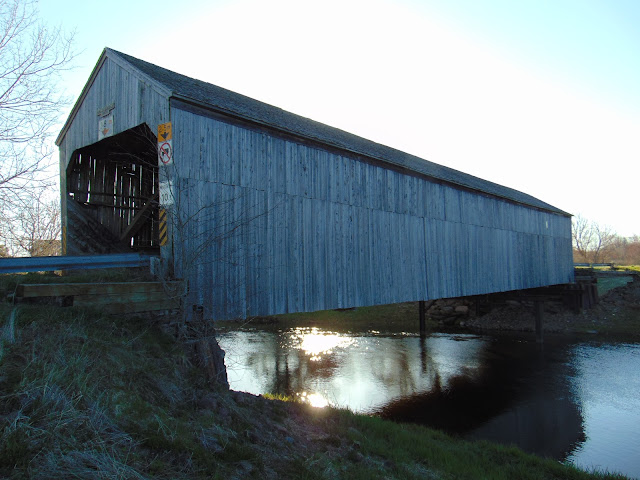 Located just west of Salisbury, New Brunswick and officially known as Petitcodiac Covered Bridge # 3, the Hasty Covered Bridge is the last remaining covered bridge over the Petitcodiac River. Built in 1931, the Hasty Covered Bridge is built in a Howe truss covered bridge design and is 126 feet (38 meters) long. As is the base of many covered bridges in New Brunswick, a headache bar has been put in place to help ensure that over height vehicles do not strike the bridge. The bridge can be found just to the south of NB 106 on Powers Pit Road, a local road with houses and farms alongside it. However, there is a pull off to the north side of the bridge so you can take photos of the covered bridge.

The Hasty Covered Bridge is also popular with paddlers. Since there is a boat launch on the north side of the bridge, you may find that people on canoes and kayaks are commonly seen around the covered bridge. When exploring around the covered bridge, you may find that the bridge does have some twisting and tilting towards the right, and this is due to repairs that have taken place on the bridge over the years.

Still, the Hasty Covered Bridge is not far off the beaten path and is worth the visit if you're checking out the covered bridges around Salisbury. My visit was earlier in the morning, so I had ample time to explore the covered bridge all by my lonesome.