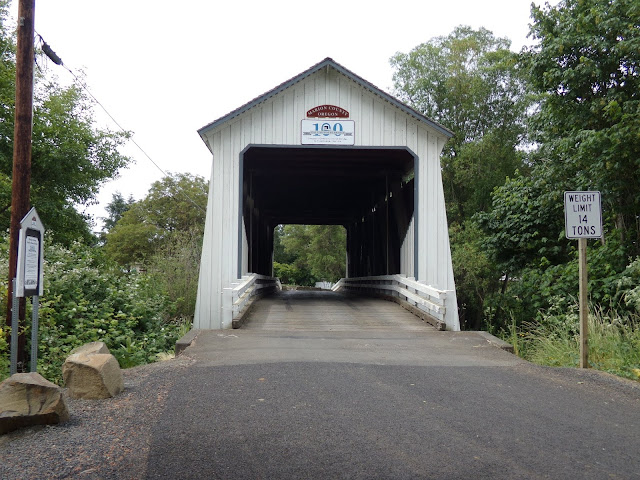 You see, at the time, Silverton was a dry town comprised mainly of Protestants and Mount Angel was a wet town populated with Roman Catholics who hailed from Germany and Switzerland (and even today, Mt. Angel shows off its German character). In 1904, Oregon voters approved the Local Option Act that allowed each city to ban the sale of alcohol. Silverton citizens had voted to be dry while Mt. Angel voters chose to allow the sale of alcohol. According to local lore, an enterprising saloon owner built a small house on the north end of the bridge and stocked it with liquor. Residents of Silverton who wanted to partake in alcohol walked the two miles each way or so to the bridge, crossed over to the Mt. Angel side and purchased a bottle, jug or jar and returned home. People got around the law by selling the gallon jugs, but giving away the spirits, hiding the money transfer that made it a sale rather than a gift. Although this was in violation of the spirit of the state law, it was perfectly legal as long as nobody wrote out a receipt, or even if the receipt was for the bottle rather than its contents. As a result, Mt. Angel bottle and jug merchants did a brisk trade taking care of thirsty visitors from Silverton who met each other at the covered bridge, hence the name Gallon House.

After the age of Temperance and Prohibition, the Gallon House Bridge faced the typical whims that a covered bridge faces. During the famed Christmas Flood of 1964, the bridge was swept off its footings and suffered considerable damage. As  it was the county's only covered bridge, the Marion County Board of Commissioners decided it should be repaired and maintained as a historical landmark. In 1985, the bridge was closed to all traffic when a damaged chord rendered the bridge useless. County road crews repaired the bridge to accept traffic up to a 10-ton limit by reinforcing a lower chord, as well as making repairs to the beams and flooring. In 1990, because of poor structural condition, the bridge was rehabilitated further. In 2016, the bridge celebrated its 100th anniversary, and today, you can bike, walk or drive across the bridge.