Southbound
The only new signage put up north of I-195 in Fall River is southbound for I-195. New diagrammatic advance signage has gone up at both the 1 Mile and 1/2 mile points. Here's the 1-Mile: 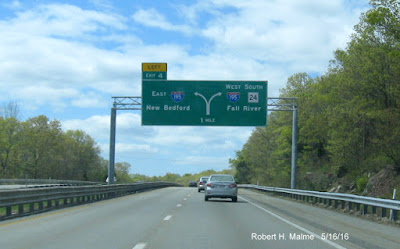 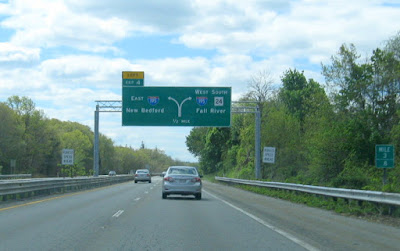 For those following MA 24 to Newport, there is information on this auxiliary sign placed between the 1 and 1/2 mile signage: 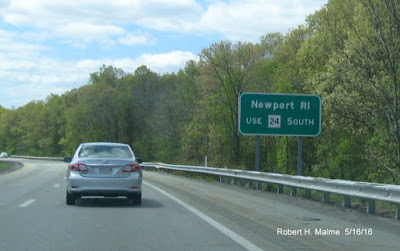 The overhead signage at the exit itself  splits the signage with the left-hand sign getting the yellow 'Left Exit' tab. The proposed milepost exit number is 3 (more about this below): 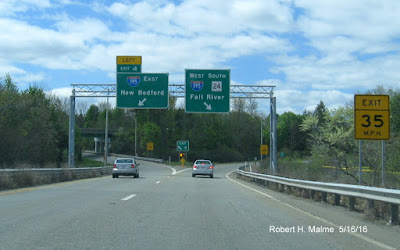 Ground reassurance signage after the on-ramp confirms the I-195/MA 24 duplex, though the square 24 sign with the large black border would look better in Connecticut: 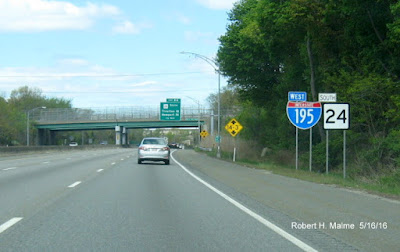 The 1/2 mile advance sign can be seen in the distance. Here's a closer view: 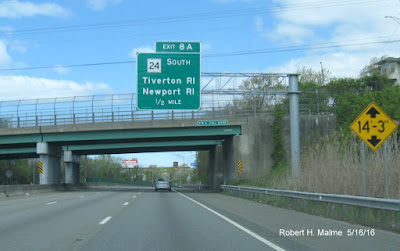 The exit signage at the ramp itself had not been replaced. The next new sign is for Exit 2: 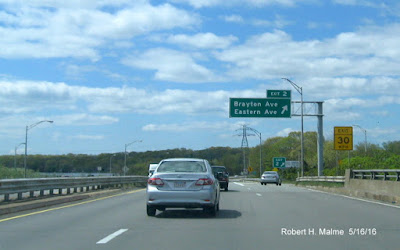 Because of the short distance between the ramps from I-195 and what would be Future Exit 1, there is no advance signage. Not the case for the last exit in Massachusetts for MA 81: 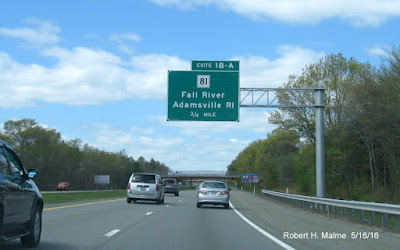 Where 3/4 miles serves as the first advance sign followed quickly by a new 1/2 mile sign for, as recent MassDOT sign practices, just the MA 81 North exit: 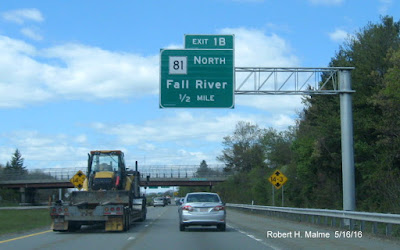 The last pair of new signs are at the ramp to the MA 81 North exit, with a 1/4 mile advance for MA 88 South, which is proposed to be Exit 0A: 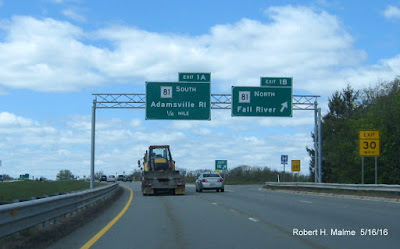 The last new overhead sign southbound, and in Massachusetts, is for MA 81 South, 2/10 of a mile from the state line: 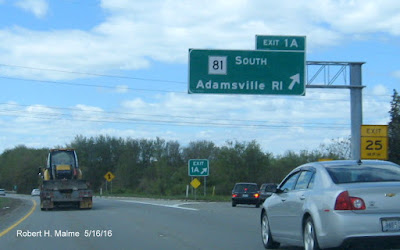 Northbound
The first exit signs northbound for MA 81 are just prior to the southbound exit ramp across the state line, apparently MassDOT hasn't given enough money to RI to put up advance signs in that state: 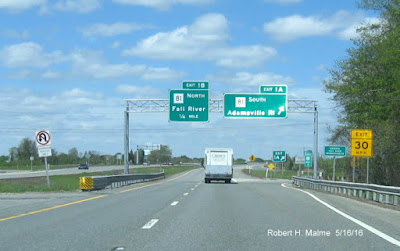 There's another new sign for MA 81 North at the exit ramp: 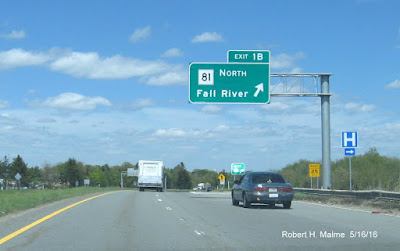 There is advance signage for the Brayton Ave./Eastern Ave. exit northbound at 1 Mile: 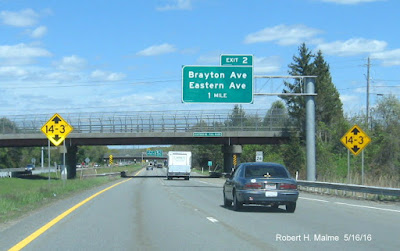 The 1/4 mile advance for what is proposed to be Exit 1A is paired with the first sign for I-195 proposed as Exit 1B: 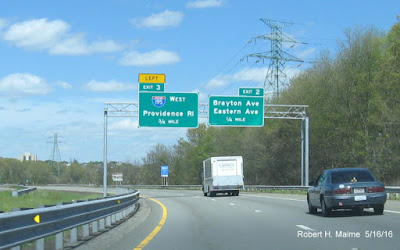 The 3/4 mile advance for I-195 West is the last new sign put up on this section of MA 24 (with the exception of at the ramp split where there is a ground mounted sign, not photographed. After the merge with I-195 East there is another pair of reassurance markers with the same wide black border for MA 24: 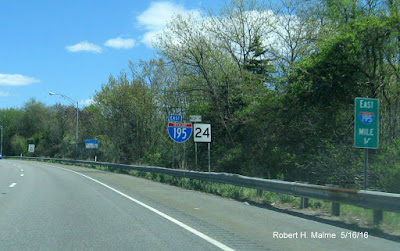 The only new sign for the MA 24 North exit is at the ramp itself: 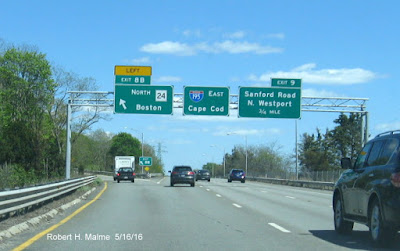 This includes, as you can see both an I-195 pull through and an advance sign for the Sanford Road Exit. The last new sign related to this project on MA 24 North is a reassurance marker after the on-ramp from I-195 West: 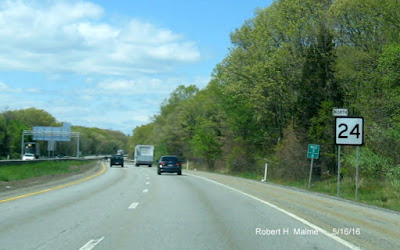 Same shield design as seen on I-195. For a bonus sign, here's an orange real time traffic sign put up on MA 24 South that, unlike signs being put up recently, is working after being installed prior to the construction project that is rebuilding the MA 79 interchange at I-195: 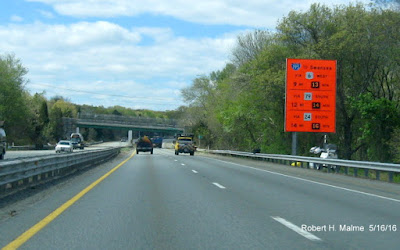 For a look at Real Time Traffic Signage in Place or Diagrams of Future Signs, Visit my Misc. Mass. Sign Gallery. The rest of MA 24's signage is due to be replaced in a contract that will start in the Winter of 2016/2017.

B. Milepost Exit Conversion Project Update
The winner of the contract to revise exits on Massachusetts interstates and other expressways to the milepost numbering system was announced to be Liddell Bros. of Halifax in late October 2015. No work has begun on the project since, and little has been said officially about the project at all. Officials at the MassDOT Highway Division, particularly Administrator Tom Tinlin, have apparently been rethinking the project after news of the project got out and complaints began being received by other state officials, citizens and politicians. It all started with this December 15, 2015 Article in the Worcester Telegram & Gazette which discussed Connecticut's project that was renumbering exits on I-395. The FHWA official interviewed indicated to the reporter that MassDOT was planning a project to change all the state's exits within the next couple years, the reporter, Elaine Thompson, called MassDOT about this but got no reply, which she then reported in the paper.

In late February, an official from the Cape Cod Commission, the area's chief regional planning agency, got a hold of plans for the project to replace the exit signage along US 6, the Mid-Cape Highway to start this fall. The plans both showed large overhead exit signs and new exit numbers, both changes which had not been communicated to the regional agency. In a February 23 Article in the Cape Cod Times, it was reported that at a meeting the previous night Administrator Tinlin had been asked to speak to the group about the US 6 plans. Instead of supporting the exit conversion project, he instead said the plans they had seen were the result of  “Someone hit(ting) the ‘send’ button when they shouldn’t have.” He called the project preliminary and that discussions had only started with the FHWA about conversion, never mentioning that a contract had already been awarded to change the numbers.

In a Follow-Up 'Watch Dog' Article in the Worcester Telegram & Gazette in March, some of which used information I provided, Elaine Thompson indicated that MassDOT had not contacted any of the regional planning organizations she talked to and and speculated that this was due to backlash it was getting from the original December article, and the reaction on Cape Cod. Other reporters writing about the possible exit number change, also got a similar reaction from MassDOT. Here's a late March article from the Attleboro Sun-Chronicle where the reporter also indicated no response to his inquiries from MassDOT, nor that any of the regional boards he contacted new of the proposal.

In April, MassDOT announced the winner of a contract to replace signage along I-495 between Raynham and Bolton to start this summer, Project 606620. The winning bid announcement was postponed for a week so that an addendum could be added to the contract. The addendum included this new paragraph:
"The project plans and details for these sign panels presume that the existing exit numbers within the project limits will be converted from the present sequential numbers to a referenced-based (milepost) numbering system. However, the Contractor is advised that this conversion may now be deferred until a later date. Accordingly, while the new exit number plates (tabs), gore, and other signs shall be fabricated of sufficient width to accommodate the future exit numbers, the Contractor may be directed to provide the current sequential exit numbers on new signs for now. MassDOT shall inform the Contractor of which numbering scheme to use on new signs prior to submission of the sign face drawings for review and approval."

This addendum was later added to awarded contracts for sign replacement on the Mass Pike which were awarded this past October and in March, according to this May 10 Post in AARoads Forum.
MassDOT had already announced in late April that the Exits on US 6 would not be Renumbered  and that Administrator Tinlin was still evaluating the benefit of converting the rest of the exits in the state.

So, what will happen? We should know in a few months time once the I-90 sign contractors are ready to create their final shop drawings for the Mass Pike signs and will ask MassDOT whether to use old or new numbers. My guess? I believe the project will go forward, though possible more slowly than first proposed. One, when the announcement was made about the US 6 exits, MassDOT could have said the whole project was canceled or postponed, they did not. Second, has to do with the theory of 'sunk costs,' that is that government agencies usually have a hard time stopping a project once money has been spent to on it. This project has been in the works for several years, was awarded to a private contractor, and will get 90% Federal funding to pay for it, all of which makes it hard for MassDOT to walk away. When the decision is finally made, I will post the news.

David said…
is this the place to note that this is all a 'solution' in search of a problem? it looks like a good old fashioned wake-work program. And to whom do I complain about Logan changing 'Deparuresk to 'Departing Aircraft?' I'm dropping off a departing passenger, not an aircraft.
7:45 AM

Unknown said…
Today is Jan 31 2022. After months of really trying hard to get accustomed to the non-sequential exit numbering, and having made several errors, and having compared the pros and cons, I would like to advise all concerned, especially the people who signed off on this project, that the project is a total failure.

I urge all citizens to add their name to this call to change back to sequential ASAP !!!