By Adam May 28, 2016
Well Interstate 36 tags won't be climbing up the blog list after all.  The American Association of State Highway and Transportation Officials (AASHTO) reviewed North Carolina's two interstate requests of Interstate 36 for the US 70 Eastern Corridor and Interstate 89 for the US 64/17 Raleigh-Norfolk Corridor and suggested two different numbers that NCDOT agreed to.  They are:

Interstate 42: This is the Clayton /Morehead City Super 70 Corridor.  It appears that AASHTO wanted to have continuity with the numbering grid.  I-42 will run completely north of Interstate 40.  NCDOT's concern for duplication with NC 42 was overruled.  Now, the question is will NCDOT rename all or part of the NC 42 which intersects both Interstate 40 and Interstate 42 before/after the new Interstate's western terminus.  The exit after/before what will be I-42 on Interstate 40 is NC 42.  In fact that intersection is known locally as "4042".  In fact, there was a local news and information themed website with the domain name 4042.com. (The website changed names in 2015 - foreshadowing perhaps?)  Also, the first/last exit before Interstate 40 on what will be I-42 is NC 42.   In addition, the distance on Interstate 95 between Interstate 42 and NC 42 will only be 29 miles.

I did ask NCDOT if as a result of AASHTO's decision will they renumber NC 42.  As of the publication of this blog entry, NCDOT has not responded.


NCDOT, however, was quick to produce Interstate 42 shields at the recent ribbon cutting ceremony for the completion of the US 70 Goldsboro Bypass.  Photo via WNCN. 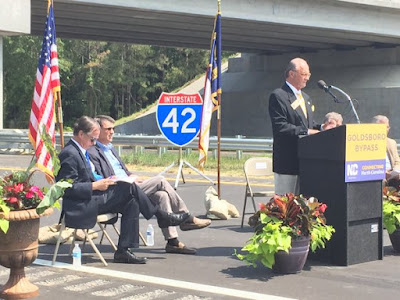 Interstate 87:  This is the number for the Raleigh to Norfolk US 64/17 corridor.  I am surprised AASHTO kept it as a North/South route.  Also, this seems to be AASHTO trying to be consistent to the numbering grid as much as possible.  Like Interstate 89 in New Hampshire and Vermont, Interstate 87 exists in New York and this would be a duplication.  Instead, AASHTO tried to stick to the grid and the Raleigh - Norfolk corridor lines up with Interstate 87 better than Interstate 89.

I don't think NC DOT will try to renumber NC 87, a pretty lengthy route itself, as it is far enough away from the I-87 corridor to be entirely confusion.

So what's next?  The designations are pending the Federal Highway Administration's (FHWA) approval.  Once granted, NCDOT can start erecting signs.  I do expect that once NCDOT gets the FHWA's blessing, they will petition AASHTO for the approval to place Interstate shields on portions of these two corridors.  For I-42, full Interstate status for the Clayton and Goldsboro bypasses should be requested. For I-87, I-40 to US 64 Exit 429 should also be requested.  Time will tell - the next AASHTO

kdub1 said…
On one hand, the feds made a major error with the destinations but on the other hand, NCDOT has only itself to blame due to the 540 fiasco less than a decade ago. Once DOT decided to duplicate 540 as a state road in conjunction with the interstate, it violated its own policy
4:10 PM