By Bob Malme November 08, 2015
Got a chance this past Saturday to drive along Connecticut's I-395 from where the route joins the original Connecticut Turnpike, that is secretly designated (not signed) as CT 695 to where CT 2A leaves the interstate south of Norwich. I-395 is the first freeway to be given milepost-based exit numbers by the State of Connecticut (along with CT 2A and CT 695). The original numbers run from 77 to 100 and are those of the Connecticut Turnpike (up to 90) which start at the New York border The new numbers will run from 2 to 53. The state's plan is to convert the rest of its freeways over the next 10-20 years as part of exit sign replacement contracts. The I-395 project was split in two with the first section to be started that between I-95 and old Exit 88. Many photos have already been taken of signs along this section, check out Jay Hogan's I-395 Flickr Page.

Here are some of the photos taken of new exit signs and numbers north of Exit 88.

OLD EXIT 90 / NEW EXIT 35
I only got to take photos of this exit northbound. The new signs are ground-mounted, replacing overhead signs. The overheads are still in place with I-395 pull-through signage: 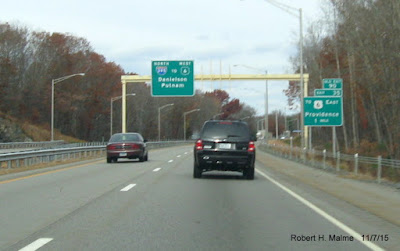 Here's the next overhead assembly with the new exit sign in the distance: 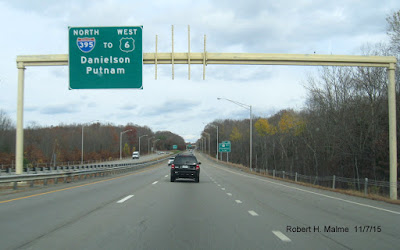 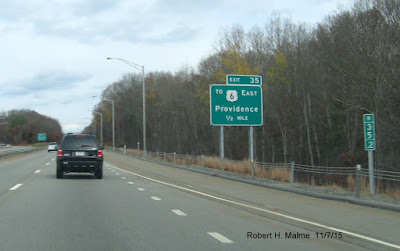 The same situation approaching the exit ramp itself, old overhead with missing Exit sign and new sign ground-mounted beyond: 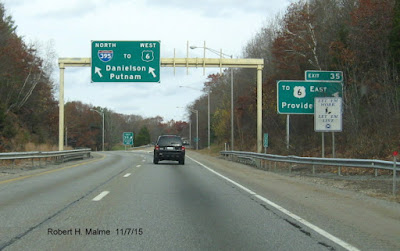 Hopefully, they'll cut back some brush and move the sign in front. They've also replace the exit signs after the off-ramp on SR 695, photos below.

OLD EXIT 89 / NEW EXIT 32
The first new signs I saw heading southbound were for the CT 14 exit. These photos show the typical new signage set-up for each interchange. Starting with the 1-Mile Advance Sign: 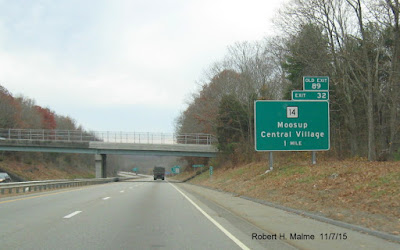 In addition to the new number on the exit tab, there is an additional tab above with the old exit number which will stay up for 2 years to acclimate motorists to the new numbering system. The 1/2 mile advance sign does not have the Old Exit tab: 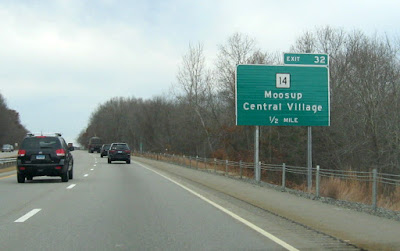 In this case, the sign apparently is not finished with the bottom panel still needing to be installed. Between the 1-Mile Advance and the Exit signs at the interchange's off-ramp there are typically several auxiliary and blue informational signs with the new number. Here's an auxiliary for CT 14: 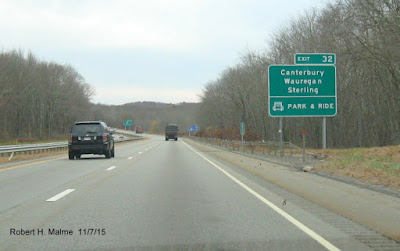 A blue services sign can be seen in the distance. The final signs are at the off-ramp itself: 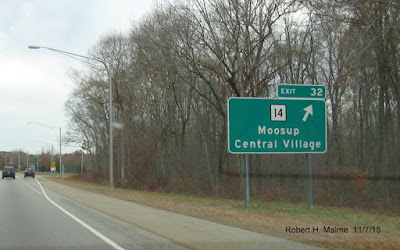 Connecticut exit signs seem to feature larger exit tabs than most states. At the gore point the signs show both the new and old number, as with the 1-Mile sign the Old Exit tab will stay up for two years: 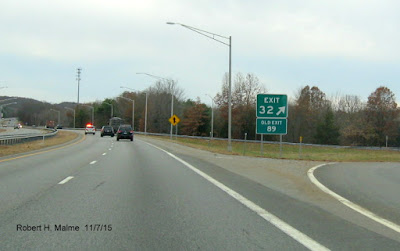 Similar signage for CT 14 is also installed northbound. Here's the progression as seen above, starting at the 1/2 mile advance sign: 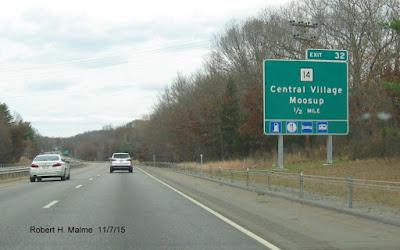 Here's signage at the interchange itself: 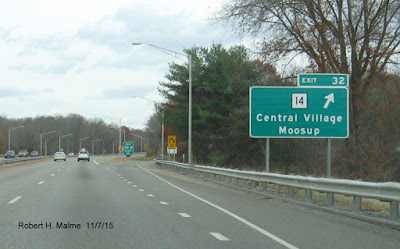 With the new number/old number gore sign in the background.

OTHER SIGNS
With the new milepost numbers has come new mileposts which are posted every 2/10 of a mile with an I-395 shield and direction provided at the mile. Here's two examples, southbound: 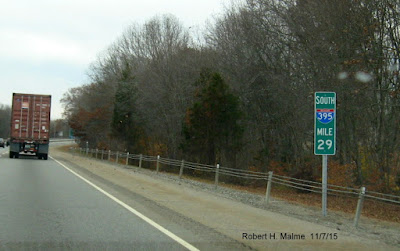 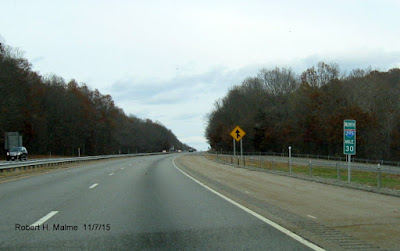 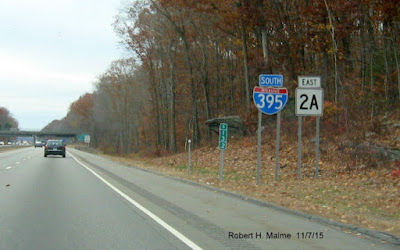 Here' with a route marker for CT 2A East where it runs concurrently with I-395 south of Norwich. And northbound: 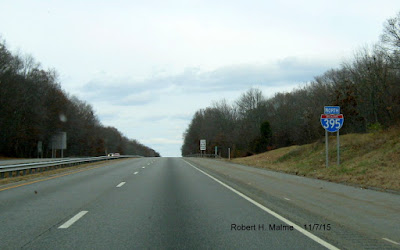 SIGNS ALONG SR 695
In addition to I-395, CTDOT has started placing new signs on the section of the original Connecticut Turnpike that runs between I-395 and US 6, with Secret Route (SR) number 695. The signs have only been placed heading east toward US 6 as of now. Here's the 1/2 mile advance sign for Ross Road with new Exit 1 tab (the previous sign had no exit number): 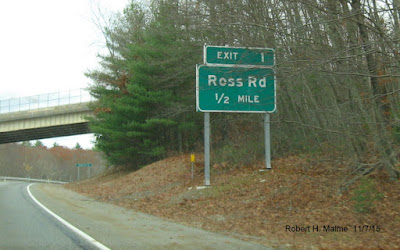 Again, some pruning could be done to make the sign more visible. Here's the signage at the off-ramp: 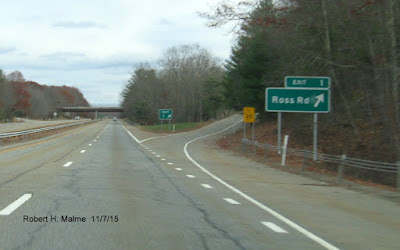 SOME ADDITIONAL PHOTOS
Here's some additional photos taken mostly southbound of signs from the first phase of the project that have not appeared elsewhere online.
NEW EXIT 29 / OLD EXIT 88
The one mile advance sign southbound: 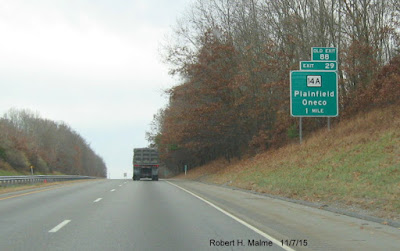 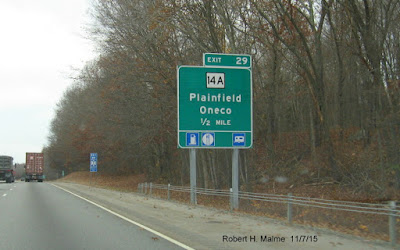 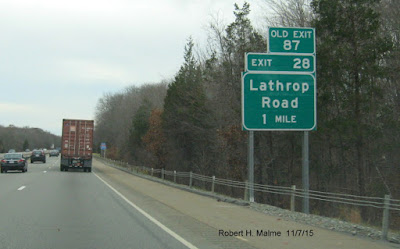 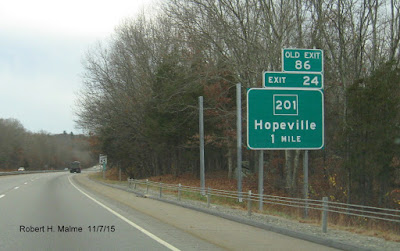 In this case, the new sign hasn't been installed but the new Exit and Former Exit tabs have been placed on the existing sign.
NEW EXIT 14 OLD EXIT 82
The 1/2 mile advance sign southbound 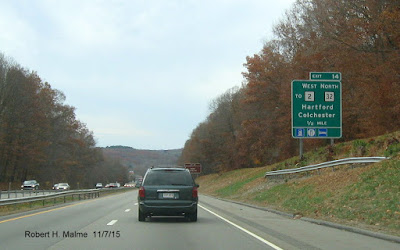 And here's the signage at the exit itself, an overhead mixture of the old and new: 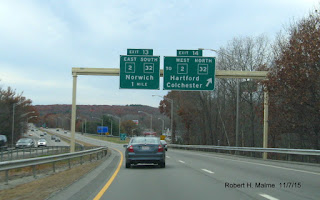 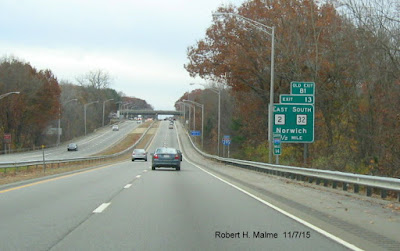 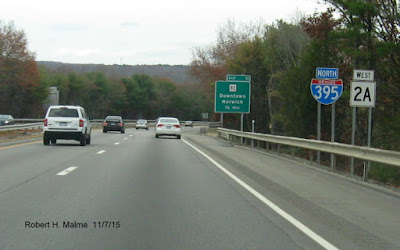 And finally, an exit sign that seems to be missing its exit tab: 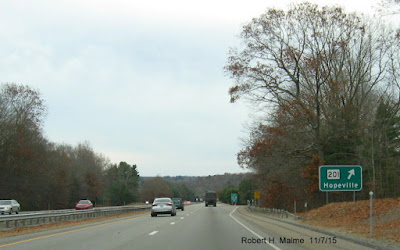 roadman said…
As always, excellent photos Bob. And many of them prove one problem with going from overhead to ground-mounted panels - the need to do periodic clearing and grubbing of the roadside brush.
12:39 PM