By Adam November 26, 2015
People have a love hate relationship with Breezewood, Pennsylvania.  It's either loved as a unique piece of America and road travel.  (Editor's note: In writing this entry, I couldn't find any article, blog post or webpage that says how wonderful Breezewood is.) Or it is hated, despised, or even boycotted.

This post isn't about my personal opinion of it. In the past five or six years, our family typically goes through Breezewood between 9pm and midnight on our way from Eastern North Carolina to Pittsburgh - and I have never experienced the notorious backups that people dislike so much.  But I digress.

Earlier this week, I came across an amazing website that features aerial photos of Pennsylvania from the late 1930s to the early 1970s.  It is called Penn Pilot - and is hosted by Penn State University.  Trust me, you can waste a whole day looking at this site.  It's a wonderful resource.  So one of my first looks was Breezewood to see if they have pictures of the evolution of the town.  Fortunately, I did luck out.

The first image below is of Breezewood in 1958.  The Interstate Era was in it's infancy.  The PA Turnpike System was still the pride of the Commonwealth, and a connection to Baltimore and Washington via Interstate 70 was in the very early planning stages (if at all). 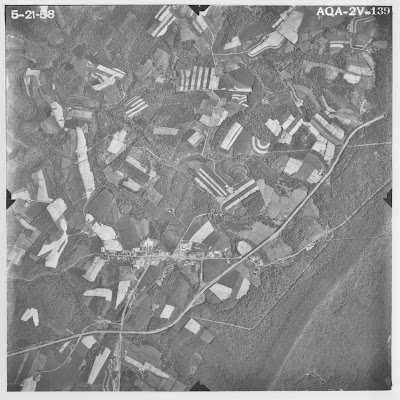 The original turnpike alignment is still going strong.  The connection was solely with US 30.  However, if you expand the photo to full size, there are still some key pieces of Breezewood being the gateway and connection point from PA and the Midwest to Baltimore and DC can be seen.   PA 126 runs from US 30 - just west of the interchange - south out of the picture towards Maryland.  What I find interesting is the more modern design for the turning movement from 126 North to 30 East and eventually the Turnpike.  Breezewood was the Gateway to the South before Interstate 70 even arrived.

For reference, I-70 will eventually tie in between 126 and the original Breezwood interchange.  Also of note, sitting on the north side of US 30 between the interchange and 126, is the then recently opened Howard Johnson's Motor Lodge.  The Gateway Travel Plaza sits right below it.

Now let's fast forward to 1967.  The Interstate 70 connection has been open a couple of years and Breezewood was entering its heyday of being known as the "Town of Motels". 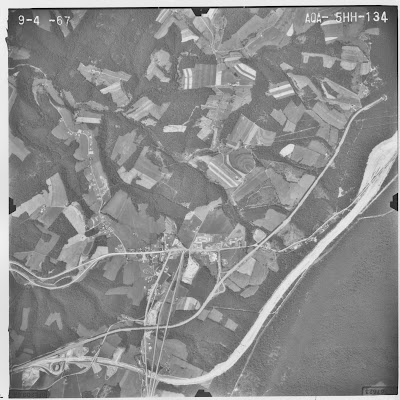 The turnpike was well underway in constructing a new 13.5 mile alignment.  This aerial shot shows the brief time period of how Interstate 70 connected to the old turnpike alignment.  Also, the US 30 intersection with the now defunct PA 126 has changed.  US 30 to the east has been twinned as it heads westwards to Everett.

Breezewood changed a lot in the nine years between photos.  The popular Post House opened in 1963 and sits just east of the 70/30 intersection.  The beloved Post House closed in 2004. (Editors Note: I stopped there at least twice in the 1990s on various college bus trips.) The Howard Johnson's added a new building.  And many many other motor lodges and motels have since opened.

So in 1967, Breezewood most likely looked something like this. 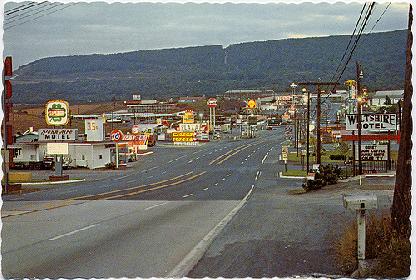 Of course nearly 50 years later, a lot of these motels have been re-branded, abandoned or even torn down.  The old alignment of the Turnpike is now an attraction for bicyclists, roadgeeks, and the adventurous.  And who knows what Breezewood will look like in the next 20 years. Yet one thing that hasn't and most likely will not change is that you will still have to experience the 2000 or so feet of the Breezewood Strip to get where you're going.