Another I-93 Update (Plus Other Signs)

By Bob Malme April 29, 2013
I'm in the process of graduating with a second Master's degree and looking for work. Both these activities led to trips up the I-93 Southeast Expressway and back on Saturday, and along the lower '128' Beltway this morning. I used the opportunities to check out progress on sign replacement on I-93 and take photos of other interesting signs I saw along the way.

1. Southeast Expressway Trip (4/26/13)
I took the expressway from Braintree into Boston Saturday dodging post-accident congestion heading in and waiting for a funeral procession to clear the route south to Columbia Road heading back. There has been further progress in installing new signs at the expressway on-ramps: 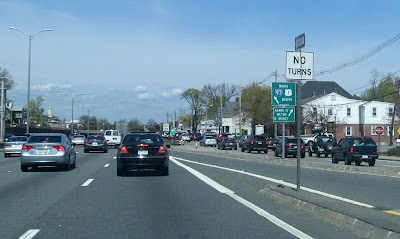 Here northbound at East Milton Square (Exit 9) they replaced a perfectly acceptable I-93/MA 3/US 1 guide sign with the new standard North I-93/US 1 Boston seen elsewhere. They have also replaced the signage for both directions along Granite St (Exit 11 'To MA 203), southbound seen here: 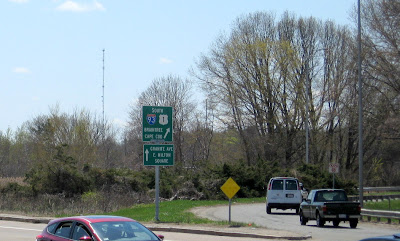 This leaves only the on-ramps for Exits 12 and 14 to be changed. There is only an on-ramp southbound for Exit 14. The signs for the MA 3A Neponset exit are a combination of ground-mounted Mass Guide/Green Signs (MGSs) and overheads. It appears the overheads will not be updated until work starts on replacing the overhead signs along the SE Expressway. This will not start until the work between Braintree and Randolph is completed (see below).

Since I took the Mass Ave exit on my return to I-93, I took the liberty of taking a couple photos there: 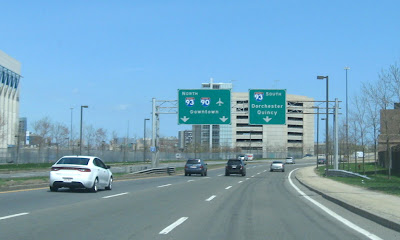 Above is one of the 'implied I-90/I-93 multiplex' signs, and one of the few now remaining with button copy numbers in the interstate shields. The actual split of the ramps features some ground level signage: 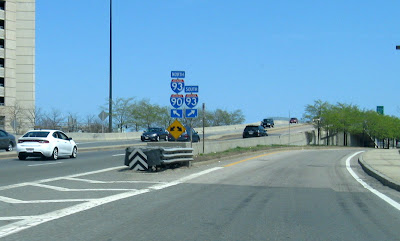 The signs should indicate you reach I-93 South only after going through 2 stoplights, and in my case, waiting for a funeral procession to pass by on its way to South Boston.

Returning south the entire length of the Expressway, I got to take photos of a couple previously installed signs I saw in my last trip, but did not have a camera ready. These two (if you look closely) are at the south on-ramp from Exit 9 in East Milton: 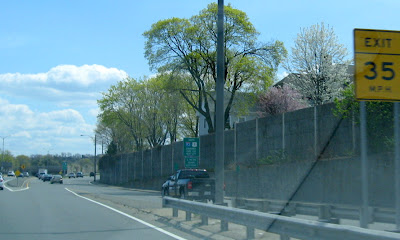 No changes to route shields on the Expressway itself, only a few new regulatory (speed limit) signs.

2. "Route 128" from Braintree to Randolph
Work is proceeding in placing the foundations for the future overhead signs. I have learned that the contractor plans to put up all the signs along this end of the project first, before tackling the Expressway section. The first work was to put in the foundations between Exits 6 (MA 37) and 5 (MA 28). It appears that all the foundations have been placed going south, they still need to put in at least 1 foundation for the MA 37 ramp sign northbound. Here's one for the sign before, the future 1/2 mile advance sign: 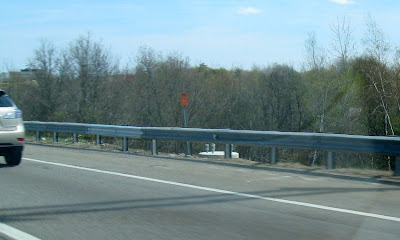 They are now working southbound between Exits 5 and 4 (MA 24) with median foundations done earlier this week and today working on those on the right shoulder. I assume then they will start working back the other way. One foundation has been placed in the median between Exits 6 and 7, but no other work was seen in that area.

3. Other I-93 and Misc. Signs
My travel today took me further along '128' to Dedham. I took some photos along the old US 1 route, which is still not old according to this sign: 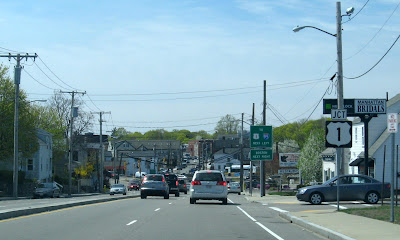 This is approaching Providence Highway from Washington St westbound. The US 1 sign here looks too new to predate the move of US 1 in 1989. It may have even been put up after the 'To US 1/I-95' MGS in the background. Here's a close-up which has a unique take on the US shield border than typically seen in MA: 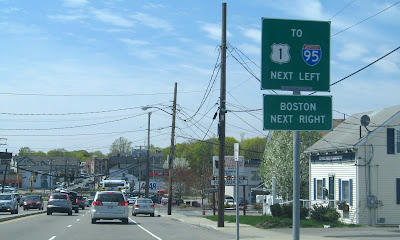 Could this (and the misplaced US 1 sign) have been put up by someone else than MassDOT?

Washington St continues across Old US 1, and originally was the start of MA 1A. Today there are signs directing people 'To MA 1A' as seen here: 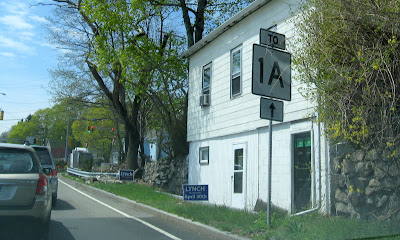 Drivers exiting I-95/MA 128 at Exit 15A, to discourage them from crossing 3 lanes of traffic to make a left turn onto MA 1A/Elm St, are directed to north about a mile before told to take a left to get to MA 1A. You can do this much easier by taking a right at Elm and turning around (there's a MA 1A straight arrow sign approaching the intersection from that direction. Meanwhile, here's the signage at what is the intersection of Washington St and Elm St where supposedly MA 1A North turns to terminate at US 1, and going straight takes you onto MA 1A South, yet there is no MA 1A signage at all: 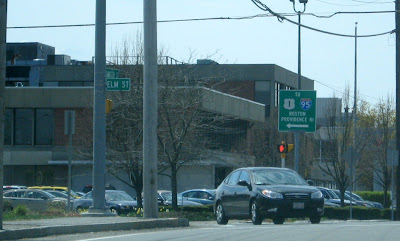 Just another To US 1/I-95 sign, standard MassDOT issue, this leads you a block east before intersecting Providence Highway.

Leaving Dedham behind, I went to check out a construction project that is closing lanes on I-95 south of MA 128. Could not tell what work was being done, perhaps fixing the right shoulders prior to re-paving the road. No new signage, so here is the last on-ramp sign northbound for I-95 along eastbound Neponset St, where it is not also MA 128, until Peabody: 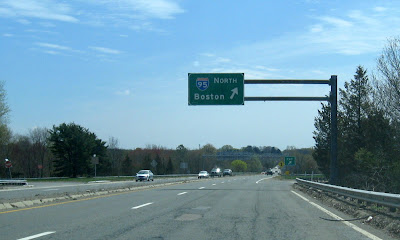 Finally, I took the liberty of taking photos of two new I-93 North signs. A new practice in MA is putting up overhead signs along an on-ramp, here from I-95 North to I-93/US 1 North for the MA 138 exit: 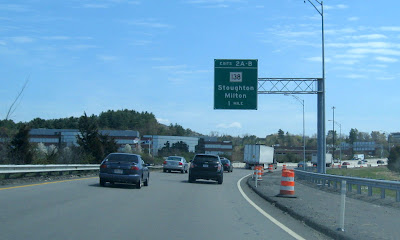 It duplicated the MA 138 exit on the mainline between the I-95 on and off-ramps. The newest sign is here: 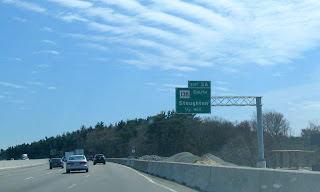 This one for Exit 2A MA 138 South. As you can see they are still working on completing this section of the widening project. MassDOT decided after the project started that it might be a good idea to turn the off-ramp from I-95 North into an exit only lane for the Stoughton exit. This has taken longer than expected. Hopefully the placement of the new overhead means they are getting closer to finishing. I will update the blog when more new signage is placed.