By Bob Malme April 10, 2013
I took a quick trip along I-93 this afternoon in the Quincy, Braintree and Randolph areas to check up on progress on the sign replacement project going on along the interstate from Exit 4 to Exit 20. This project started in the fall of 2011 but, until recently, little significant progress had been made in updating route or exit signage. I noticed, however, last week that the Mass. Guide (or Green) Signs (MGSs) at a couple on-ramps to I-93/US 1/MA 3 Southeast Expressway in Milton, that had been up since the 1980s and had I-93 and MA 3 shields, had been replaced by newer versions sporting I-93 and US 1 shields. I decide to take a look today at the roads leading to the interchange to the south, Furnace Brook Parkway, Exit 8, to see if those signs has been changed as well. The MGS at the on-ramp to I-93 North already had been updated in 2011. As this photo shows, the signage at the road leading to the north on-ramp has the new 2 route designation: 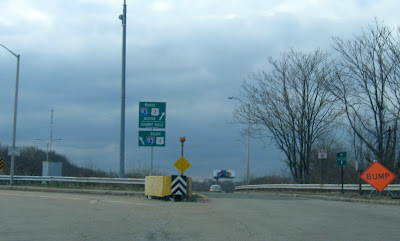 Quarry Hills, listed below Boston on the top sign, is a golf course built in the old Quincy granite quarries.

Signs at the southbound on-ramp had been changed as well: 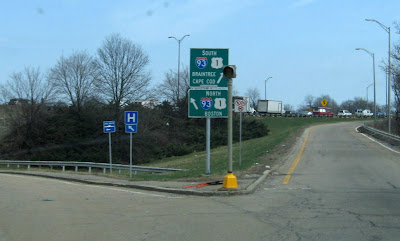 Despite the dropping of MA 3 from these signs, the southbound control 'cities' have stayed the same. Needless to say, neither I-93 nor US 1 goes to Cape Cod, at least as of right now. With the installation of these new on-ramp signs, only Exits 11, 12 and 14 (SB only) now have the now out-dated I-93/MA 3 signage.

There are no new exit or route signs south of Exit 8, for now. There are signs (sorry), however, that this will change soon. The contractors have completed placing foundations for new cantilever overhead signs along I-93/US 1 South for the first two MA 28 exit signs: 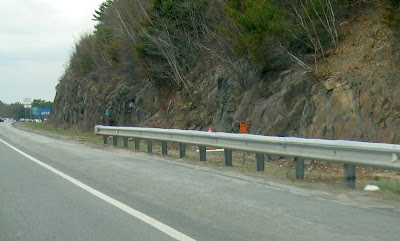 If you look behind the guardrail you can see one of the new sign foundations under an orange traffic cone, which is behind the orange tag with the project's sign number on it. This is apparently going on at the same time they have been closing lanes in the area at times to replace sections of guardrail.

There is also a completed foundation just behind this 1/2 mile sign for MA 28 North, I took the photo in case this sign is replaced soon: 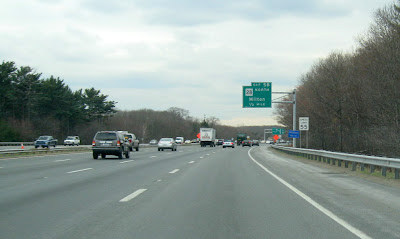 I took a photo of the next overhead assembly for MA 28 as well for historic documentation (am a practicing archivist now, someone should have a photo before the current signs disappear). 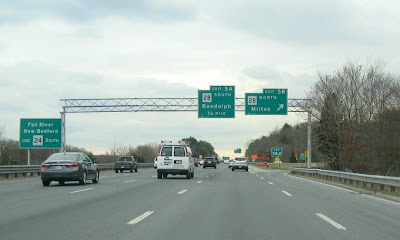 This assembly had no new foundations with it, nor the overhead 1/4 mile before for MA 24. The auxiliary sign for MA 24 in the photo is to be replaced as well. Taking the ramp for Exit 5A (already with a new sign put up in 2010) and turning around heading north, I also noticed a new sign foundation completed for the 1 Mile Exit sign for MA 37 and a foundation still under construction for the 1/2 mile MA 37 sign.

Lastly, two of the intersecting routes between Randolph and Braintree have overhead signage that, while not inaccurate, are outdated and  will be replaced as part of the I-93 project. This includes these signs on MA 37 North by the South Shore Plaza: 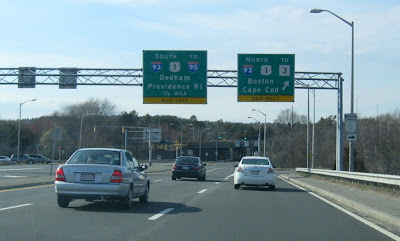 The button copy Interstate shields are no longer MA sign practice and Canton has replaced Dedham as a control city for South I-93/US 1. The US 1 and arrow assembly on the light pole to the right predate the overhead signage and were put up when the overheads just referred to I-93. I am assuming, given its condition, that this will be removed too.

It is unknown whether the contractor plans to put up new sign support foundations for the entire stretch of I-93 from Randolph to Boston before placement of new sign supports and signs, or whether they plan to complete all the work along the '128' segment of I-93 first (Exits 4-7) and then move on to the Southeast Expressway portion (Exits 7-20) at a later date. I'll be monitoring the situation over the coming months, so stay tuned.