By Bob Malme December 31, 2012
This past year has been seen a couple significant milestones with regard to building I-73 and I-74 in NC. The new year offers a few more, including the largest addition to the mileage of both routes since they were first established. I'll cover each route for 2012 and then talk about what's in store for 2013.

Year in Review I-73
The most significant project, which affected I-74 as well, was the completion of the interstate upgrade work through the Asheboro area. When the FHWA agreed to the establishment of I-73 (and I-74 in NC) in 1997 they prohibited NCDOT from signing any more of the US 220 corridor north of what is now Exit 68-US 220 Business/NC 134 as an official interstate route(s) until several deficiencies in the Asheboro stretch were fixed. The contract to fix these problems was let in 2010 and was completed, officially, in early November. This not only allowed NCDOT to sign what was 8 miles of Future I-73/I-74 as Interstates 73 and 74 with the completion of the project... 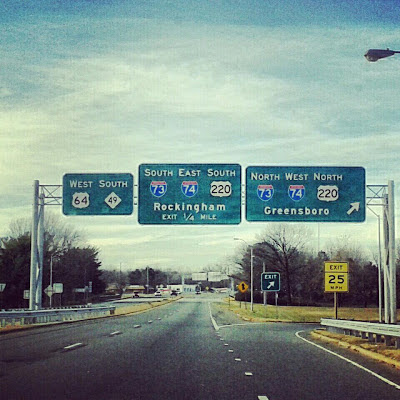 (Thanks to Chris Curley for the above photo). But also allowed NCDOT to commit to signing the remaining sections of US 220 as interstates, both north and south of Asheboro, as well (more below).

The other significant event involving I-73 was the start of construction of what section that will run along US 220 north of Greensboro. The first part of what will create a freeway connector between NC 68 and US 220 started with the US 220 widening project, which will create a freeway on what is now a 2-lane portion of US 220 from the Haw River north to NC 68. The contractor has made progress clearing the path... 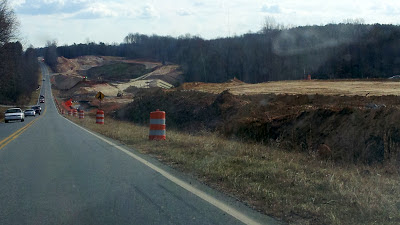 and starting to build the roadbed (photo courtesy of AA Forum poster, Strider). Though the project is behind schedule. Work on all the widening (including 8 miles of US 220 south of I-73) is to be finished by 2016. Meanwhile, work will start on the Connector itself in 2014.

Year in Review I-74
Besides the Asheboro project completion discussed above, the biggest news regarding I-74 was the near completion of the remaining US 311 Bypass freeway which should open early in 2013 (more below). Substantial progress was made in completing this freeway over the past year, where progress had been slow in some areas due to unfinished bridges across the highway path. The most significant progress milestone I saw during my time in North Carolina over the summer was the start of the placement of overhead signs along the future freeway near the interchange with US 220 (I-73)... 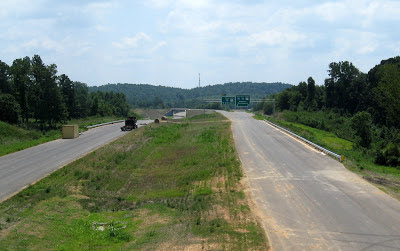 The last month of 2012 saw the substantial completion of the freeway work, with only some landscape and non-road related projects needed before the road can open. The completion date was moved from late October to April 2013 last September but it looks like now NCDOT can claim it finished the road 'early.'

While there were no other I-74 related construction projects, there does appear to be some movement in extending I-74 further east of I-95. NCDOT has a feasibility study in progress about the upgrade of US 74 from where I-74 currently ends at NC 41 to US 76 near Whiteville. NCDOT also replaced the US 74 mile markers with I-74 mileposts from NC 41 to as far east as Delco. New interchanges opened replacing intersections at NC 242 near Evergreen and NC 211 east of Whiteville. This appears to be part of a piecemeal approach to eventually creating a freeway for I-74 west of NC 211. There is a project on the books to bring the rest of the US 74-76 freeway up to interstate standards all the way to Wilmington, but it remains unfunded.

2013
For the upcoming year the most significant milestone will be the signing of the entire US 220 corridor from I-85 near Greensboro to just south of Ellerbe as Interstate 73 or Interstates 73/74. NCDOT has let a contract to replace the future interstate shields with official ones and to upgrade the exit signage to include exit numbers using I-73 mileposts for the entire stretch, except for the Asheboro area whose signage was updated with the completion of the construction project. The RFP for the contract states that the work is to start no earlier than January 13 and finish no later than October 15. News reports suggest the project could be completed by the summer.

The completion of this contract will increase I-73's officially signed miles from 34 to 78. The only remaining part of the existing route that should be signed future is the Greensboro Loop north of I-40 (this was officially approved to be I-73 by the FHWA in 2011, but NCDOT doesn't appear to want to sign it until more of the road is completed north of the Triad). This project will also increase I-74's officially signed mileage from 76 to 141, not counting the additional 7 miles for the new freeway extension to Randleman. In May 2013 the contract will be let to start building the US 220 Rockingham Bypass that will carry I-73/I-74 to the US 74 Rockingham Bypass. This part of the project will rebuild about 4 miles of existing US 220 to become an interstate freeway by 2016. The actual new bypass won't start construction until a few years later.

As for other 2013 events, NCDOT has also asked the FHWA to approve its route for I-73 from the Greensboro Loop to NC 68, part of which will be a new highway (called the 'I-73 Connector') due to start construction in 2016. With the completion of the '311' freeway to Randleman, I-74 will become a very useful route for those traveling from the Winston-Salem area and points west to get to and from the Sandhills area while avoiding Greensboro. Hopefully, there will also be word on what NCDOT plans are for I-74 east of I-95 from its completed feasibility study.

As always, you can check on my I-73/I-74 website for the latest news during the upcoming year. I plan to take a trip sometime in March to see the completed, or soon to be completed, parts of I-73/I-74 myself. As always, you are welcome to forward any news, observations, or photos to me at rmalme7374@gmail.com.

Best wishes everyone for a Happy 2013.

Anonymous said…
The contract to sign US 220 from GSO to Ellerbe has been let. http://bit.ly/156lvkn
Exit numbers are there too
12:06 AM