By Bob Malme July 22, 2008
While I was away in New England (more on that in a later post), several developments occurred regarding I-74 in NC. I'll use this post to summarize them and provide links to those who want more information.
1. Significant progress in building the new I-74 Freeway in SE NC:
According to a source, all the bridges in the section that includes the I-95 interchange are complete. This eastern section is 92% complete as of mid-July according to NCDOT. The western section is basically complete with 99% done. I assume the remainder is line-striping and signage which may wait until the eastern section is ready so it can be done at the same time. There are some photos showing the progress on the bridges at the bottom of my I-74 Segment 16 page.

2. NCDOT's Revised Recommendations for Brunswick County Traffic Plan includes new route for I-74:
The county asked NCDOT to revise its earlier plan feeling it did not provide enough new or updated roads to handle the county's future traffic. The new report proposes an extended I-74 toll route from Shallotte to the SC border, not an upgraded US 17 to interstate standards (it will be upgraded only to an expressway). The toll road will thus parallel US 17 and connect right in with the Carolina Bays Parkway at the SC border. They also want a connector route built between I-74 and I-140, but first the Wilmington MPO would have to sign off on the idea since I-140 is in New Hanover County.
More details are available on my I-74 Segment 18 page.
The NCDOT Report is available here
Comment: It seems hard to believe an extended toll facility will produce any more revenue than the original proposed route which a study said would only take in about 50% of what was needed to build the highway, especially since the new extension would parallel an improved US 17 in its entirety.

3. NCDOT may be putting up I-74 signs along the US 311 freeway between I-40 and Business 85 this summer instead of in 2011:
A couple items listed on NCDOT's traffic information website regarding lane closures for new signage along US 311 that if put together covered the entire length of the existing US 311 freeway. There were no contracts listed for new signage along this roadway except for the one building the next part of the US 311/I-74 freeway from Business 85 past I-85. This was for placing new signs with I-74 exit numbers and the putting up of Future I-74 or I-74 signs. I assumed this would be done when the route to I-85 was opened in 2011, but maybe not. Curious, I drove US 311 as a little detour on the way back from New England. There are new signposts placed behind all the current exit signs between I-40 and US 311 business, there were also two signposts placed near each of the current US 311 signs along the highway. This suggest placing of new standard multi-route green signs with both a I-74 and US 311 shields in them. Almost all the exit signs had new posts near them, there was, however, nothing new on the new section of road east of Business 311. The work is to over by the end of August, so time will tell if actual signs are going up, not just posts. If you want to see photos of what I describe above there are a couple at the bottom of my I-74 Segment 5 page.

Unrelated, but of interest. When traveling back the I-40/85 Greensboro Loop I noticed they had replaced the sloppy looking little I-40 signs next to the I-85 signs after each exit with the new standard green signs listing both routes. There was still a noticeable problem however. The I-40 shield had the 40 fill the entire blue portion, while the 85 in the other shield was smaller like a shield room for a state name, thus now if you look at it quickly it appears like the I-85 shield is smaller. Sorry no photos, too much traffic.

Here's a preview photo from my upcoming New England post: 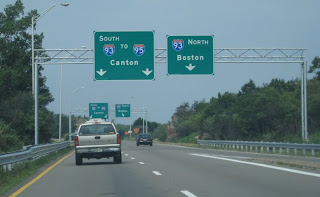 This is the some of the new signage along MA 3, specifically at the ramp leading from Washington St in Braintree to I-93/US 1/MA 3. The right sign formerly read I-93/3 North, the left signs' control city was Dedham. Now note the last two designations are not listed (US 1 may be added to the signs later, MA 3 will not) and Canton is the control city for I-93 which if more fitting because it ends there. I have more photos of the signage at this and other interchanges and will post a link in my next entry.