Could NC 172 be decomissioned?

By Adam February 07, 2007
U.S Marine Corps officials plan to close a state highway that runs through Camp Lejeune. The road, NC Highway 172, would only be open to vehicles with Department of Defense decals. The highway is a commonly used short cut for motorist traveling between the Wilmington and Morehead City/Beaufort areas. The highway totally avoids Jacksonville, and parts of the highway runs through the heart of the Military Base.

The restricted access is for security reasons, although no specific threat was named.

"It's in response to an ongoing evaluation we've had of our security," said Col. Brant Bailey, director of training and operations at Camp Lejeune.

Besides commuters looking to bypass Jacksonville, NC 172 is also shared by NC Bike 3, the Ports of Call Route.

Story via the Durham Herald-Sun. 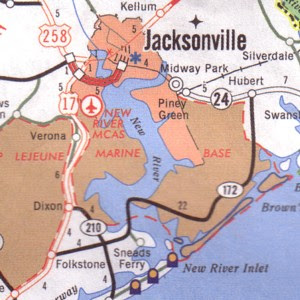 If this plan does happen, --- and from the story it looks like local leaders and a 1946 agreement between the state and the Marines will allow it -- I do not see the use for the NC 172 designation on the highway. Through traffic won't be allowed to use it.

I think another reason for it is that most of the US 17/NC 24 Jacksonville Bypass is open to the North. The new freeway bypass moves through traffic away from the congested main drags of Jacksonville, Lejeune (NC 24) and Marine Blvds. (US 17)

The military claims that the closing will add only nine minutes to the drive, while regular drivers claim more. The map image above shows NC 172, Camp Lejeune, along with the newly opened Jacksonville Bypass.

There is no hard date set for the restrictions to NC 172; however, base officials plan to educate motorists using NC 172 changes of the plan over the upcoming weeks. There also hasn't been any word that NC 172 would be decommissioned to a secondary or local route as a result, if at all.