Two dead in I-88 Washout; NY State Thruway Closed from Schenectady to Syracuse

By Adam June 28, 2006
Two truck drivers were killed early this morning on I-88 near Unadilla, NY when their rigs fell into a washout caused by heavy rainfall. The New York State Thruway is closed in both directions from Exit 28 to Exit 31. The closing is indefinite. The Thruway is only open to local traffic from Exit 25A - 28 and Exit 36 - 31. (More from the Albany Times-Union)

The washout of all four lanes and center median was a result of a failed culvert just beyond the Exit 10 interchange. The drivers, one going eastbound the other westbound, were killed when their trucks fell into the collapsed roadway. Unconfirmed reports have said that the bodies had not been found.

Photos below of the I-88 incident: 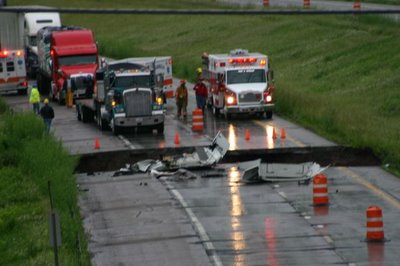 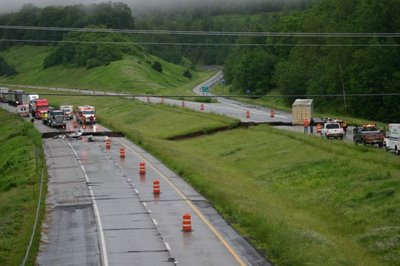 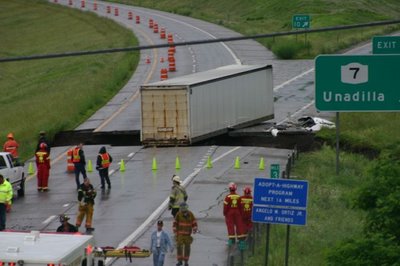 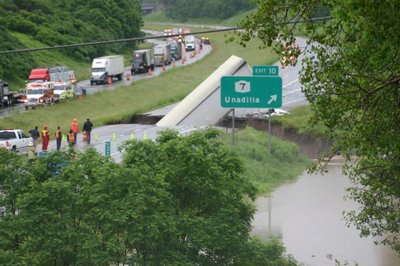 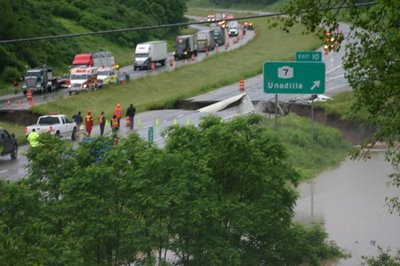 All photos were taken by the New York State Police.

I-90 Westbound was backed up solid from Exit 25A to Exit 25. Traffic is being funneled down to one lane at Exit 25A. DOT and State Troopers are stationed at the merge and are only allowing "local" traffic beyond Exit 25A. At the Exit 25A toll booth, cones block access to the I-90 West onramp and DOT and State Police are also present to allow only "local" traffic through.

I did not take my camera to work with me today, I will tomorrow and will take photos if the closings are still in effect.

Anonymous said…
I remember this. I drove through 2 feet of water in my 1987 dodge aries and after i had to remove the moldy carpet.. fun times.
2:07 PM

Unknown said…
My grandfather died this day he was one of the truckers he was found on July 8th 2006
4:02 AM