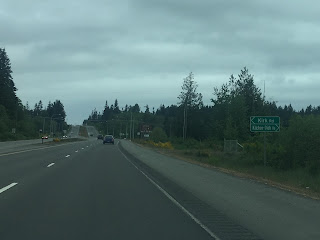 I first spotted Kitchen Dick Road while visiting Olympic National Park in 2015.  I vaguely recalled it being present in 2018 when I noticed it on my GPS.  Apparently the junction of Kitchen Dick Road and Woodcock Road is popular not only for photos but for theft as well.  A Kitchen Dick Road sign appeared on eBay earlier this year but had a high sale price nearing $200 dollars.

On this 1940 map there is a plot of land owned by a "W. Dick" on what is now Kitchen Dick Road.  Incidentally there is also a land owner by the name of "Sam Woodcock" along what is now Woodcock Road.

Unknown said…
Hi! The road was actually named for the two families that lived on opposite ends of the road. Hello from the dick half of the name :)
6:33 PM

AHURA-MAZDA said…
That fits with what I heard from the Kitchen family. When I was in FFA I use to buy my Steers from them. Though she did say it was originally Kitchen but to honor both families Dick was added.
5:26 AM