By Bob Malme November 09, 2009
So I wouldn't stew over Duke's loss to UNC, or the lastest Canes loss, and with the forecast for sunny skies and a high of 74, I decided Sunday morning would be a good time to check out I-74 construction progress from High Point to Randleman, plus some extra points of interest.

Construction Progress since early October-
My first stop was Baker Road. It appears the underlying structure for the bridge is complete and all that is needed is for cement to be poured: 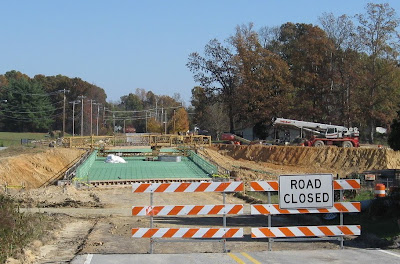 After the bridge is completed, the existing road will have to be widened and tied to the bridge, but that should not take long to do. Another sign of progress is the excavating of the freeway: 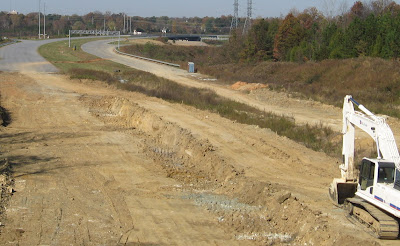 Further toward Baker Road, so that the existing temporary road can quickly be demolished once the bridge is completed. Another sign of progress can be seen in the distance, the first overhead sign gantry to be put up, this for the Business 85 exit (My y I-74 page will have a better photo).

Jackson Lake Bridge-
There's more work to be done here. While the eastbound lanes look almost ready, there remains much to be excavated along the westbound lanes: 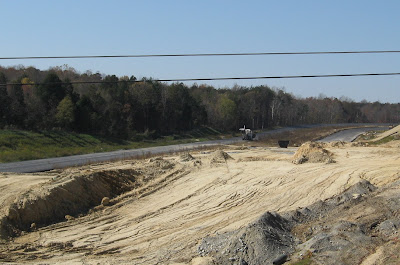 There is still some utility work going on in this area and completion of the grading of the road may have to wait to be completed. There's much more progress seen when looking the other direction toward Kersey Valley Road: 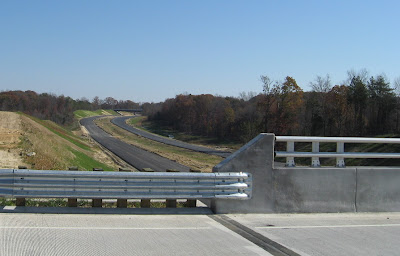 The nearly completed roadbed continues up past the Kersey Valley Road bridge, where again, there still remains work to be done: 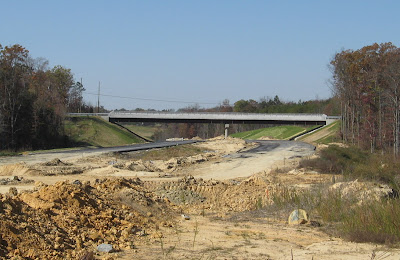 As you see, there's much excavation still needed to be done, but most has been deposited along a slope next to the eastbound lanes, which is now being seeded: 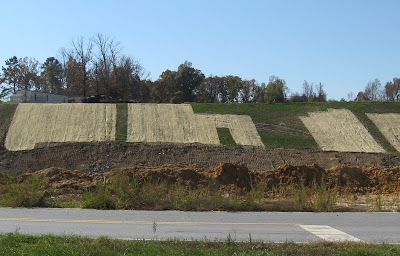 They are, however, starting to grade the rest of the roadbed from before the I-85 interchange back toward the bridge: 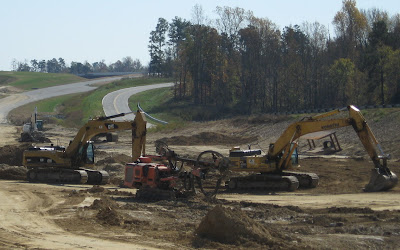 This is a view of the I-85 interchange bridges from the cut-off end of Dresden Road: 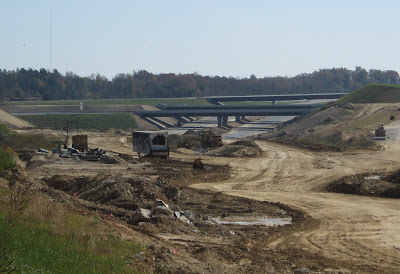 Most of the work on the flyover ramp from I-74 East to I-85 North is complete, you'll notice there's not much change from earlier images: 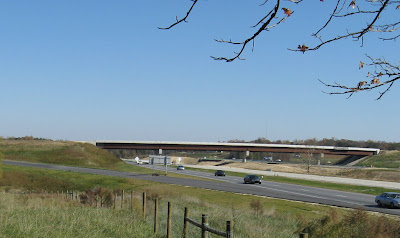 Progress, however, can be seen just south of the bridge where the pieces of support structures for overhead signs has been placed on the original northbound I-85 lanes now being detoured: 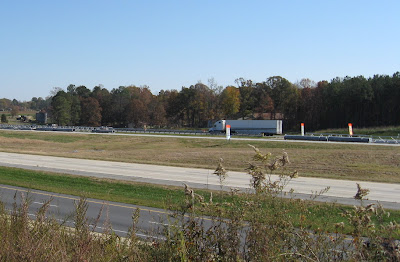 As for the flyover itself, there's still some work to do, with connection to the roadway and the construction of walls still needed to be finished: 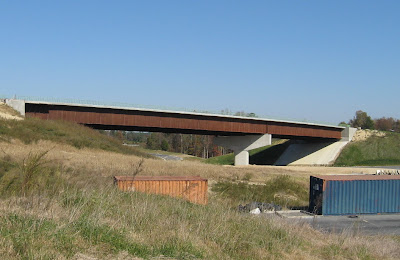 The metal containers are on the future I-85 on-ramp to I-74 East. There are some signs of near completion not much further down the road, with gurdrail being installed. Such as can be seen in this photo from the Tuttle Road Bridge, also notice the grass medians: 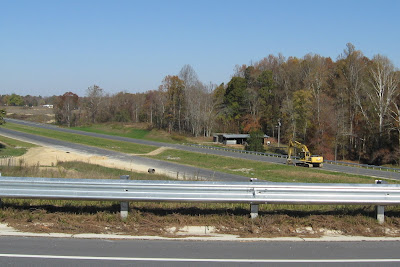 Also close to completion is the Cedar Square Road bridge and new connection to US 311. The view going west on Cedar Square shows only minor work is needed to tie the existing road in to the new one: 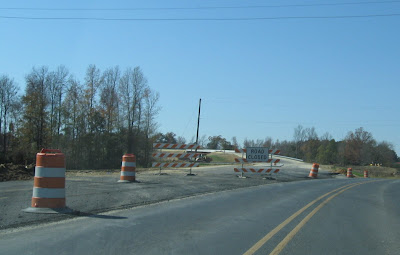 On the opposite side the connection to the bridge is complete and traffic signals have been installed and turned on in yellow flashing mode: 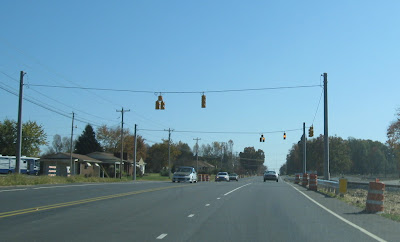 The remainder of work needed here is to remove the existing Cedar Square roadway and excavate and grade the future freeway road surface once the new bridge is open: 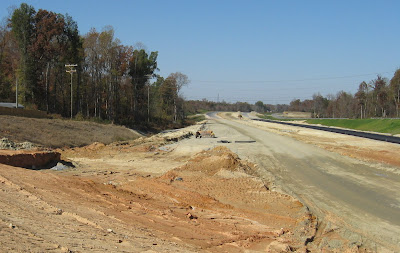 Notice the recent layer of asphalt on the westbound lanes next to Poole Road. The left hand side is the beginning of the exit ramp, which can't be completed until the existing road is gone.

They are also making quick progress along US 220 on the next segment of construction, including the first piers for the flyover ramps: 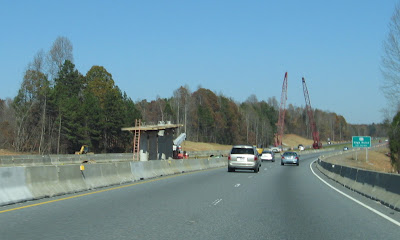 And further clearing of the land for the interchange and I-74 freeway heading west: 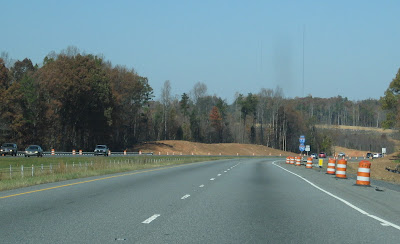 I drove further south to see the progress of the new rest areas built on I-73/74 in Seagrove. According to the last Board of Transportation meeting minutes. These rest areas are suppose to open on January 2. There seems to be more progress on the northbound rest area than the south. Going south you are still restricted to one lane. The rest area building is behind trees up a hill, so I could not get a photo. But here's the view approaching the southbound off-ramp: 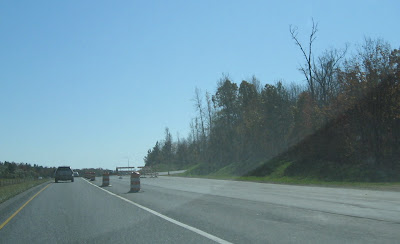 Sorry for the sun glare. The northbound rest area looks almost ready. All lanes are open going by northbound, here ia view with the rest area in the distance: 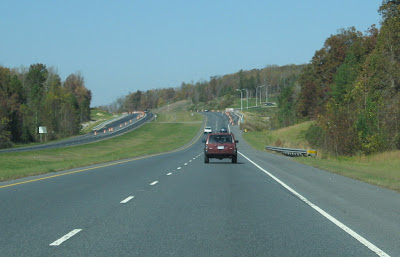 Here's the best image I could get of the building: 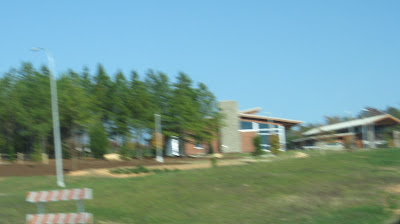 This building is closer to the highway. I should get better photos when it's open and I'm not going by at 70 mph.

Part of the reason for taking the trip was that I had heard from several contacts that work had been nearly completed in several areas, and maybe the route could open before the end of the year. From my observations and the photos there was some confirmation that parts are near completion, but as you saw, there is still much work needed in other places. Thus my optimistic guess is, if the winter is fairly dry, that the I-74 freeway from Business 85 to Cedar Square Road could open by late spring. Which means another visit to observe progress in December or January.

Anonymous said…
boy, they are surely building the flyover ramps quicker at the I-73 and I-74 interchange.. (it was nothing when i last went through 2 months ago).