The Laurinburg-Maxton Bypass, The Once and Future I-74

By Bob Malme November 15, 2009
I went down to Laurinburg today (11/15) to check out the news I heard earlier in the week. First, for those not subscribed to SERoads, a recap. I sent an e-mail to a reporter for the Laurinburg Exchange in response to a quote by the city's mayor in an article of his about the appointment of a new member for their NCDOT district on the NC Board of Transportation. The mayor said one of the new members priorities should be making US 74, I-74. My question was why was the mayor making this comment when the Laurinburg and Maxton Bypasses have been signed I-74 since the fall of 2007? His response was that NCDOT took down all the I-74 shields along the route in Maxton and Laurinburg a few months ago because the freeways were not up to interstate standards. I too a quick roadtrip down to confirm this and take some updated photos for my website.

Did NCDOT take down all references to I-74 in Laurinburg and Maxton? Most of them, but not all. First of all they did not do anything to the overhead or exit signs, at least for now: 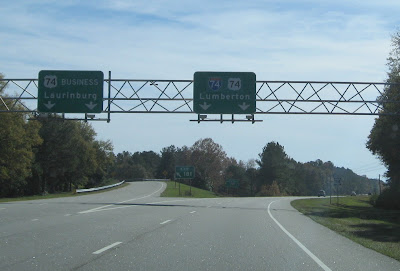 However, all signs on poles along the highway have been removed: 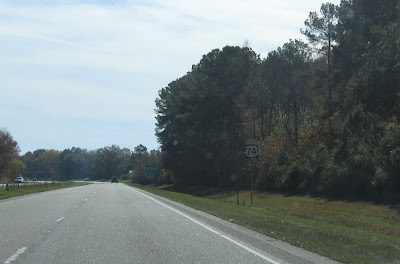 The poles remain, either for the return of the I-74 shields, or possibly the old Future I-74 signs that once were here. The I-74 mileposts and exit numbers, though, have not changed: 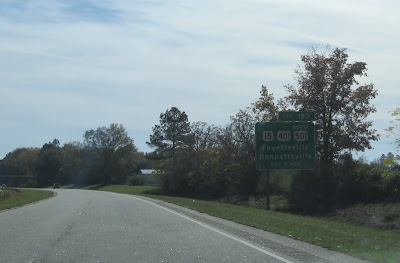 While all the I-74 signs have disappeared from the highway, there appears to be a discrepancy at on-ramps between Scotland and Robeson counties. In Scotland County, all I-74 signs are gone: 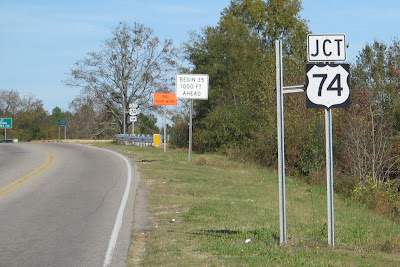 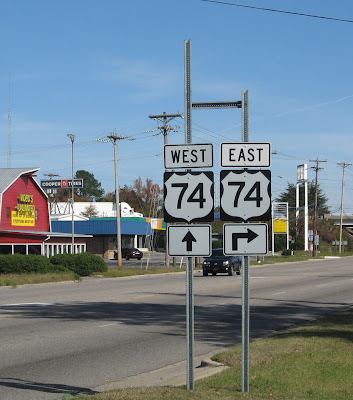 Here, one wonders why the US 74 signs weren't moved up, unless they do not want to move them down again in a short period of time. The reporter said any upgrade of the Laurinburg Bypass is at least 10 years away. It is different in Robeson County though, the I-74 shields remain at the onramps, both at NC 71 and here at the US 74 Alternate/US 74 Business interchange. This is where the real I-74 East now begins: 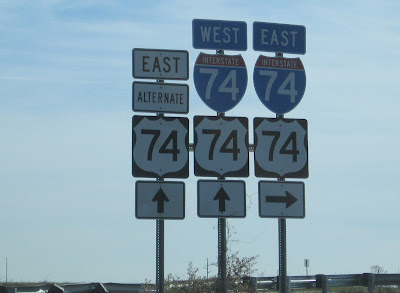 Once back on the new section, one is officially now on I-74/US 74 East: Commentary: One simple question to a reporter thus brings up more questions. The I-73/74 legislation allows states to sign routes designated by the law as interstates once the FHWA certifies the routes are up to interstate standards (or allows exceptions). Did the FHWA allow the signs to be put up in Maxton and Laurinburg in the first place, then change their mind? Did NCDOT provide the complete plans to the FHWA for approval? The plans for the new I-74 freeway from Maxton to NC 41 included sign plans for placing I-74 shields on the bypasses, did someone at the FHWA miss this or did NCDOT not include it? Did NCDOT do this without consulting the FHWA in the first place? Why are parts of US 220 that are substandard allowed to be signed as interstates and this part of US 74 not? The reporter said I could follow up with him if I have any questions, I think I may have. Meanwhile it might be ten years or longer before I-74 signs once again appear in Laurinburg and Maxton. I will revise my I-74 pages to match the current reality.

Alex said…
That is pure sillyness, especially considering that the US 220 stretch currently signed as I-73/74 includes grass shoulders, but the Ellerbe bypass, which has full shoulders, is signed as Future I-73/74...
10:57 AM

Da-ud said…
Now if we could just get these FHWA eagle eyes up to things like I-78 between Allentown, PA and I-81 and strip down those signs! And to make that I-180 go away in WY. And even remove I-40 between Asheville, NC and I-81. Clearly that's not up to standards either, it's raining rocks!
1:08 AM

J-Dawg's Realm said…
Whats funny about this, especially as a truck driver, is that as soon as you enter NC from VA on I-77, it all the sudden becomes I-77/I-74...and then I-74 branches off at Brintle's in Mt Airy...and then once you are on I-74 you get halfway to W-S and the I-74 designations disappear again! Either make it an interstate and bring it up to interstate standards, or dont. You cant have it both ways :)

Last I heard on the rock slide in "The Gorge" was that it would not be re-opened until at least mid January since they have to blast from the top and do more cleanup and that takes a long time.
11:35 PM