What is/was the Boone Trail Highway

By Adam November 14, 2009
A few weeks ago, I came across this interesting marker in Hillsborough. 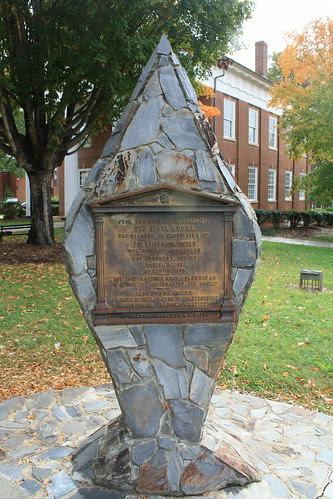 It notes the starting point of an expedition that included Daniel Boone. But there was more on the back.... 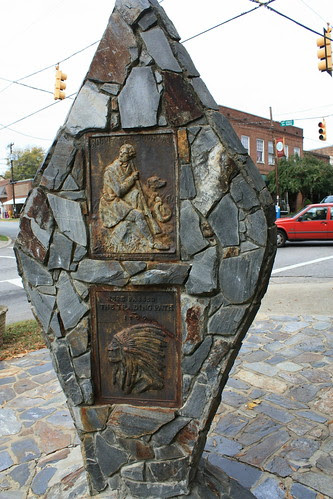 ...an iron cast marker for the Boone Trail Highway. That's where the fun begins. One of the things I enjoy most about my hobby is discovering something I wasn't aware of and being able to learn the history behind it. I always have considered the hobby a research project without a due date.

So of course, curiosity rules the day and I did some quick research and found out a lot about the highway. First, the markers date back to the era of Auto Trails - when regional and cross-country highways went by names not by numbers. And most trails were marked by color schemes.

The Boone Trail Highway is a product of Joseph Hampton Rich - from Mocksville, NC - who wanted to keep the memory of Daniel Boone's travels in the automobile age. From 1913 to 1938, he successfully erected 358 metal tablets from Virginia Beach to San Francisco.

Rich tied the promotion of the route with the need for good roads in many parts of the country. The Boone Trail Association promoted the highway through a newsletter. Unlike a similar route from the auto-route era, the Daniel Boone Trail that ran from Minnesota to the Gulf Coast, it doesn't appear that there was a definite route to the Boone Trail Highway.

From preliminary research of the highway, from Virginia westward to Kentucky the highway zig-zags wildly. In North Carolina, there are markers in Boonville, Hillsborough, Chapel Hill, Winston-Salem, Wilkesboro, Blowing Rock, and through Watuga County. In Virginia, Abingdon, Hillsville, and Wytheville. The markers were also placed in Johnson City, TN and Berea, KY. Markers were also placed and still can be found in Massachusetts.

The markers themselves have an interesting story - most of the cast iron came from the battleship USS Maine. Some are still in their original location -others preserved and moved elsewhere within the town. Sadly, some have been sold at auction.

Have you photographed any remnants of the Boone Trail Highway or any of the markers? I'd love to know.

Unknown said…
J. Hampton Rich was establishing a MEMORIAL highway (along existing routes) rather than marking any historic travels of Daniel Boone. This memorial highway generally ran east to west, coast to coast. Mr. Rich placed his markers on "cross links" or intersecting routes that accounts for many tablets off the main east-west highway. He was promoting better roads in an era when heritage tourism was just beginning. The book, "Rich Man: Daniel Boone" is available only from the author at boonehwy1913@gmail.com.
10:35 PM

Unknown said…
I have a photograph of one that is near our house it is on Lexington Road in Louisville Kentucky on the side of the road near the Louisville Baptist seminary. Give me an email address and I will send you a photograph.
1:54 PM