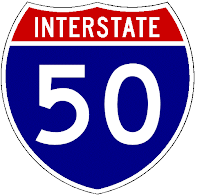 Could these be the next two Interstates in North Carolina?

It seems more than likely that NCDOT is going to petition AASHTO to approve the formal numeric numeration for the two new interstate corridors that were included in the FAST ACT.   The two corridors are US 64 from Raleigh to Williamston then continuing north on US 17 to Hampton, VA.  The other follows US 70 from Interstate 40 near Clayton eastwards to Morehead City.

NCDOT is most likely going to submit an application for both routes this April for the AASHTO meeting this coming May.  Here are my predictions for the number of each route.

US 70 Corridor - We know that NCDOT is planning to petition for a number between 40 and 60.  Obviously, 40 is already taken, and there is an Interstate 44 already in place running from St. Louis to Wichita Falls, TX.  42 is possible - however - there are a few of the opinion that since NC 42 intersects with the proposed Interstate this number is out.  Though, this hasn't stopped NC 73 from intersecting with I-73, I think NCDOT will pass on 42 because of NC 42's close proximity.  My guess is Interstate 46.  NC 46 runs near the state line and can be renumbered if the state chooses.  AASHTO and or the FHWA may throw a curveball and suggest a three digit branch of Interstate 40.  If that is the case, and because I am going to hedge by bet here - I'll say that this suggestion with be Interstate 340 because the connection to 40 lies between 140 in Wilmington and 540 in Raleigh.

US 64/US 17 Corridor - This is slightly more difficult.  The local business coalition that pushed for an Interstate designation along this corridor has always branded this as Interstate 44.  However, they concede that Interstate 44 may not be the right number for the route.  There seems to be an overall consensus of opinion for Interstate 50.  Plus, the western end of this corridor - from I-95 in Rocky Mount west to I-440 in Raleigh - already has an Interstate designation, Interstate 495.  So what will NCDOT do? Scratch 495 and have a two digit number for the entire corridor?   Keep 495 and begin the new route at Interstate 95 in Rocky Mount?

My guess - Interstate 50.  Yes, US 50 goes through Virginia but it is nowhere in the vicinity of the Tidewater Region.  If that is of a concern - Interstate 54 would be my next choice.  I also believe that if a two digit Interstate is approved that the allowed signage for the new route will go beyond Interstate 495's current end at I-540 in Knightdale.  They will allow the route to be signed to the US 64 Business Exit in Wendell (Exit 429).

Of course, I'm most likely wrong.  Feel free to make your own predictions in the comments below.

Brian said…
In a state which has no problem with an I-74/US-74 concurrency, I doubt that other route numbers in conflict will be an issue. Personally, I don't see a need for new route numbers of any variety, but that's not the "cool and trendy" way to approach this.
5:14 PM

Brian said…
In a state which has no problem with an I-74/US-74 concurrency, I doubt that other route numbers in conflict will be an issue. Personally, I don't see a need for new route numbers of any variety, but that's not the "cool and trendy" way to approach this.
6:36 PM

Kristin Rollins said…
Living in southeastern Virginia, I don't think Virginia's route numbering matters, because I fail to see where the political will will come from to foot the bill for any portion of this Interstate. Southeastern Virginia has many higher-priority projects for which funding has not yet been found, especially regarding a number of urban bridge and tunnel crossings. While I love the route (and the US 17/US 64 route is our favored route to get to I-95 southbound from Hampton Roads), I do not see the value of upgrading the portion north of the VA/NC state line, and I do not see circumstances where it is likely to become valuable enough to be worth the cost to taxpayers and governments here.
4:22 PM