By Bob Malme January 01, 2016
While the year was fairly quiet for both I-73 and I-74 in North Carolina, with only continued construction and no new segment openings, there were some positive signs that funding had been found to accelerate several projects over the next several years.

Work continued on the I-73 projects in the Greensboro area. The US 220 widening from the Haw River had both good news and bad news. The good news was the project surpassed the 50% completion mark during 2015, with the percentage finished reaching 56.5% at the end of the year. The bad news was that the project was supposed to be 92% complete. Therefore, NCDOT finally faced the facts of the delay in the work and pushed back the completion date from the end of 2016 to June 2017. The additional work on revamping the NC 68 interchange at the northern end of the project should be completed around the same time. Here's a couple photos from last January showing progress approaching the of the future interchange with US 158  and NC 65, courtesy of AARoads Forum member, Strider: 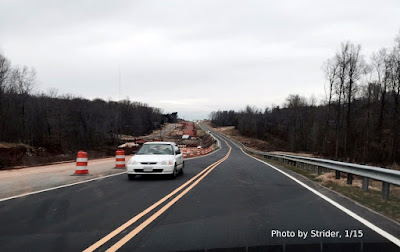 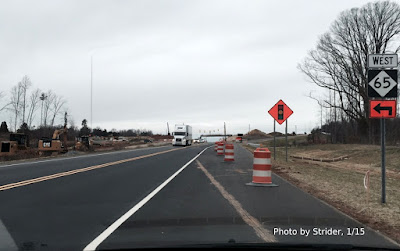 Work is also proceeding on building the I-73 Connector from PTI Airport to US 220 at the Haw River. That project is 45.4% complete and slightly ahead of schedule. The official completion date, however, was pushed back from April to October 2017. Work also started in September on the upgrade of the Bryan Blvd. interchange with the Greensboro Loop (I-840). That project was 22.9% complete at the end of November and should be completed by March 2017. Here's a couple photos taken by Strider this past August of the construction of I-73 along NC 68: 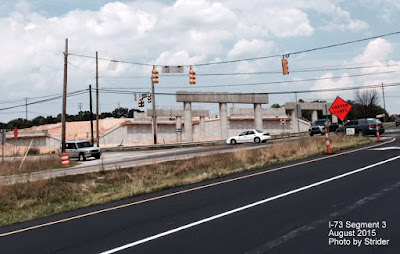 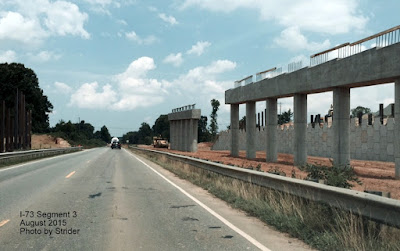 While here's a view of the I-73 roadbed heading east toward US 220: 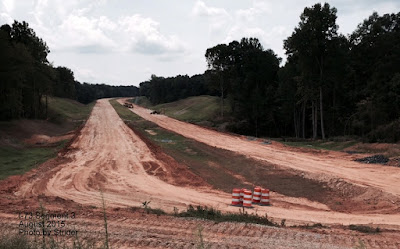 Meanwhile, at the other end of I-73, work is continuing on the first segment of the I-73/I-74 Rockingham Bypass. The work to bring US 220 up to interstate standards south of Ellerbe is now 33.6% complete as of December 22. The project, however is supposed to be 47% complete, and the delay has pushed back the projected completion date to March 2018 from October 2017. There may be some good news about funding the remainder of the project. A source who visited with an NCDOT project engineer said NCDOT may fund the work next year. It is unclear whether this is due to a new budget formula that is accelerating some I-74 projects (see below) or that the project will be funded in next years Draft STIP document which will cover 2018 to 2027.

Work continued in 2015 on building the Eastern half of the Winston-Salem Northern Beltway, which started in the fall of 2014. Work constructing the route from Business 40/US 421/NC 150 to US 158 was 14.5% complete as of December 22. A bad sign, however, is that this is already behind schedule, projected to be 18.6% complete and the projected completion date has already been pushed back to April 2019 from October 2018. Here's a couple photos of the construction as seen from Business 40, courtesy of J. Austin Carter: 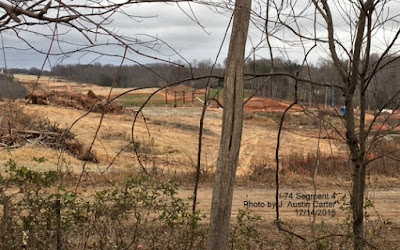 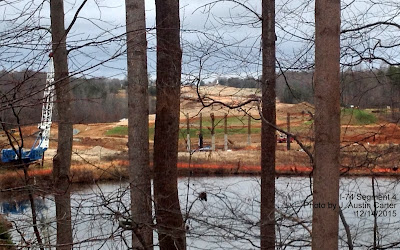 NC Governor McCrory announced in November 2015 that the NCDOT budget formula had been changed, preventing the legislature from taking money from the transportation fund for other projects. As part of the announcement, the governor indicated money had been found to accelerate several high profile road projects, including the Winston-Salem Beltway. If approved by the NCDOT Board in January, funding would granted to the remaining segments of the Beltway, currently unfunded west of US 311 and not projected to start construction until after 2025. It is unclear at this time, however, when construction would now start on these now funded segments.

The budget changes also led the NCDOT to fund several other transportation projects in the 2016-2025 STIP, previously not projected to start until 2026 or later. Among these was the project to upgrade US 74 to interstate standards from the eastern end of the Rockingham Bypass to the currently signed section of I-74 east of the Bus. 74/Alt. 74 interchange in Robeson County (which would included the once I-74 signed Laurinburg Bypass). If approved by the Board, work would start in 2022. It is perhaps that given that the completion of this segment would mean the I-73/I-74 Bypass segment would be the missing link in a completed I-74 between Winston-Salem and Laurinburg, that NCDOT is to fund that work next year.

2016 is supposed to be another slow year with continued construction of the projects listed above, but perhaps, like this year, there will be some surprises along the way.

Bob Malme said…
Forgot to mention, to keep up with the latest I-73/I-74 news feel free to visit my website: http://www.gribblenation.net/i7374nc/index.html
11:10 AM