By Bob Malme November 28, 2013
I took advantage of the very light Thanksgiving morning traffic into and around Boston to do some more 'research' into the new route signage that has been showing up around the city which MassDOT says is the work of an 'unknown organization.' My 1 1/2 hour trip took me up MA 3 to I-93 North to the Mass Ave exit, all at or above (slightly, of course) the legal speed limit. Here's signage for traffic heading from Mass Ave toward I-93 North and the Mass Pike: 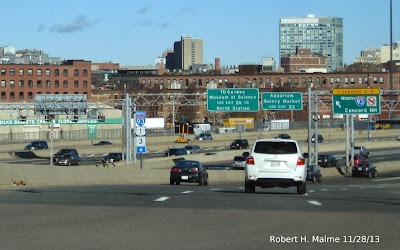 I was most interested in the 3 sign stack for North I-93/US 1/MA 3 because this will be similar, according to the plans, to the route marker signage, with the exception of the arrow, that is to appear along the SE Expressway at the conclusion of the current sign replacement project (assuming it is ever complete). I took a left toward Mass Ave and some interesting route signs appeared: 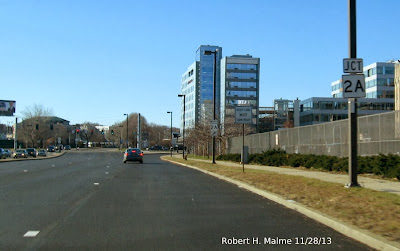 Here are more mysterious MA 2A signs. Based on the signage it would appear the I-93 on-ramp and Melnea Cass Blvd intersection is where 'North 2A' Begins. Let's see whats wrong with that. First this would be the eastern terminus of 2A, since 2A runs east/west, and second this would mean 2A ran this far east along Mass Ave and there's no evidence it has been officially extended from the Comm Ave/Mass Ave intersection. At least they are closer compass wise in correct direction, since shields farther to the west are 180 degrees off (see below). Here's the first reassurance marker after you turn right on Mass Ave.: 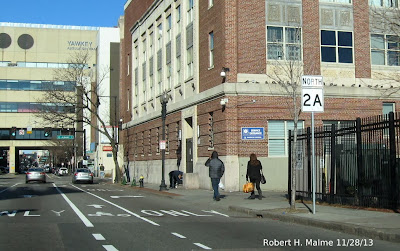 Again, North MA 2A, the Boston Medical Center crosses over Mass Ave in the distance. The next erroneous MA 2A sign I spotted was on an intersecting street two blocks north: 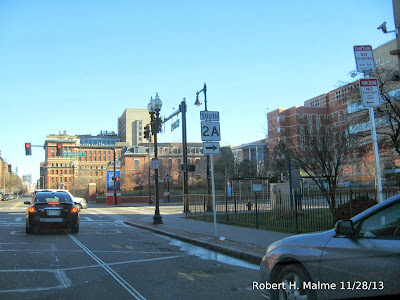 At least they're consistently wrong, the arrow points back toward Melnea Cass Blvd. There was, however, no corresponding north sign, nor were there any more MA 2A signs heading further up Mass Ave until approaching Tremont St. These were the same signs I spotted earlier in the summer with reversed directional banners, such as this 'East MA 2A' on Mass Ave heading west by the Christian Science Plaza: 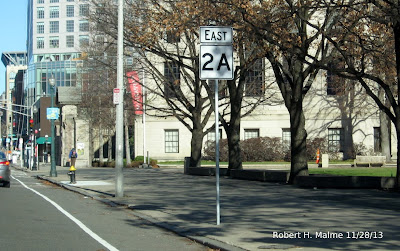 One new thing I spotted this time, that I had not noticed earlier, is that MA 2A is not the only route with misdirected banners along Mass Ave. Here's signage approaching Columbus Ave, though it's somewhat hard to see, the second sign is for West MA 28: 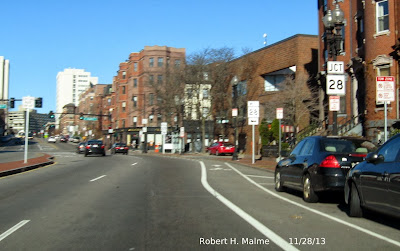 Not that everything along Mass Ave is wrong, here's a trailblazer for East MA 9 at the intersection of Mass Ave.and Huntington Ave.: 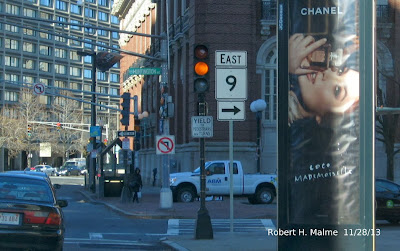 This photo apparently brought to you by Chanel. And here is a view of correct signage from the bridge over the Mass Pike next to the Hynes Convention Center MBTA station... 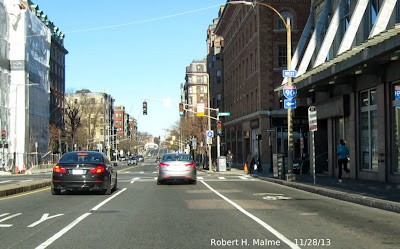 Signs for MA 2 and the Commonwealth Ave intersection is in the distance. Not that you need worry that there are no more problem signs heading further down Mass Ave., here's the 'East 2A' reassurance marker standing at the official start of 2A beyond Comm. Ave.: 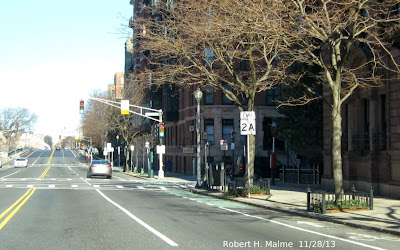 I took a left on Beacon Street before crossing the river at the somewhat erroneous MA 2 West Trailblazer (a To would make it somewhat correct) and headed toward Kenmore Square. Here's some new signage for I-90 and MA 28 at the intersection with Charlesgate East and the Bowker Overpass: 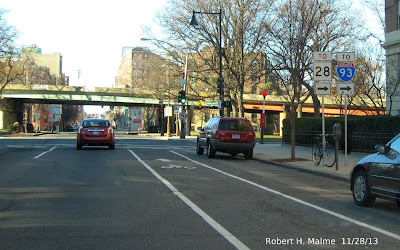 There's also, harder to make out, a To I-90 sign after the green light in the distance. Heading into Kenmore Square there has been some additional route signs added. Such as this trailblazer for West Route 2: 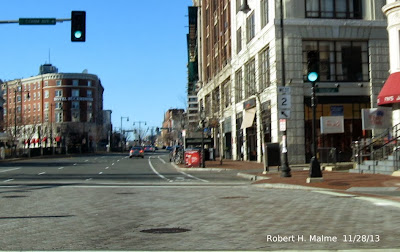 Where Beacon St and Comm Ave cross paths. A block further there's a sign for US 20 West: 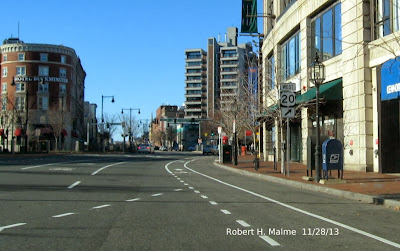 Very straightforward (or should that be right turning?) signage, as is this shield where Beacon and Comm Ave split: 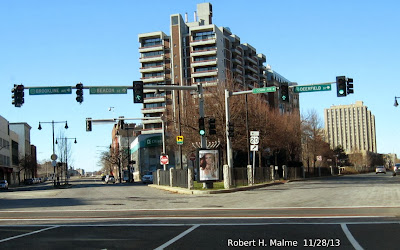 This marks the true beginning of this transcontinental route. (If it was up to me, however, I would have US 20 continue east to Mass Ave then south along the route currently marked as MA 2A to the I-93 interchange, I think US routes should only end at other US routes or interstates, but I digress.) Things get a little more complicated further west of Kenmore Square: 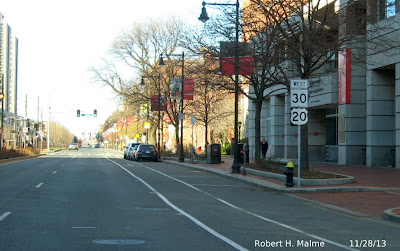 Another erroneous route marker? MA 30 supposedly ends where Comm Ave intersects US 20 in Allston. a couple miles up the road. Again no further official notice of its extension this far east. Also, if it has, it should go under the US 20 shield. The next shield is an older stand-alone US 20 marker, which was for a few years the first West US 20 sign on Comm Ave.: 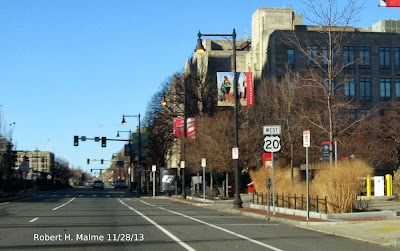 Notice the lack of a large W on the directional banner implying its been around for a few years. Another newer sign installation appears a few blocks further on: 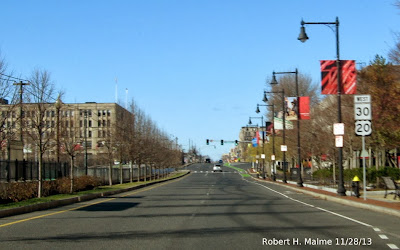 This one is a couple block east of the BU bridge where you see many types of signs: 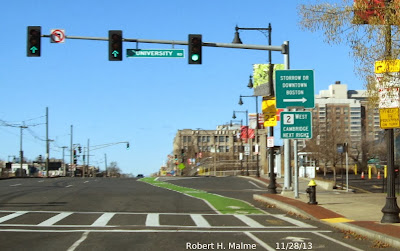 Of particular interest is the green guide of 'paddle' sign for Storrow Drive and MA 2 West, notice the lack of any signage for US 20 (or MA 30). There's a MA 2 West trailblazer in the distance, here it is close up: 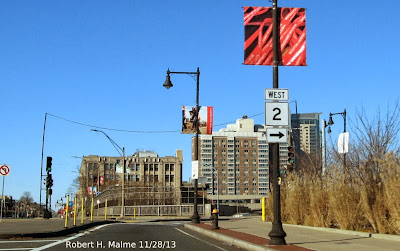 This and the following MA 2 West sign along the BU Bridge offer a clue as to who is installing these new signs: 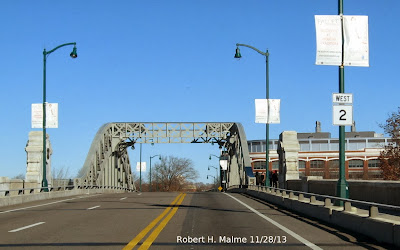 Given that these are two different jurisdictions for the state, the Department of Conservation and Recreation, not MassDOT is responsible for maintaining the bridge, but not the surrounding streets, and signage was put up in both places around the same time, and there is no similar signage on the Cambridge side of the river, implies that it's the City of Boston who is in the sign placement business, though they have denied it according to MassDOT. Regardless, it should be the responsibility of someone to fix wrong or misplaced signage, and that should fall on MassDOT, if no one steps forward.

I drove back Memorial Drive to confirm that no new route signage had appeared along this route recently. But first, I took some scenic photos like this: 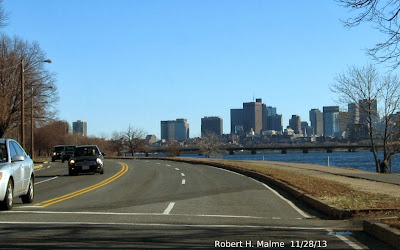 One of my favorite Boston skyline views. But back to signage, or lack of it in Cambridge. There are currently no route markers for US 3 nor MA 3 heading east from the BU Bridge until after Mass Ave (Real MA 2A). Then the first route sign you see is on a detour sign: 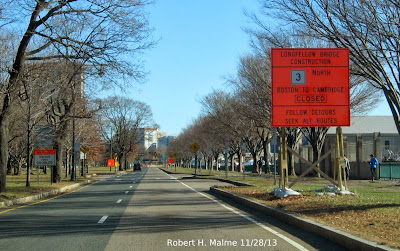 This is for the Longfellow Bridge project which has closed the bridge for traffic heading to Boston. There is only one official MA 3 South reassurance marker just ahead prior to the bridge: 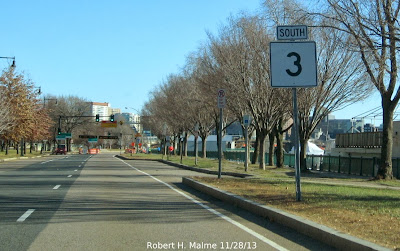 And, ironically, its on the right side just prior to where MA 3 would officially leave Memorial Drive to the left, the ramp currently closed, so if you see the sign you are typically in the wrong lane to continue on it. There were a couple more detour signs further east on Land Boulevard, like this one: 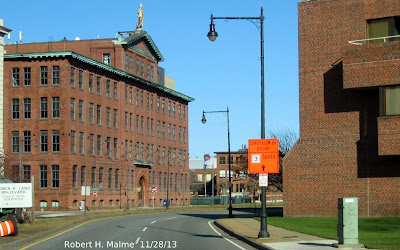 Detour traffic then takes a right at the intersection with MA 28 or the O'Brien Highway: 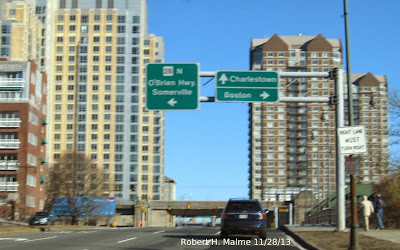 I took this photo not because the signs are new, but rather the skyline. Until a few years ago this was largely an abandoned industrial area on the other side of MA 28, now several buildings have been put up with several more still to be built.

It was nice approaching Leverett Circle without a traffic jam, here's the Big Dig related signage put in several years ago: 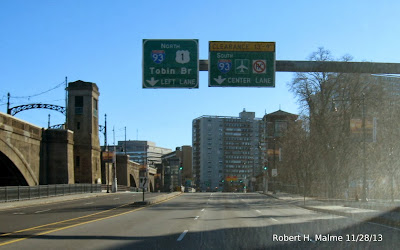 I apologize for the glare. If you want to get on Storrow Drive West you should be in the right lane, though there's no sign to indicate that until you get to the Circle itself. Here's the overhead signs for I-93 and North US 1, and additional ground level signage for South US 1 and MA 3 (a rarity for Big Dig on-ramps): 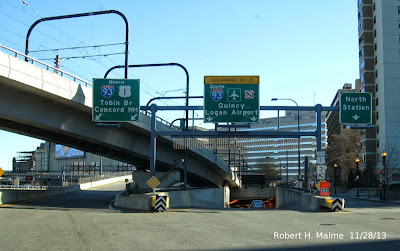 That's it for Boston (and Cambridge) signage, I conclude with some I-93 South related photos. First here are the newer overheads that went in with the Big Dig in the South Bay area. The new sign project is to replace the UMass and JFK Library text on the Exit 15 sign with Dorchester and South Boston-- 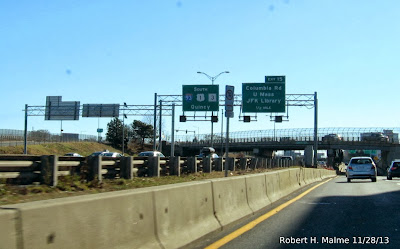 Apparently specific sites are no longer allowed on overhead signs according to the new MUTCD. There are also these two relatively new I-93 shields that have appeared on the Southeast Expressway (but don't seem to be related to the sign replacement project, since they don't match plan specs): 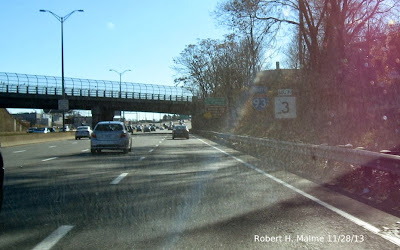 Again, sorry for the glare, this one has a South banner, while the one placed beyond Exit 11, Granite Avenue, is 'topless': 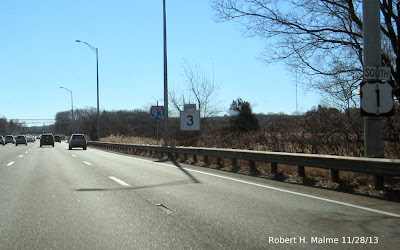 Hopefully, the contractors responsible for sign replacement along this stretch will speed up there work, especially with the deadline for completion coming up next April. If and when they do start placing new signs along I-93, I will post photos and updates both here, in the AARoads Forum and on the appropriate Facebook groups.

Black Sheep said…
"Apparently specific sites are no longer allowed on overhead signs according to the new MUTCD." Rulemaking geniuses that they are.

Then what becomes of the first photo in the set with a rich set of popular sites: "TD Garden", "Museum of Science", "Aquarium", "Quincy Market".

And does "Logan Airport" count as a site?

Anonymous said…
They have started installing the signs along 93 North now. Looks like the ones northbound in Braintree approaching Exit 6 (Rte 37) are up, and there's another new one overhead in the left lane of 93 Southbound saying for Brockton/New Bedford follow 24 South. I also saw them last night installing one 93 south at the Braintree Split, presumably for exit 6.
11:53 AM

Bob Malme said…
As to Black Sheep's comment, the restriction on specific sites only applies to the main exit signs. Additional, or auxiliary signage can still contain specific site names, these are typically ground-mounted signs, but can be put on overhead structures, as on I-93 North beyond the Pike exit.
6:33 PM

Bob Malme said…
An update on the wrong route signs in the post. The local Fox station did an 'undercover' report 'exposing' the wrong signs on February 26. The story implied that Boston transportation officials were unaware as to the problem signs until informed by the TV reporter. As I indicate in the post, it appears enough people at BTD knew about it to deny they were responsible back in the fall.