NCDOT Awards Next I-73 Project

NCDOT awarded a $96.2 million contract to Tetra Tech Construction Inc. of Mayfield, N.Y. to widen U.S. 220 from Horsepen Creek Road in Guilford County to the intersection of U.S. 220 and N.C. 68 in Rockingham County. The part from the Haw River northward 'will be constructed as a part of future I-73, which is scheduled for availability in April 2014.' This segment of the construction is actually the 3rd part of the contract to build the 'NC 68-US 220 Connector', the rest to be awarded in 2014. The current US 220 will be widened from 2 to 4-lanes with the path of US 220 moved at its southern end to make way for the ramps to the future connector. The current US 220 intersection with NC 68 will be changed so that traffic will not have to take a left turn off the highway to continue on US 220. Instead traffic on South 220 will stay on the mainline and access to NC 68 will be made via (for now) a right hand turn at a signalized intersection. (When or if I-73 is extended north to the VA border this will be made into an interchange).

From my soon to be updated I-73 Segment 2 page, here is a look at one of the future exit signs for the US 158 interchange, from the contract plans: 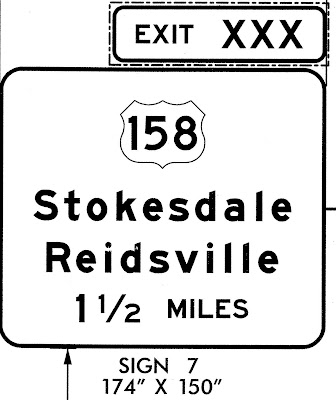 The exit tabs will not be put up until after all of the I-73 contract is complete. For now, you just have to imagine a I-73 shield in the sign below that will direct interstate traffic off of US 220 South and onto the new Connector: 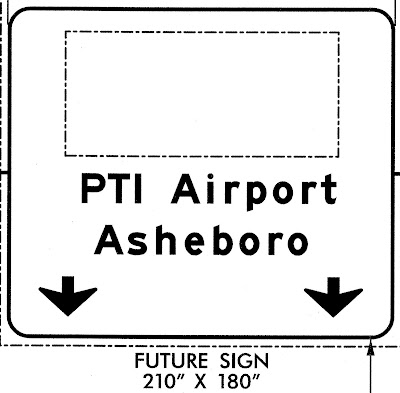 I-73 will not be signed on this section of US 220 or the Connector until at least 2018 when the connection from Bryan Blvd near the airport interchange to NC 68 is tentatively supposed to be completed.