ODOT tags $809 million for possible I-74 extension in Cincinnati

By Adam January 26, 2011
North Carolina may no longer be alone in building/extending I-74 to South Carolina.  The Ohio Department of Transportation recently tagged $809 million for an Interstate 74 extension to the eastern suburbs of Cincinnati.  The $809 million comes from ODOT's 2011-2015 Major New Construction Program List.

I-74 would be extended from its current eastern terminus along I-75 North to the Norwood Lateral (OH 562).  I-74 would follow OH 562 eastwards to I-71 and head North to around Exit 9 (Red Bank Road).  Red Bank Road to US 50 would be upgraded to Interstate standards.  Then a new freeway would be built eastwardly over the Miami River to OH 32 near Bells Lane.  OH 32 would be upgraded (via grade separations) to an Interstate to Old OH 74 east of I-275.  (This would include a redesign of the current OH 32/I-275 Interchange.) 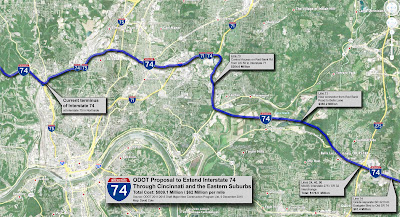 Map of I-74 Cincinnati extension (UrbanCincy.com)
Currently, ODOT is in the process of rebuilding I-75 in the vicinity of the I-74 and Norwood Lateral interchanges.  The Mill Creek Expressway Project, a total rebuild of I-75, consists of eight different major projects and scheduled to be completed in 2020.
The $809 million that ODOT has targeted for the I-74 project is broken down into four sections.  Section 1: $204.6 million to upgrade Red Bank Road to an Interstate from I-71 to US 50.  Section 2: $366.2 million for a new highway from US 50, over the Miami River, to OH 32 near Bells Lane.  Section 3: $178.9 million for upgrades to OH 32 from Bells Lane to I-275 including modifications to the OH 32/I-275 interchange.  Section 4: $61.4 million to upgrade OH 32 to Interstate standards from Eastgate Blvd. to Old Ohio Route 74.
ODOT does not list any planned upgrades to the Norwood Lateral or Interstate 71.  The Norwood Lateral would need a significant overhaul to meet modern Interstate standards.
The jury is out whether or not this extension will ever happen.  But it is an interesting development in the I-73/74 saga.
Story Link: $809M tagged to extend I-74 through Hamilton County ---Cincinnati Business Courier
HT: Frank Brosnan

Froggie said…
It's not ODOT who's tagging this as an I-74 extension. It's local activist groups that are generally opposed to the OH 32/"Eastern Arterial" portion of the project.
7:24 AM

John Bronson said…
Agreed, and in the UrbanCincy blog post, I called out Jake Mecklenburg's far reaching commentary on that. It was nothing more than opinion and guesswork. If anything, all that is programmed in for any future improvements is what Clermont County has been eying for capacity improvements and interchange construction along OH 32.
8:00 AM

concerned taxpayer said…
Of course ODOT isn't saying anything. Their plans are a vague spaghetti-like meshwork to keep homeowners and businesses in the dark about where the highway will run. Newtown is strongly opposed to the highway, now that the Village understands what's being planned. The I-74/73 connector plan is part of the federal highway priority corridors, and it doesn't take much effort to find Southwest Ohio politicians in favor of turning the Eastern Corridor highway into an interstate. Two highways already serve this area, and they're barely a mile apart. Why spent a billion dollars on a road that's not needed??? What happened to the Tea Party when you need them?
5:03 PM

Anonymous said…
Let the construction of I-74 East, through the Greater Cincinnati area begin, starting with renovating the Norwood Lateral, Red Bank Rd. and Ohio 32 into interstate status. Cincinnati needs a major east-west interstate highway going through the area, and it's I-74. I-74 West goes to the Greater Indianapolis area, so constructing I-74 East should go to the Greater Huntington-Ashland area, entering West Virginia through Chesapeake. The Only portions of I-74 East that should be built is the area, splitting off Ohio 32, west of Piketon and turning southeast toward the proposed Portsmouth bypass in Lucasville, where it meets up with I-73, which will be Huntington's main north-south interstate highway. Both I-73 and I-74 will run concurrently along the Ohio River to Chesapeake, then cross into West Virginia, join up with I-64 West, from Huntington's west side to Kenova, then turn southward to Bluefield, before both interstates split into two separate directions. Interstate 73, on the other hand, can be constructed through renovation of U.S. 52, between Huntington and Portsmouth, U.S 23 South, between Portsmouth and Columbus, then route I-73 along the eastern corridor of I-270 and reconnect with U.S. 23 North. Route I-73 with U.S. 23 North, between Columbus and Findlay, where it would join up with I-75, between Findlay and Perrysburg and I-475, between Perrysburg and Sylvania, before joining U.S. 23 North into Michigan. Getting back to I-74, this can become a reality and it should happen. BTW, it'll definitely save motorists, commuters and truckers, alike, a lot of time and mileage, especially when commuting, between Cincinnati and Huntington. The people in West Virginia want this and it will also benefit Ohio, as well, especially in terms of bringing in new business, along I-74 East. At last count, it's majority rule, among the people in Ohio and they want this highway made, as soon as possible. Case and point, the Tea Party can get lost- the people rule and they say, opinion or not, BUILD THE HIGHWAY!!!
6:57 PM