When I trace my early interest in traveling and the hobby of roadgeeking, I always go back to where I grew up. Pittsburgh, Allegheny County, PA 48, and the Orange Belt. I grew up on Route 48 in Elizabeth Township on the Orange Belt. One of my family's favorite stories of me growing up is when I was around three years old - so 1980 - I told one of my aunts, "It's not that hard to get to our house - we live on the Orange Belt!"

The Allegheny County Belt System is one of the many things that are uniquely Pittsburgh. A series of existing roadways - minor and major - developed in post-World War II Allegheny County to navigate the region. Never intended to be a "beltway" in the modern sense - a full freeway encircling a city - the Allegheny County system is more like a wayfinding system connecting you throughout the county.

It is uniquely Pittsburgh - it's been asked about, written about, and videoed.

On a recent visit home, I decided to drive the entire route of the Orange Belt. The road I grew up on. I knew parts of the route (specifically the southeastern and western sections) but had never done the whole thing. During this drive, I found myself enjoying and appreciating this uniquely Pittsburgh highway system; but at the same time, growing increasingly frustrated at the slow speeds and questioning the usefulness of the system today.

The Orange Belt at over 91 miles is the longest of the five routes. It runs in an upside-down U-shape beginning at the intersection of PA 51 and 48 in Elizabeth Township around the outer edges of the county - briefly entering Westmoreland County - before ending at the intersection of Clifton Road and PA 88 in Libary. It's also known as the County Park Belt as it connects many of Allegheny County's major parks.

The rural feel of the Orange Belt is almost immediate as PA 48 rises and falls through some farms. One mile from its start at PA 51, a right turn onto Round Hill Road takes you to the entrance of Round Hill Park and Exhibit Farm. One of the county's nine major parks, Round Hill is also home to a live working farm.

The Orange Belt and PA 48 continue North towards Monroeville. It runs along the western border of White Oak Park. At US 22 and Interstate 376, PA 48 ends, but the Orange Belt continues. In this Northeast corner of the route, the Orange Belt winds through a combination of older suburbs and farmland, along several different roads. Here, the Orange Belt makes many turns onto roads such as Center Road, Saltsburg Road (PA 380), New Texas Road, Leechburg Road, and Logan Ferry Road before briefly entering Westmoreland County and New Kensington.

The Orange Belt crosses back into Allegheny County over the C.L Schmidt Bridge onto old PA 28 before turning left and climbing through the Crawford Run Ravine. Here, after another series of turns onto various local roads, the Orange Belt enters the community of Russellton. Russellton is an example of a small mining company "Patch Town" that are found throughout Western Pennsylvania. 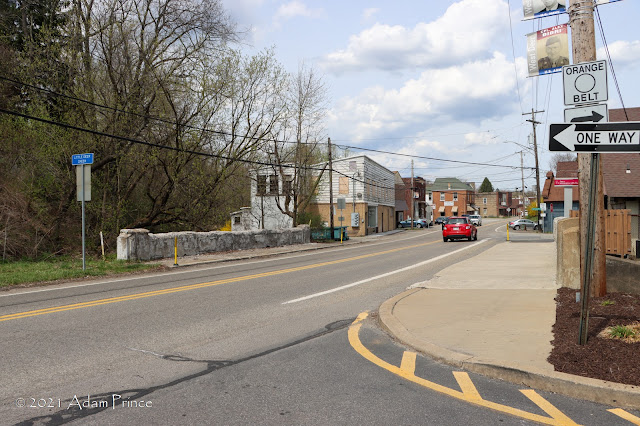 In Rusellton, I stopped at an old concrete bridge of Little Deer Creek - but then found myself missing a turn. For most of the route, the Orange Belt is pretty well signed, but there are spots where signs are either missing or you need to look around the intersection for other signs to know which way to go. 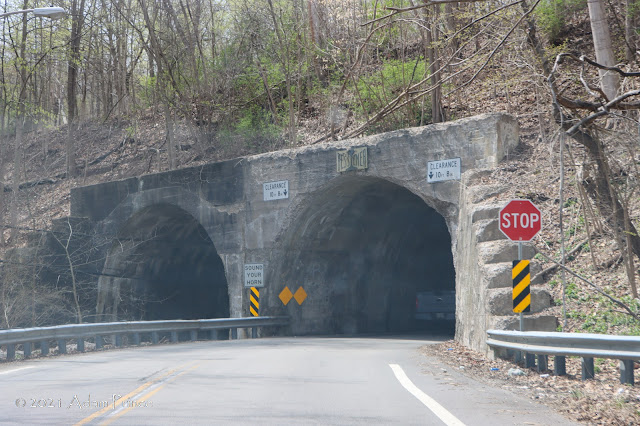 After about two miles, I realized I was off course but not before I came across this unique railroad underpass that forces Little Deer Creek Valley Road through a one-lane tunnel. 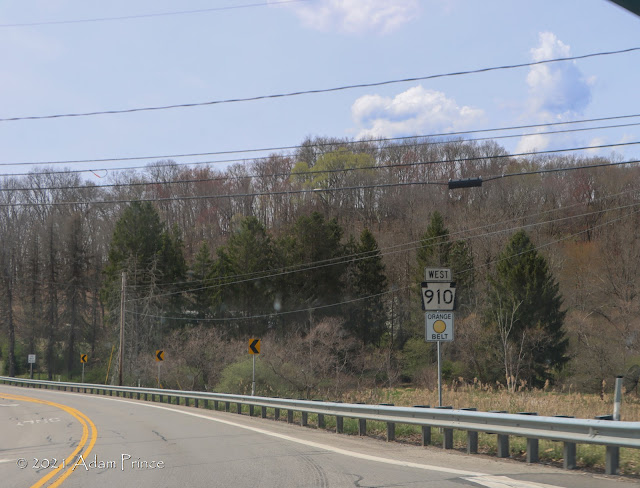 I turned back around and followed the Orange Belt past Deer Lakes County Park, Deer Lakes High School to PA 910. Similar to PA 48, the Orange Belt runs along much of PA 910. Through this section, PA 910 is a mix of rural farms, newer suburbs, and shopping centers.


The Northwest Corner of the Orange Belt was the quietest. The Orange Belt goes through the estates of Sewickley Hills and Sewickley Heights before entering the town of Sewickley. Here much of the winding Blackburn and Fern Hollow Roads are lined by stone walls and gated entrances to many large estates. Sewickley is one of the few towns that the Orange Belt routes through - compared to the rural townships, old patch communities, and suburbs through much of its route.

After crossing the Ohio River via the Sewickley Bridge, the Orange Belt enters its western section by climbing the ridge via University Boulevard. Here the most consistent four-lane portion of the belt begins. University Boulevard goes past the campus of Robert Morris University, my alma mater. The Orange Belt continues towards the former entrance of Greater Pittsburgh International Airport and turns right onto the Airport Parkway. The route jumps from Interstate 376 to US 22/30 at Robinson Town Center and then returns to a two-lane road at the Oakdale/McKee Road exit. While it is a relief to have higher speeds on this section of the Orange Belt, you need to keep your eyes open as signage for following the Orange Belt is either missing or hard to find.

The southwestern corner of the Orange Belt runs through valleys and ridges, hollows, and farmlands to Bridgeville. It was during these final stretches that I began to get frustrated with the drive. Two lanes, winding roads with posted speeds of 30 or 35 miles per hour made driving the route time-consuming. Orange Belt signs would either be faded or turns not marked until the last minute making it difficult to stay on course.

The final southern leg of the Orange Belt connects Bridgeville to Libary through the South Hills suburbs. This section is a mix of homes, recreational facilities, older patch towns, high-end homes, older strip malls, and more. The turn from McMurray Road to Clifton Road wasn't marked, and I briefly went off course. In Library at the terminus at Route 88, the end and the approach to the Orange Belt was not signed. Maybe it was the reconstruction of the intersection, but it seemed like the Orange Belt was again an afterthought here.

The 91.7-mile drive took over three and a half hours. It was long, slow, and at times I felt like I wasn't getting anywhere. Yet, I did. I saw areas of Pittsburgh I had never been to or hadn't seen in years.

The Belt System in Pittsburgh is unique to the city and is part of the fabric of our town. We all have grown up with it - used it to give directions - and more. Yet, I found this route outdated and possibly no longer necessary. Signage, while for the most part good, was beginning to slip from what I recall growing up. Further, many of the Orange dots that are famously part of the Belt System are faded - to where you could say it is the Black Circle Belt. About 10-15 years ago, Allegheny County replaced nearly all of its older signs with newer shields. Interestingly, the four old-style Orange Belt shields I found on this route were as bright and as vivid as I remember.

This drive brought back old memories, gave me new discoveries, yet it frustrated and annoyed me. I found myself questioning the usefulness of this route, including the entire system. The Belt System is more of a Wayfinding guide for Allegheny County, and I wonder if they should emphasize that more.

Regardless, I hope to drive the remaining Belt System routes on future trips home to Pittsburgh.

Bill Simoni said…
I grew up on the Blue Belt myself (in the Carrick neighborhood of Pgh). Pretty much only saw the Orange Belt when we went through the Elizabeth area on our way out to West Newton to visit family.
3:58 PM

Unknown said…
I enjoyed your comments in regards to Old highways where did you come up with the term Road geeking I've been a road geek since 1967 I grew up in Southern California but now I'm a resident of Montana if you want to respond feel free I'd like to discuss many things thank you
11:49 AM

Amelia K said…
I wrote in another article how this belt corresponds to the Disney movie Beauty and the Beast, in which, unfortunately, you are the most like Gaston, the villain. I am sure that you have seen the movie before and know what I am talking about. My favorite character from the movie would have to be Belle because I love Disney princesses. If you have a YouTube channel, you can post your journey on there and I can film the playlist while watching Beauty and the Beast on Disney+.
7:37 PM