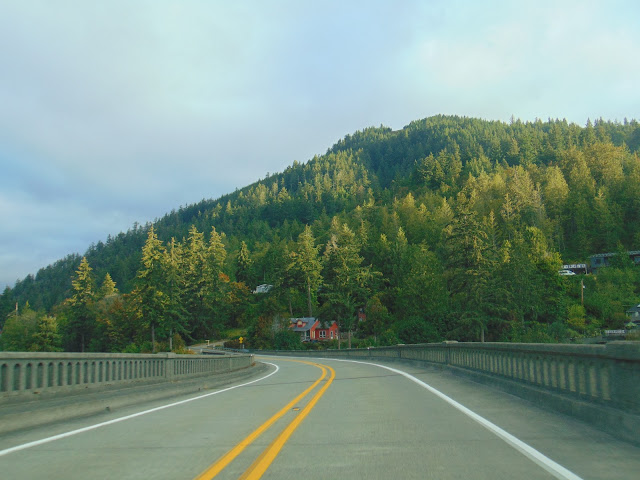 Sometimes referred to as Washington State's Big Sur, Chuckanut Drive (Washington State Route 11 or WA 11) curvy route hugs the sheer sandstone cliffs of the Chuckanut Mountains, offers coastal views and traverses scenic Skagit Valley farmland on the roughly 21 mile long scenic byway between Burlington and the Fairhaven Historic District in Bellingham. Chuckanut Drive happens to be the only place where the Cascades meet the sea, as Chuckanut Drive overlooks Samish Bay and offers gorgeous views of the San Juan Islands and Chuckanut Bay. The Chuckanut Mountains, also known as the Chuckanuts, are a branch off of the Cascades and drop right off to the salt water where Chuckanut Drive clings to the side. Chuckanut is said to be a word for "long beach far from a narrow entrance" or "beach on a bay with a small entrance." This comes from the Nooksack and Lummi languages of the peoples who used Chuckanut Bay as a place for gathering shellfish and catching fish.

Along Chuckanut Drive are plenty of hiking opportunities at Blanchard State Forest and the popular Larrabee State Park, which is Washington State's first state park, as a result of a land donation by Frances Larrabee, Charles Larrabee's widow. In addition, Chuckanut Drive also serves as the only automobile access to Larrabee State Park. There are also shops and restaurants along Chuckanut Drive in towns like Bow and Edison that sell great food and beverage like craft beer, artisan cheeses and fresh oysters, so you may whet your appetite for the local cuisine as well as great scenic driving.

Not only is Chuckanut Drive renowned for its scenic beauty and gastronomical charms, it is also a road of great historical value as well. Portions of WA 11 are eligible for inclusion in the National Register of Historic Places due to its association with early highway construction in Washington State and for its integrity of design, location, workmanship, feeling, and setting. With its setting on the steep mountainside above Samish Bay and Chuckanut Bay, the design of Chuckanut Drive makes it a premier historic scenic highway in the state of Washington.

The completion of this road helped usher a new era of transportation for the region. In addition to providing needed access for farmers and local residents to the city of Bellingham, it also offered a unique opportunity to view some of the most spectacular scenic views anywhere in Washington State. By the time the road opened, the route was becoming known as Chuckanut Drive.

As far back as the 1860s, there had been a road of sorts along parts of modern Chuckanut Drive, but it was more like a trail as opposed to a road through the Skagit County section between Fairhaven and Blanchard. In 1892 the road, at least in Skagit County, had followed a route similar to today's Chuckanut Drive, although calling it a road may be considered generous as people traveling on it near the water were often blocked by high tide and had to wait until it dropped enough to let them pass.

Even before the dawn of the automobile age, in 1895, parts of modern WA 11 were already a part of the state highway system in Washington and the road from Blanchard to Whatcom County became a state maintained roadway. In 1896 a logging access road between Bellingham and Bow was built to replace the original road, but for its first 10 years, it really couldn't be called a road either. In 1896, funding from the State of Washington and Skagit County supported construction of a logging access road along the shoreline between Bellingham and Bow, but below the present highway. It was known as the Old Blanchard Road and served as the first road connecting Whatcom and Skagit counties, as earlier travel was being conducted by boat or horseback. Although only a one lane dirt logging road with deep ruts, this was the first time communities in Whatcom County had been connected by land to the Skagit Valley. In 1901, Skagit County sold a 3 mile section of the road for the Chuckanut Cutoff to the Great Northern Railroad and the road became impassable. This became a great controversy among area residents. Then in 1905, funding was allocated to pave Chuckanut Drive from Bellingham to Bow. However, the funding ran out after only a few miles of road had been paved.

As auto and bicycle touring increased in popularity in the area, local business partners and entrepreneurs Cyrus Gates and Charles X. Larrabee, envisioned a scenic roadway overlooking the Samish and Chuckanut Bays and Strait of Juan de Fuca. They surveyed the land where a road could be built alongside the cliffs. They also helped influence the Washington State Legislature to appropriate $25,000 in 1909 for construction of a road on the flanks of Chuckanut Mountain. At this time, Chuckanut Drive was known as the Waterfront Road.

In 1910, when Washington State built a labor camp at the mouth of Oyster Creek, convicts began building the road on a route suggested by Gates and Larrabee. Slowed by the challenging terrain, the convicts completed only 4,000 feet of roadway from Blanchard to Oyster Creek. The convicts were not skilled at road construction and the road was challenging to build as envisioned. Parts of the roadbed had to be blasted out of the cliffs overlooking the water. Critics of this program had accused the Washington State Highway Department of wasting public money by building less than a mile of the 5.5 miles of roadway intended by the 1909 appropriation. After the experiment to use local prison labor didn't pan out as was hoped, the Washington State Highway Department contracted with Quigg Construction Company in 1913 to build an additional four miles of roadway. That same year, Chuckanut Drive was designated part of the Pacific Highway, a designation that remained until 1931. Failure to prevent debris from falling on the railroad directly below the highway resulted in the railroad suing the state and the contract being rescinded. Washington State Highway Department work forces then finished the remainder of the road.

By 1916, when Chuckanut Drive was finally opened to automobile traffic, approximately $135,000 had been spent to build the roadway. In 1920, the City of Bellingham paved a section of the road approaching its north end to Inspiration Point near the road’s 1,460 foot summit. With federal aid, the state extended the 20-foot-wide, 8-inch-deep concrete pavement three miles south from Inspiration Point at a cost of $35,000 per mile. However, most of the road remained gravel until 1921, when two contracts resulted in paving nearly the entire route. By 1926, all but one mile of Chuckanut Drive between Oyster Creek and Blanchard had been paved in concrete. Other improvements included replacement of wooden bridges with concrete bridges.

When Chuckanut Drive was completed in 1916, the road became part of the Pacific Highway from the Canadian Border near Vancouver, British Columbia to San Diego, California. Initially, the Pacific Highway had used the existing State Road 6 number and due to the restructuring State Road 6 was completely replaced by State Road 1. Chuckanut Drive was designated US 99 in 1926, but then it was changed to US 99 Alternate in 1931 when an inland bypass was designated by Washington State as US 99. That bypass is now part of I-5 and flanks the eastern side of Blanchard State Forest and Larrabee State Park. A statewide highway renumbering changed the route's designation to WA 11 in 1964, but taking effect in 1970.

With enthusiasm typical of the early automobile era, the press and newspapers touted Chuckanut Drive for being the first segment of the Pacific Highway between Canada and San Francisco to parallel the Pacific Ocean (or at least an arm of the Pacific Ocean), a critical link in the local economy connecting the agricultural Skagit Valley with shipping points on the shores of Whatcom County and a scenic wonderland providing an incomparable panorama of Western Washington State. Among the first travelers to appreciate the scenery of Chuckanut Drive were bicycle riders, who lobbied for a smooth surface roadway and helped bring about construction. Chuckanut Drive became a destination of early automobile clubs and tourist buses. During Prohibition, the route was known as the "Liquor Runners’ Road" for its frequent use by rum runners transporting illegal booze from Canada into the United States.

Despite closures for rock fall removal and costly repairs of roadway failure due to landslides, Chuckanut Drive remains one of the most popular scenic highways in the state. Chuckanut Drive typifies a historic highway in Washington State, being a relatively narrow, two lane roadway with little or no shoulders, occasional widening and pulloffs, restricted sight distance, limited or non-existent clear zones; at-grade driveway and rural road crossings; vehicle weight restrictions, commercial truck and bus travel prohibitions and severely reduced speed limits. Chuckanut Drive would today be recognizable to anyone who had read the Seattle Sunday Times newspaper in 1916: "The roadbed is fully twenty feet wide in the narrowest places and where necessary retaining walls of concrete and stone insure the permanency. Heavy wooden guards make the passing of all vehicles absolutely safe". Although the road has been widened slightly in places with additional pullouts and improved traffic barriers, Chuckanut Drive has essentially been unchanged since its construction. However, the highway's precarious location has been retained. Original stone and mortar walls, built more for decoration than safety, have been rebuilt at scenic pullout, with some of the original stone and mortar walls being retained along the roadway over the years.

I had the opportunity to drive and check out Chuckanut Drive going northbound during a visit to Washington State in late August 2020. It was a nice, quiet drive on a weekday morning that had long been on my list of places to check out. I was a bit limited by time, so I did not have much time to check out the hiking opportunities located along the road and the nearby Chuckanut Mountains, but the drive sure is fun. 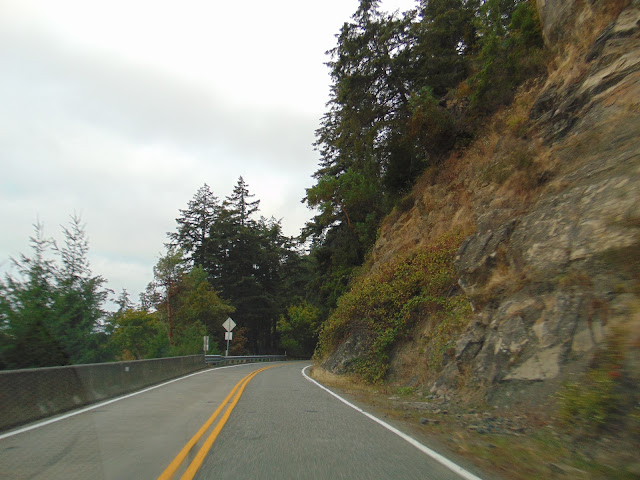 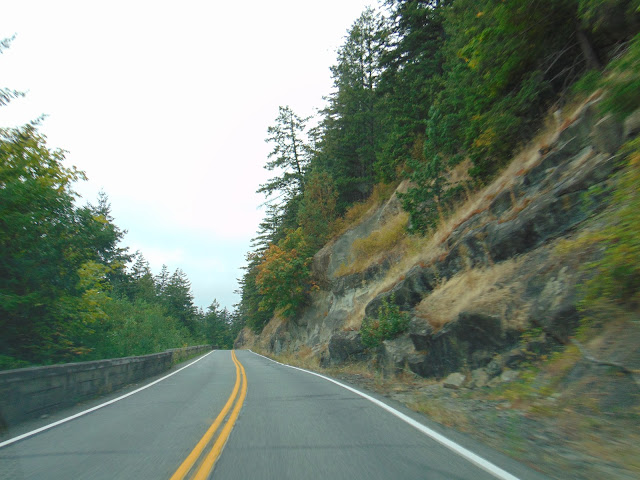 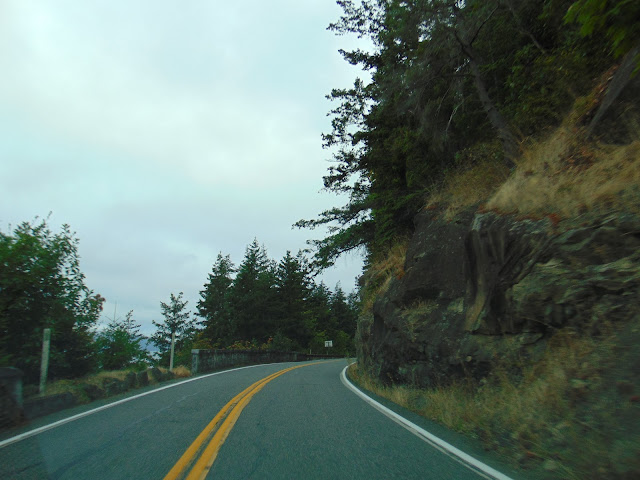 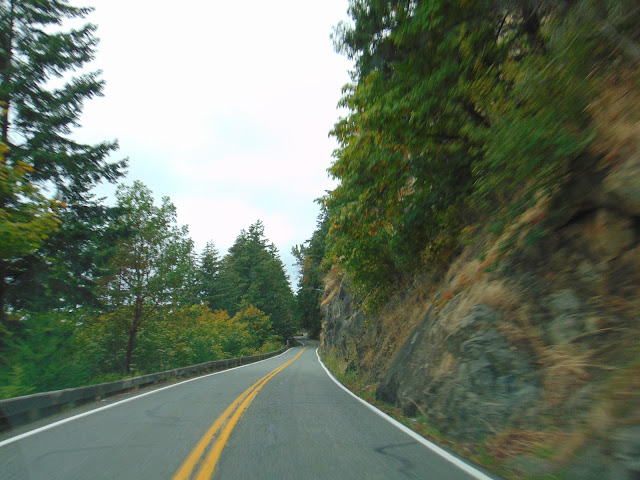 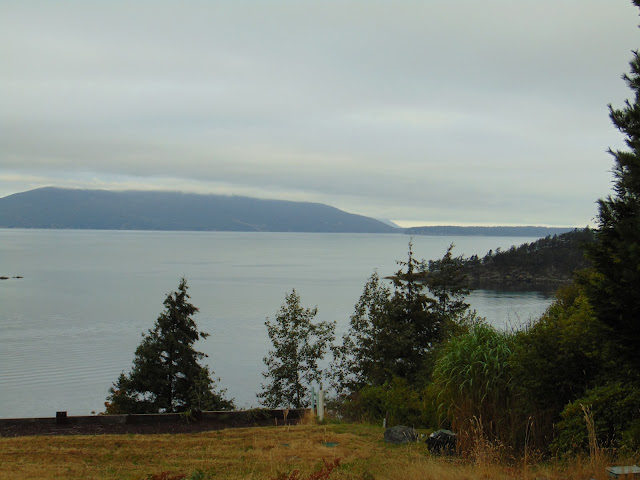 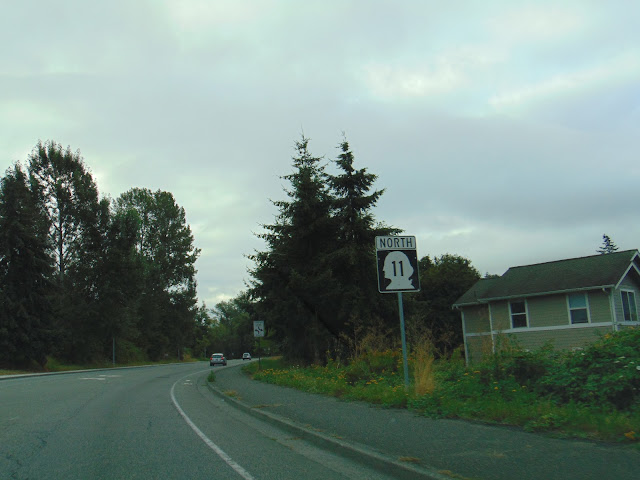 Finally, here is a YouTube video of the drive along the Chuckanut Drive as taken by user Bellinghamster Trail.