By Challenger Tom July 03, 2018
A couple years back I was in Metro Detroit, against my better judgement I decided on a ruins hunt in the City. 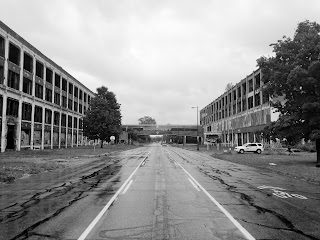 Why am I featuring a city of 673,000 approximate residents on a Ghost Town Tuesday?   The reason is two fold; back in 1950 the City of Detroit had an approximate population of 1,850,000 residents at the height of the Domestic Automotive Industry.  A common definition of a "ghost town" is either an abandoned place or a place that has lost the vast majority of it's population.  With a almost 63.6% population decline the City of Detroit would certainly meet the criteria of a place that has lost most of it's population.  The second reason is simply that Detroit is the City I was born in and the truth is that I don't have many photos from when it wasn't a civic corpse.

For whatever reason the day I picked to go to downtown Detroit had to be one of the most gloomy late summer days I've ever seen in Michigan.  The rain was coming down pretty hard all day which really added to the backdrop of a decayed city.  I started the day by heading into the city via I-696, I-75, and I-94 which I took to reach Grand Boulevard.  My first stop was the streets around the Packard Automotive Plant. 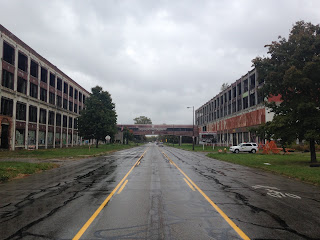 According to popular belief the Packard Plant was completely abandoned after 1958 but that wasn't the case.  Sections of the Packard Plant were used for storage warehousing well into the 2000s.  The Packard Plant is heavily decayed and a dangerous building with sections on the verge of caving in.  Supposedly when the Packard Plant was bought in 2013 the whole factory or at least sections were supposed to be renovated.  I'm to understand there was a ground breaking ceremony for renovation was held in 2017 with an anticipated completion date of sometime in 2019.

Either way I'm skeptical that much is being worked on or will be after hearing similar stories for decades.  A quick view of the building exterior around Grand Avenue didn't incite much confidence in terms of structural stability.  Its hard to believe people have actually gone exploring the interior of the Packard Plant with so much of it crumbling. 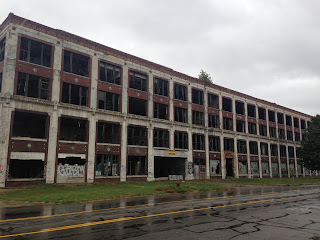 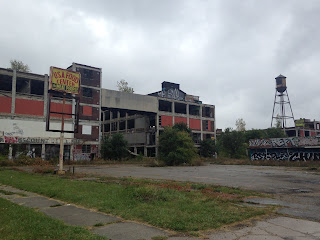 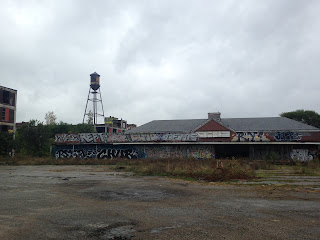 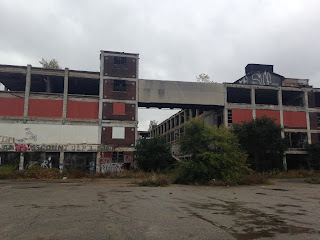 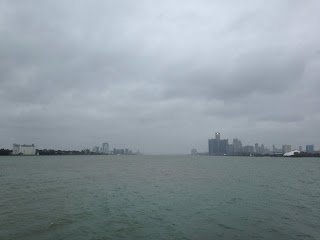 Traveling through downtown Detroit was difficult.  I had planned on seeing the eastern terminus of US 12 on Michigan Avenue in downtown but the street grid was torn up which had me bypass most of what I wanted to see.  I ended up on I-75 and used Rosa Parks Boulevard to reach Michigan Avenue west of downtown. Ironically I ended up using the same exit I had used so many times to reach Tigers Stadium.  Despite the rain there was actually kids playing baseball on the former field of Tigers Stadium.  My next stop was Roosevelt Park which overlooks the Michigan Central Station. 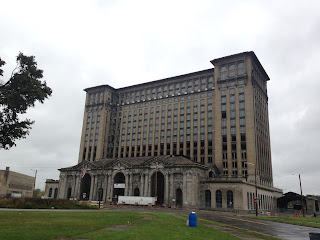 When I passed through Detroit the window installation on Michigan Central Station was not yet completed.  The Central Station might actually make it back to viability as it was purchased by Ford Motor Company this year.  Ford apparently plans to use the Central Station as office space upon completing a full renovation by 2022. 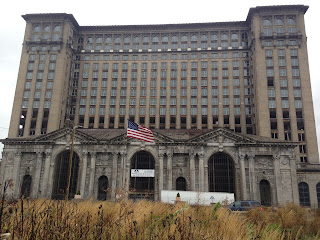 Back to the topic of Tiger Stadium.  I actually attended the last three game series at the stadium where the Tigers swept the Kansas City Royals in 1999.  Despite having attended countless games at Tiger Stadium the only photo of the site I have is from 2010.  I took this picture overlooking the site and the Ambassador Bridge from the Motor City Casino. 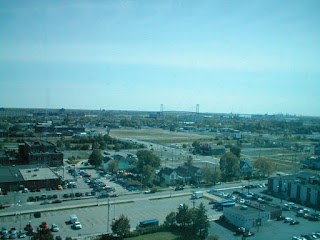