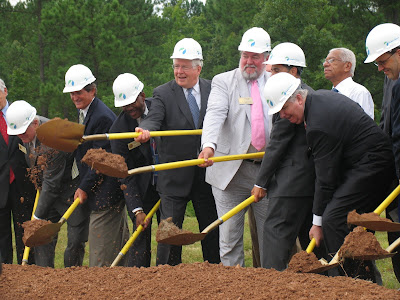 At about 10:35 this morning, the toll road era of North Carolina transportation officially began. The ground breaking for the 18.8 mile Triangle Expressway ushers in a new and controversial era of road construction in the state.

The ground breaking ceremony was held at the current end of NC 540 at NC 55 near Apex.

"This marks a new era in transportation in North Carolina," said NC Department of Transportation Secretary Gene Conti. "With dwindling transportation revenues and more fuel efficient vehicles, the state needed another tool in its toolbox to deliver megaprojects like the Triangle Expressway."

Over 100 people witnessed the beginning of the new era.

U.S. Congressman David Price, who also spoke at the event, said that today's ceremony was an example of "where we've come from and where we're going."

Construction for the first segment of the Triangle Expressway - an extension of NC 147 from Interstate 40 to the Davis Drive Interchange with NC 540 - should begin soon. That section is expected to open in 2011.

The extension of NC 540 to the NC 55 Bypass in Holly Springs still has some land acquisition to be done. However, the road should be open to traffic in 2012.

Fellow blogger, Bob Malme was also in attendance and his report on the ceremony is here.

Photos below - for the entire set - go here.

In three years or so, this will no longer be the last exit on NC 540. 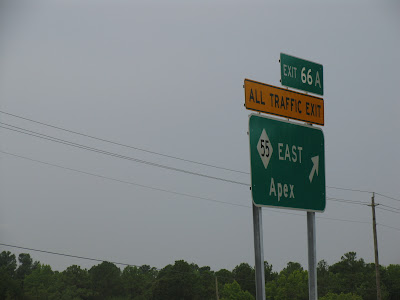 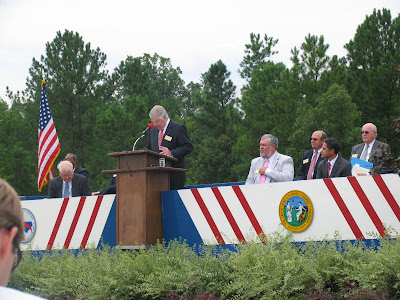 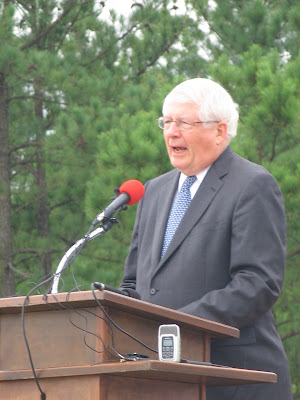 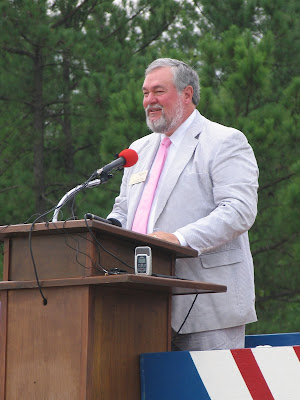 Bob Malme said…
I took some photos too, but there mainly duplicates of what Adam shot, so I'll spare everyone another look. I was going to take some shots of the existing roadways in the Triangle Parkway corridor before construction starts, but it started to rain, so I'll try again soon.

This was my first roadway groundbreaking and it was quite similar to a couple building groundbreakings I attended at Duke. Even down to the appearance of David Price (he's a Duke professor officially 'on leave'). None of them had bulldozers moving any dirt after the dignitaries, though.
10:09 PM

Georgia Road Geek said…
They should've given you guys a shovel and let you participate. :)
8:17 AM