Visiting Road Projects in The Neighborhood

By Bob Malme August 23, 2009
Since I've been concentrating efforts to chronicle the building of I-74 in SE NC and the re-signing of the Greensboro Loop over the past year, I have not focused on NCDOT and other road projects basically going on in my back yard. There are three, two if you count by contract number. These are the replacing of bridges along Garrett Road just south of US 15/501. The widening of 15/501 and bridge replacement over the New Hope Creek, and the building of a roundabout at the Durham headquarters for Blue Cross/Blue Shield of NC.

1. Garrett Road Bridge Replacements-This has been going on over the past year. Two temporary bridges and roads connecting them were created so the old bridges could be demolished and new bridges built. The new bridges have opened to traffic over the past few weeks. Here's a look at the construction area heading north on Garrett: 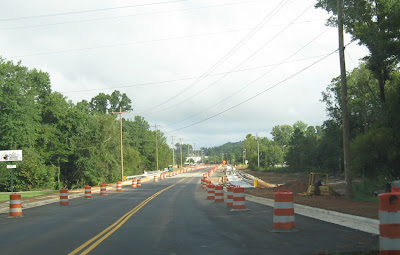 The cleared area on the right was where the temporary road/bridge was located, traffic then went to the left of the other bridge making this part of Garrett more a slalom course than a road.

The trouble with bridge building these days is that they are done with the lowest cost in mind with usually no thoughts of adding distinguishing features: 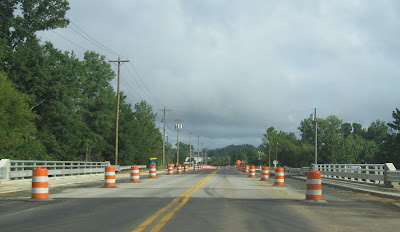 Is this the first bridge heading northbound or the second? Its the first, but is this also the first?: 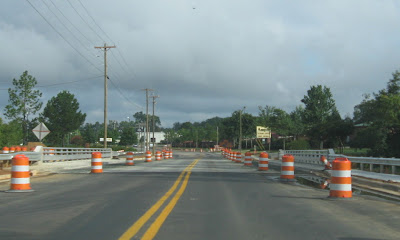 The background is the only thing that indicates it's the second. Once they add another asphalt layer this project should be done. As part of the project, they also are re-doing the Garrett Road/15-501 intersection, as this sign warns: 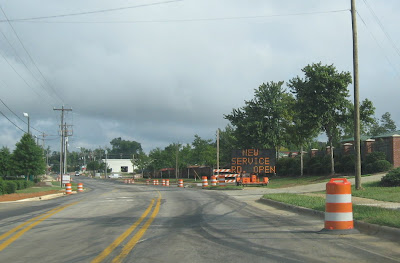 They are demolishing the old intersection of the 15-501 Service Road with Garrett Road and rerouting it behind the Room Store building and back to its old alignment: 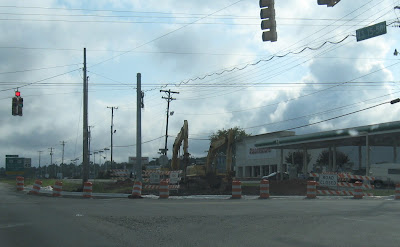 This removes traffic delays caused by left turners trying to use the Service Road while cars on Garrett are waiting for a green light, and the many close calls of people driving down 15-501 north not stopping going across Garrett to the Service Road.

2. US 15/501 Widening and Bridge Replacement
As part of the same contract, NCDOT is widening the only remaining 4-lane section of US 15/501 between Garrett and I-40 and replacing the bridge over the New Hope Creek. This is a view of the construction area from 15/501 South: 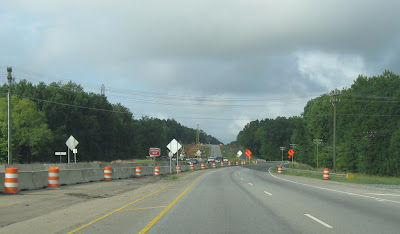 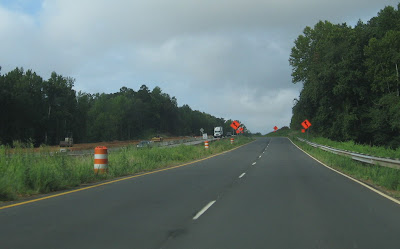 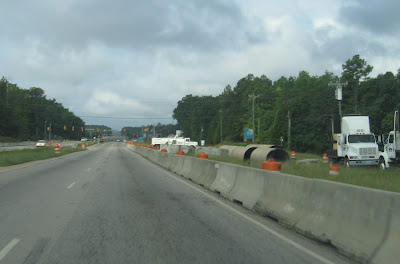 The future 3rd southbound lane beyond the jersey barriers for now are currently being used for equipment storage. More progress can be seen heading on 15/501 northbound: 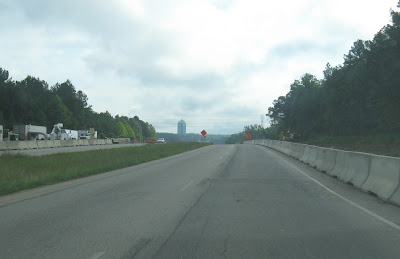 Though hard to see because of the barriers the future third lane is being graded heading down toward the future bridge seen below: 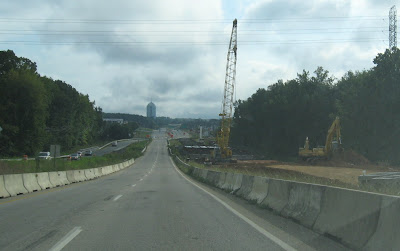 Beyond the crane you can see metal bridge decking is being added to the new bridge and beyond, to help expedite the moving of heavy equipment to the bridge, the road bed has received its first coats of asphalt. The bridge will be higher than the previous one because Durham officials demanded it be constructed to keep an open wildlife corridor along New Hope Creek. Since then they've approved new developments on both sides of the creek making the wildlife corridor even narrower and the bridge design more essential.

3. The Blue Cross/Blue Shield Roundabout
If your a member of BC/BS of NC and wondered where all their surplus money reported in the news has been going, well, at least some has been used at their Durham headquarters. They've built another new building at their University Commons location and, since they're running out of space to place more buildings in that spot, have acquired more office space at the University Place Mall further west on University Drive. So they can keep employee traffic off of University this has led to the construction of a road to connect the two office complexes. The designers felt the intersection of the existing and new roads would be a good place for a roundabout: 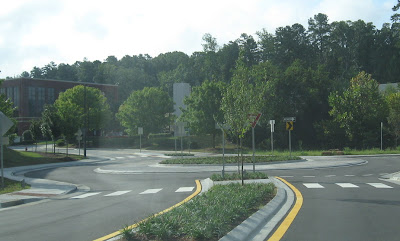 This is approaching the roundabout from University Drive a couple blocks west of its intersection with the Martin Luther King Parkway. The new road is off to the right. 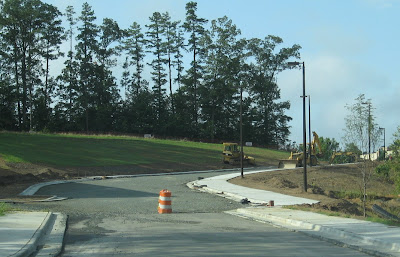 The road has not been completed yet. Sidewalks were put in last week. This week could see the first asphalt being placed on the roadbed. The buildings of University Place can be seen at the top right. The roundabout has been open for about two months with only the original road using it. 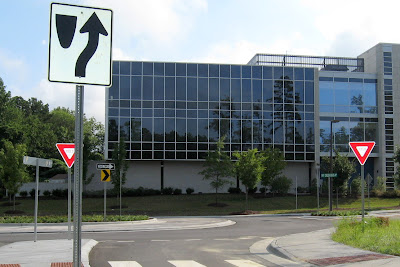 This is looking at the roundabout from the completed end of the new road which, as of now, does not have a name, just a road sign saying 'To University Place' and an arrow. Beyond is one of the new buildings put up in the last two years. The last photo is the view going west and coming from the University Commons shopping center and my Harris Teeter: 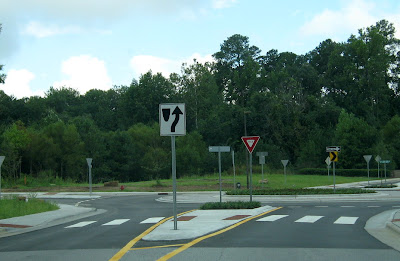 My next entry will be photos taken along the path of the future Triangle Parkway.