By Adam April 24, 2008
We took a weekend to the mountains...staying overnight in Blowing Rock and then spending the day exploring the area.

For the entire photo set on flickr...go here.

What started out as a gorgeous day in Raleigh turned into a foggy, rainy, and later stormy evening in the Mountains. The rain started just west of North Wilkesboro, the fog really kicked in on the ascent up the Blue Ridge to Deep Gap and stuck around the rest of the day. Oddly, the fog lifted as the night went on.

We made a quick stop in Burlington and went through downtown Graham. There's quite a few older wall advertisements and billboards in town. It's certainly worth a return visit for more photos. 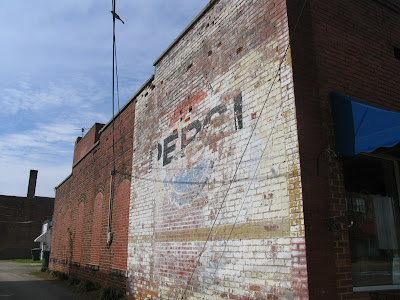 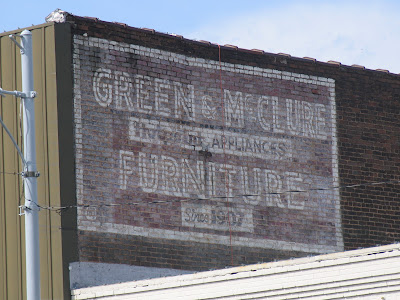 Sunday Morning we spent sometime along the Blue Ridge Parkway before heading to the Mast General Store in Valle Crucis.

Our first Parkway Overlook was at the Thunder Hill Overlook just north and east of Blowing Rock. 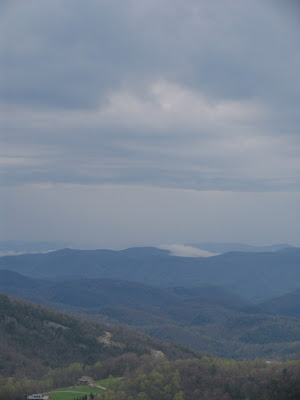 They don't call it the Blue Ridge Mountains for nothing. 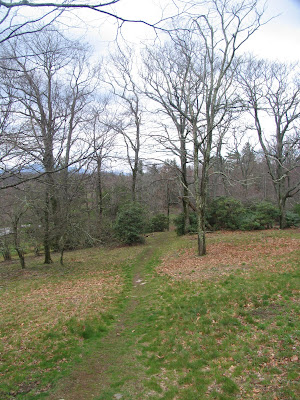 Across from the overlook is a brief trail (shown above) that goes past a small family cemetery (shown below). 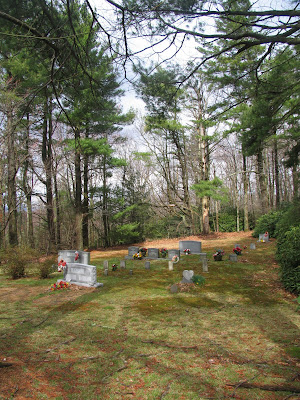 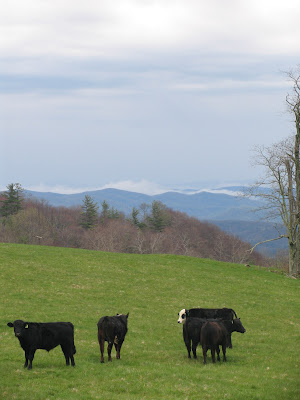 Although it was overcast and chilly, there were still some great views like above. 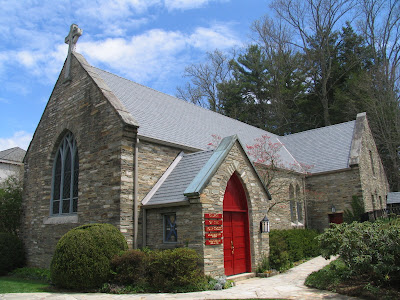 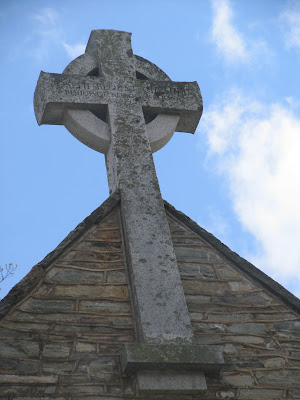 In the valley below the Church of the Holy Cross, NC 194 crosses Craborehard Creek, and after the rains from the day and night before, the creek had some soothing small waterfalls. 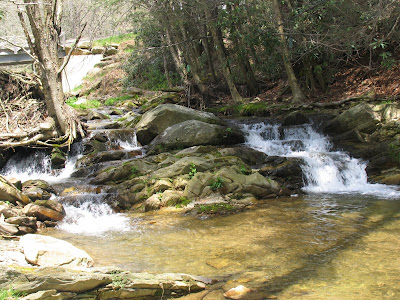 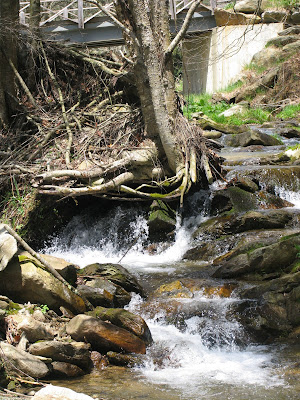 From there is was over to Granfather Mountain. We took Broadstone Road (SR 1121) from Valle Crucis to NC 105. Be sure to stop at The Ham Shoppe for a bite to eat. The sandwiches are delicious and the folks that run the place are very hospitable.

Grandfather Mountain is located off of US 221 about a mile south of the Blue Ridge Parkway and two miles north of NC 105. Admission is $14/per person, with AAA it's $12. There's plenty to do at the park. There's a wildlife habitat (more on that later), numerous hiking and nature trails, and of course the mile high swinging (suspension bridge). 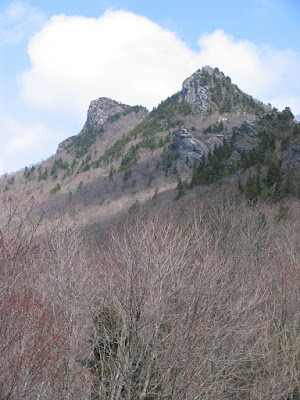 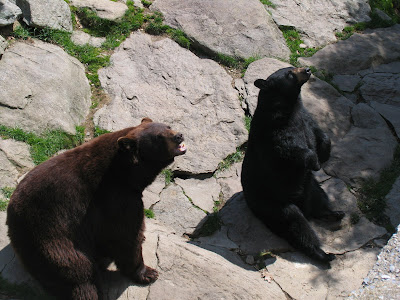 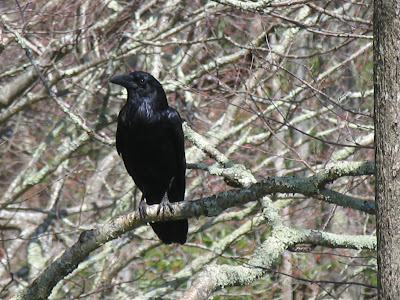 I love this shot of the raven. 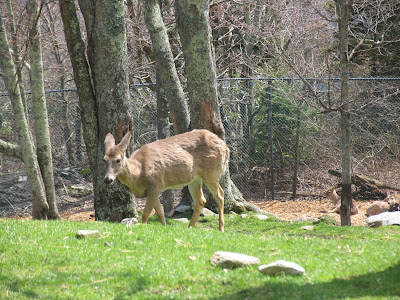 Of course, the highlight of Grandfather Mountain is the Mile High Swing Bridge. Opened in 1952, the 252 foot suspension bridge over an 80 foot chasm can make for an interesting experience. Especially when the wind is quite gusty. 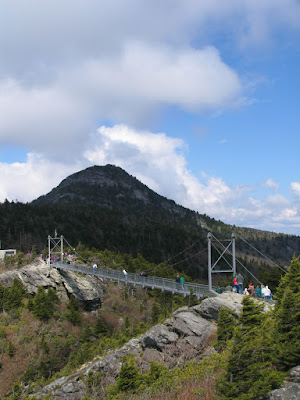 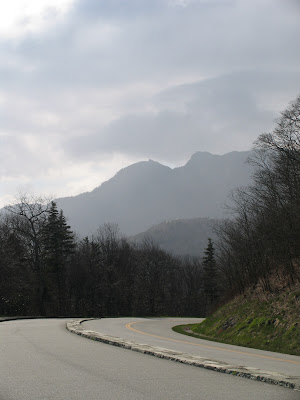 Before leaving the Parkway, we stopped at Price Lake and headed around the Price Lake Loop Trail that is about 2.3 miles long. It's a nice hike and easy to follow, even though it's not marked. At the far end of the lake, it is rather swampy, but only a minor inconvenience. Price Lake is popular with anglers and kayakers and is quite a restful spot overall. 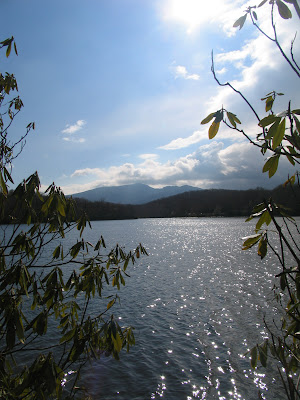 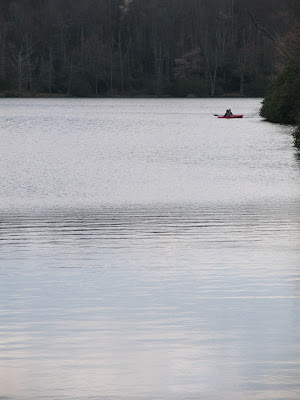 There is one sad part about the Parkway. In the Grandfather to Blowing Rock Area, there was quite a few cases of vandalism. Almost all overlook signs were missing (only the sign posts were standing) and there was a few overlooks that were unfortunately well littered. It's a shame that carelessness was so wide spread on that section of the very scenic highway.

But overall a great trip, we took over 200 photos and got to explore more of North Carolina's mountains.

Anonymous said…
Hi Adam,
My name is Jane and I'm with Dwellable.
I was looking for blogs about Blowing Rock to share on our site and I came across your post...If you're open to it, shoot me an email at jane(at)dwellable(dot)com.
Hope to hear from you soon!
Jane
5:17 PM