By Doug April 30, 2008
Regarding the old "80" posts in Tribes Hill, there are also some other gems in the immediate vicinity to be found. Michael Moroney, a frequent contributor to the Usenet newsgroup misc.transport.road and webmaster of Vermont Roads (among a few other sites), had asked why I didn't post photos of the old New York State Highway signs in the area. I wanted to focus on the cement posts. However, I've decided to post a few extra photos from the area. 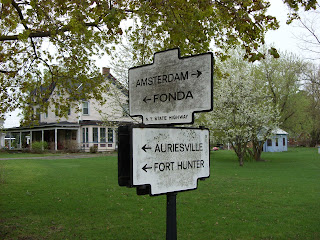 The aforementioned old signs, with destinations of Auriesville and Fort Hunter (on the other side of the Mohawk River). The Amsterdam and Fond destinations denote that this was an old alignment of NY 5. For some reason, the original lettering was scraped off (these are cast iron signs which originally came with embossed lettering) and then repainted. It's also possible the signs were recreated. 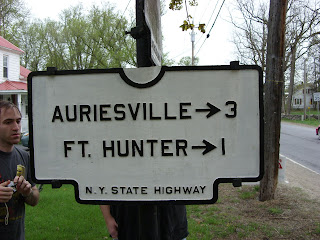 An original cast iron destinations sign. You may have noticed the half of a circle which has been broken off. At one time, New York State had put the route number inside the circle. 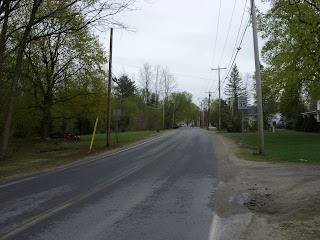 A view of old NY 5 (Mohawk Dr.). Currently, NY 5 uses an alignment to the north of the hamlet of Tribes Hill.

Anonymous said…
Not sure how old this blog is....but I'm currently the owner of the house and property the route marker is on.....was digging up information about more information on the house and came across this!
7:32 AM