Boston Signage, The Good, The Bad, and the Missing

By Bob Malme March 23, 2015
I posted an entry back in November 2013 displaying examples of new signage being placed in the streets of Boston, some of which was completely wrong. A February 2014 'expose' report on the local Fox television station led to Boston DOT officials blaming contractor error for the sign mistakes and vows to fix them. During last Spring much of the wrong signage was removed or replaced. For example this reassurance marker for West MA 2A that had a wrong directional banner: 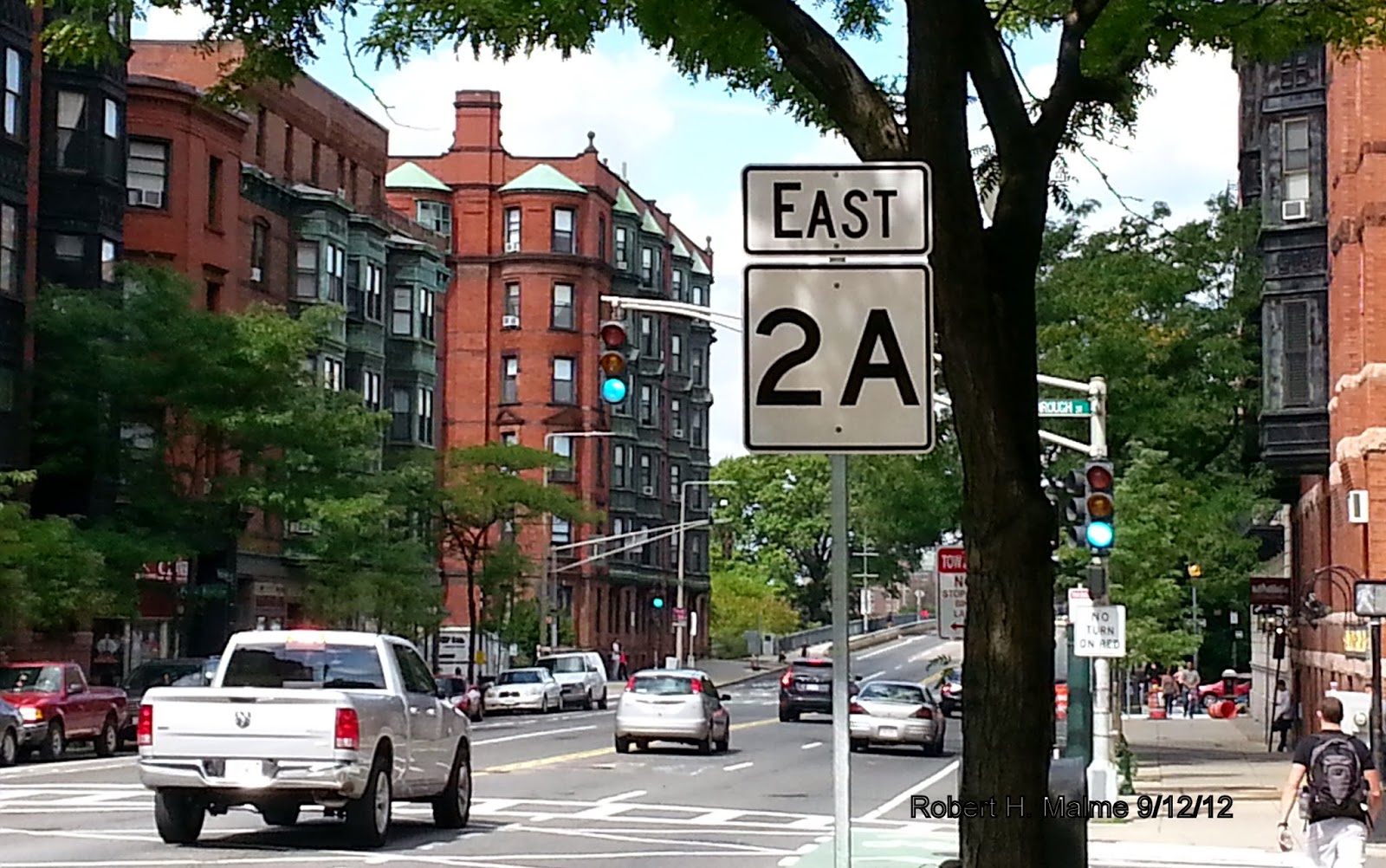 Was corrected with a replacement West banner. Most of the MA 2A signs put up in error further east along Mass. Ave were removed, such as these at the corner of Tremont and Mass. Ave: 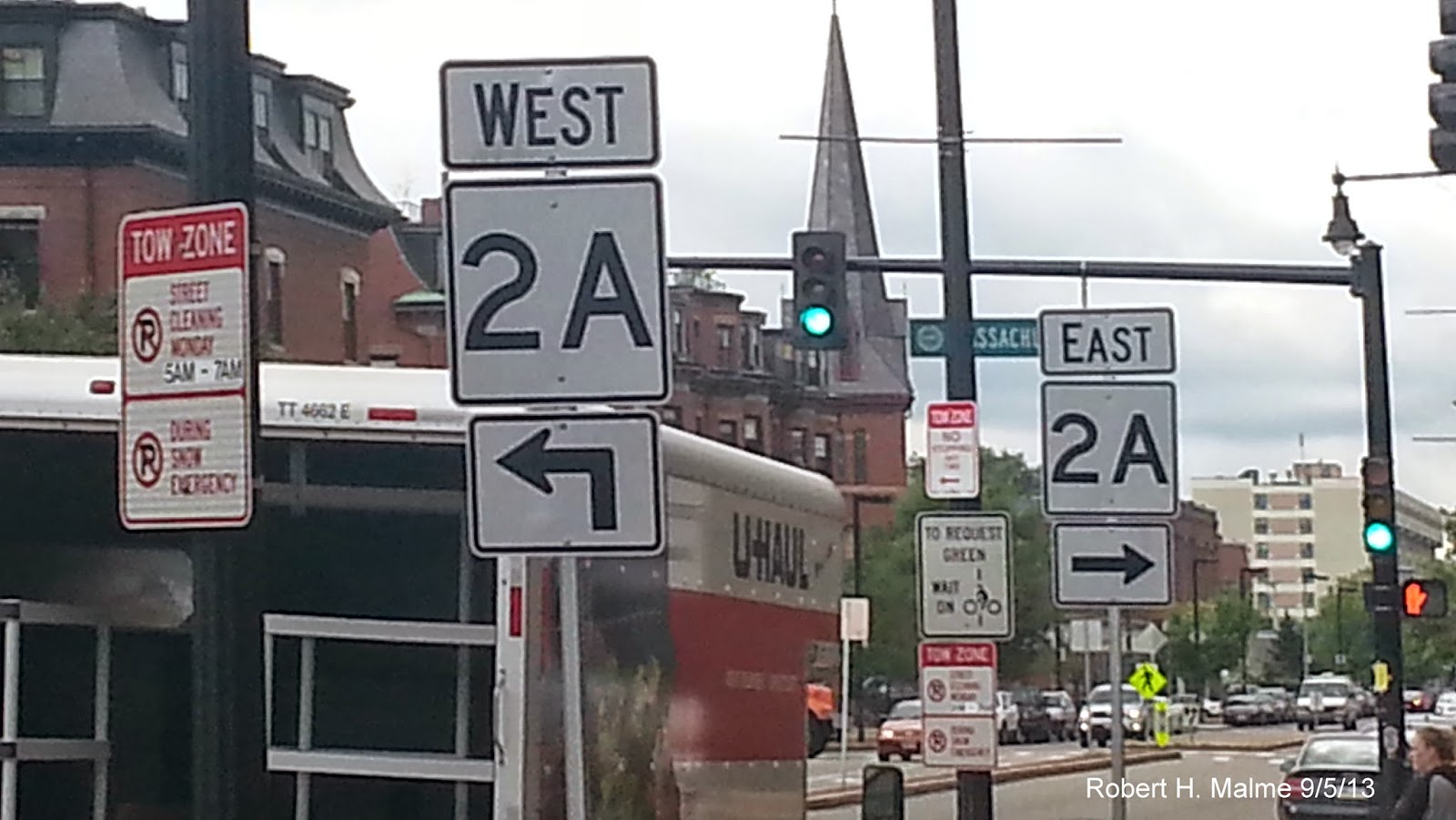 A couple though stayed but had their directional banner replaced with 'To', such as by the Christian Science Plaza, before: 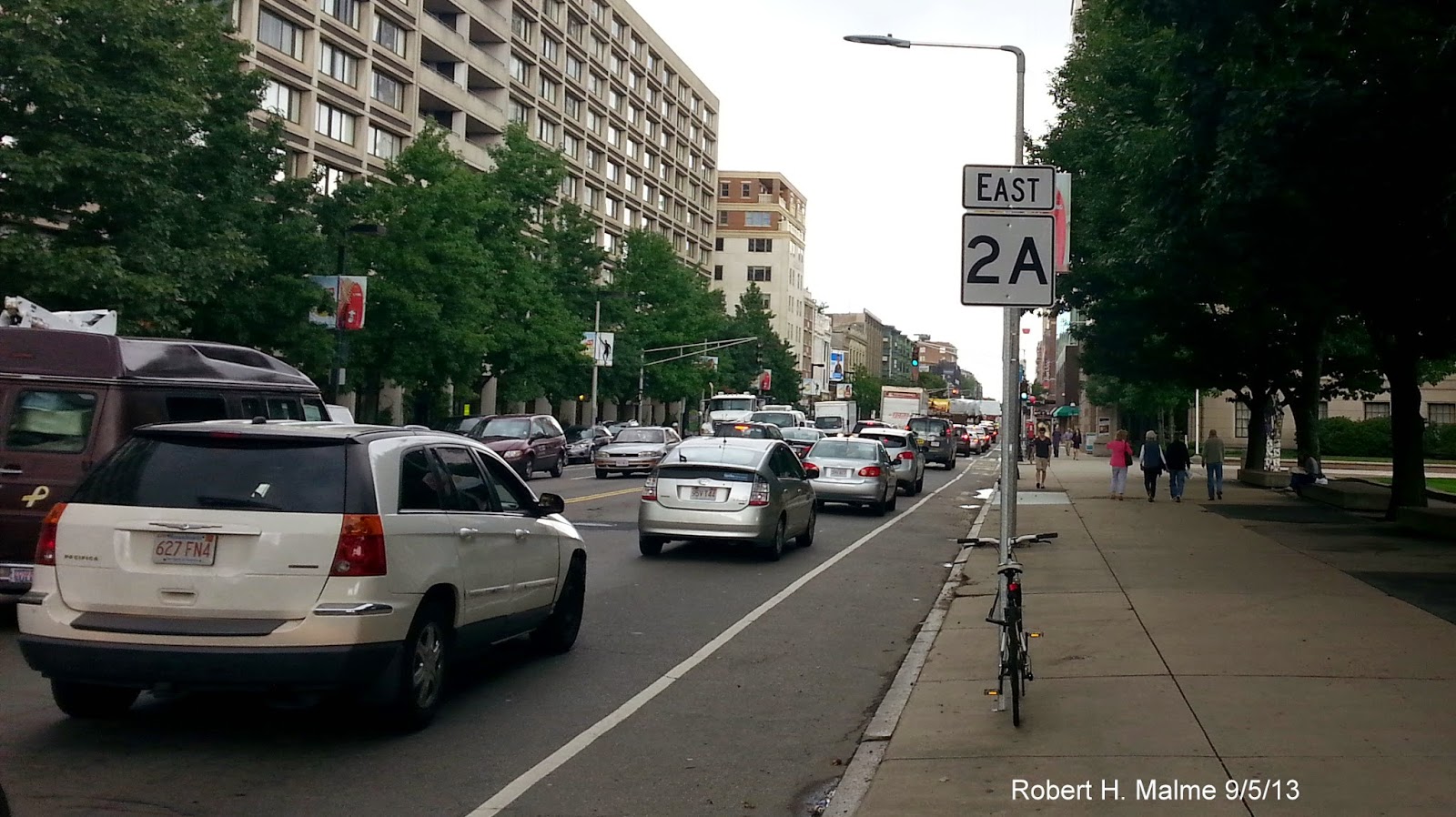 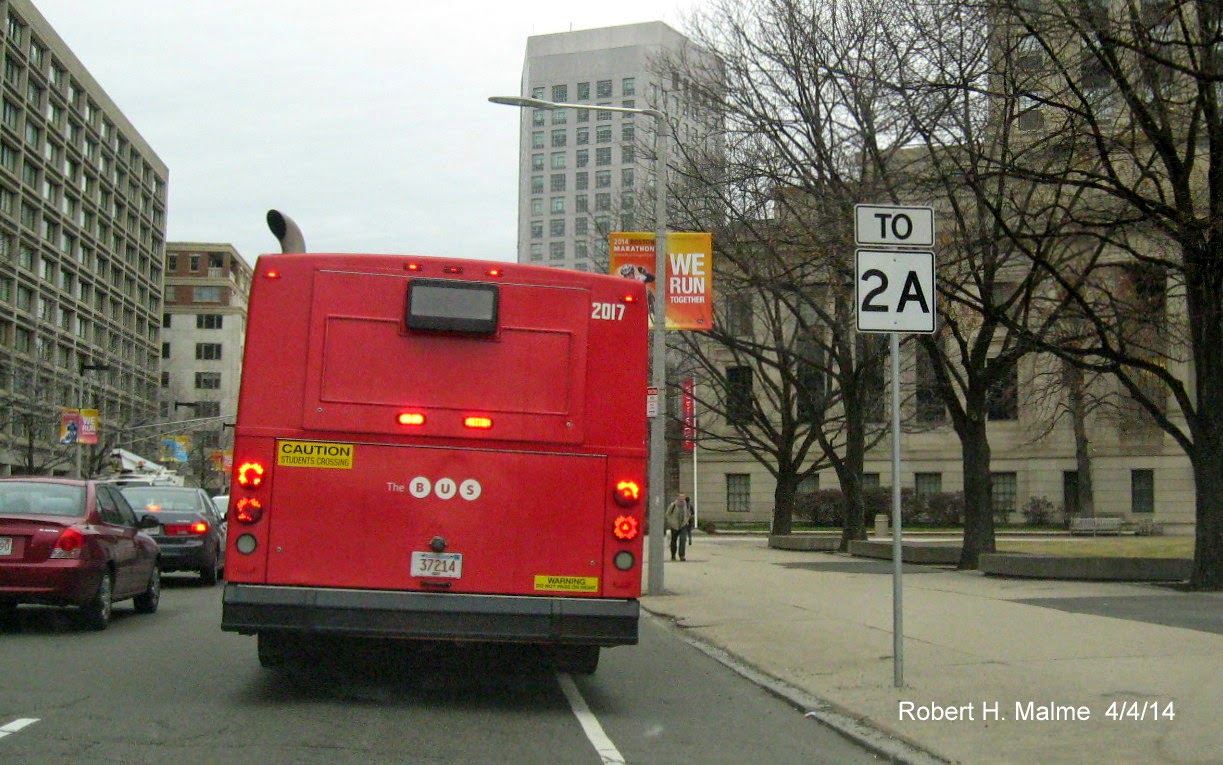 Mistaken signs were placed for routes that did exist as well. In the case below, drivers on Beacon Street approaching Arlington saw signs directing them to MA 28 North to turn left: 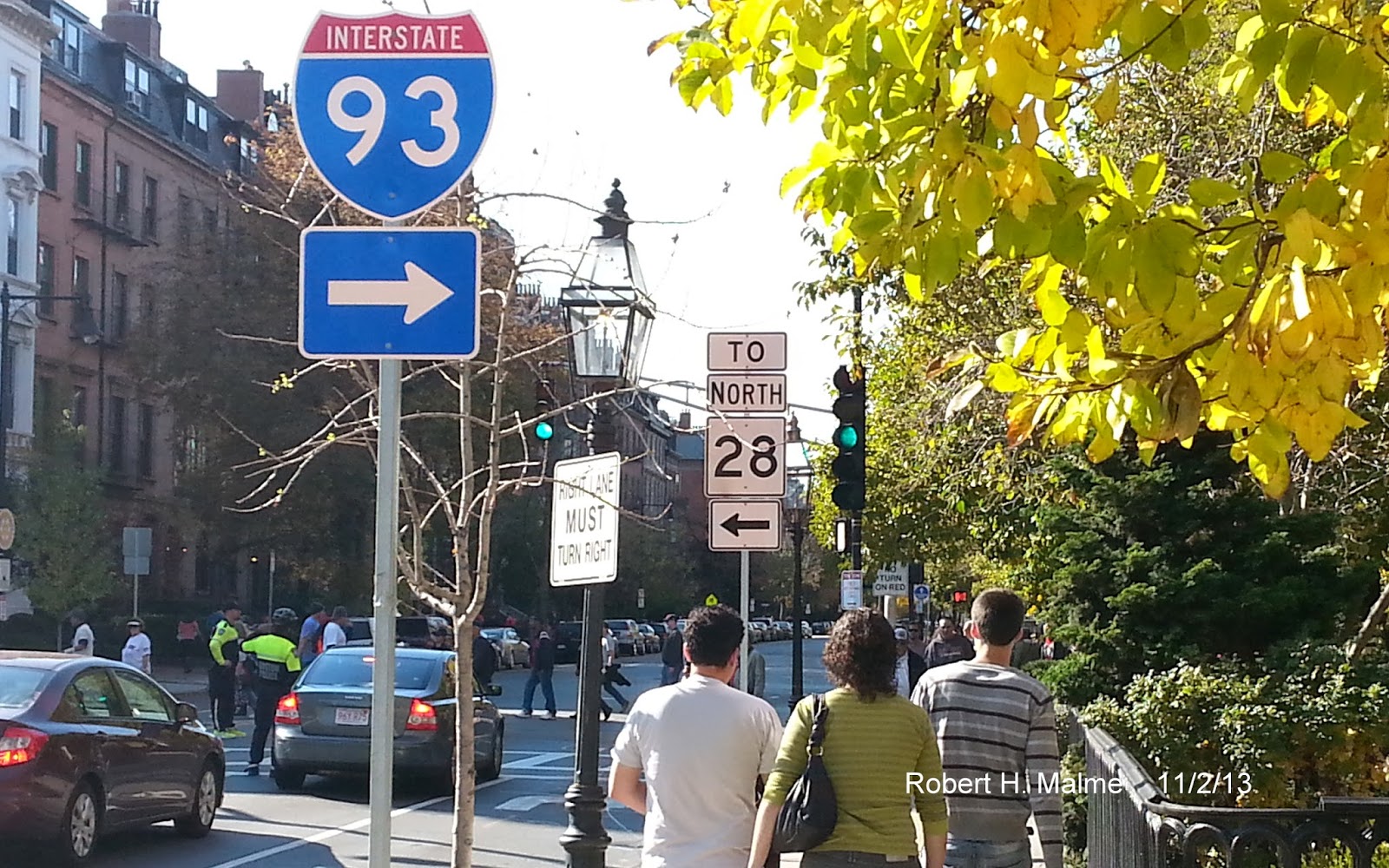 When in actuality, Beacon Street is already MA 28 North here and to stay on it you just have to take the next right (or stay on Beacon and you're now on MA 28 South). This was fixed last spring also: 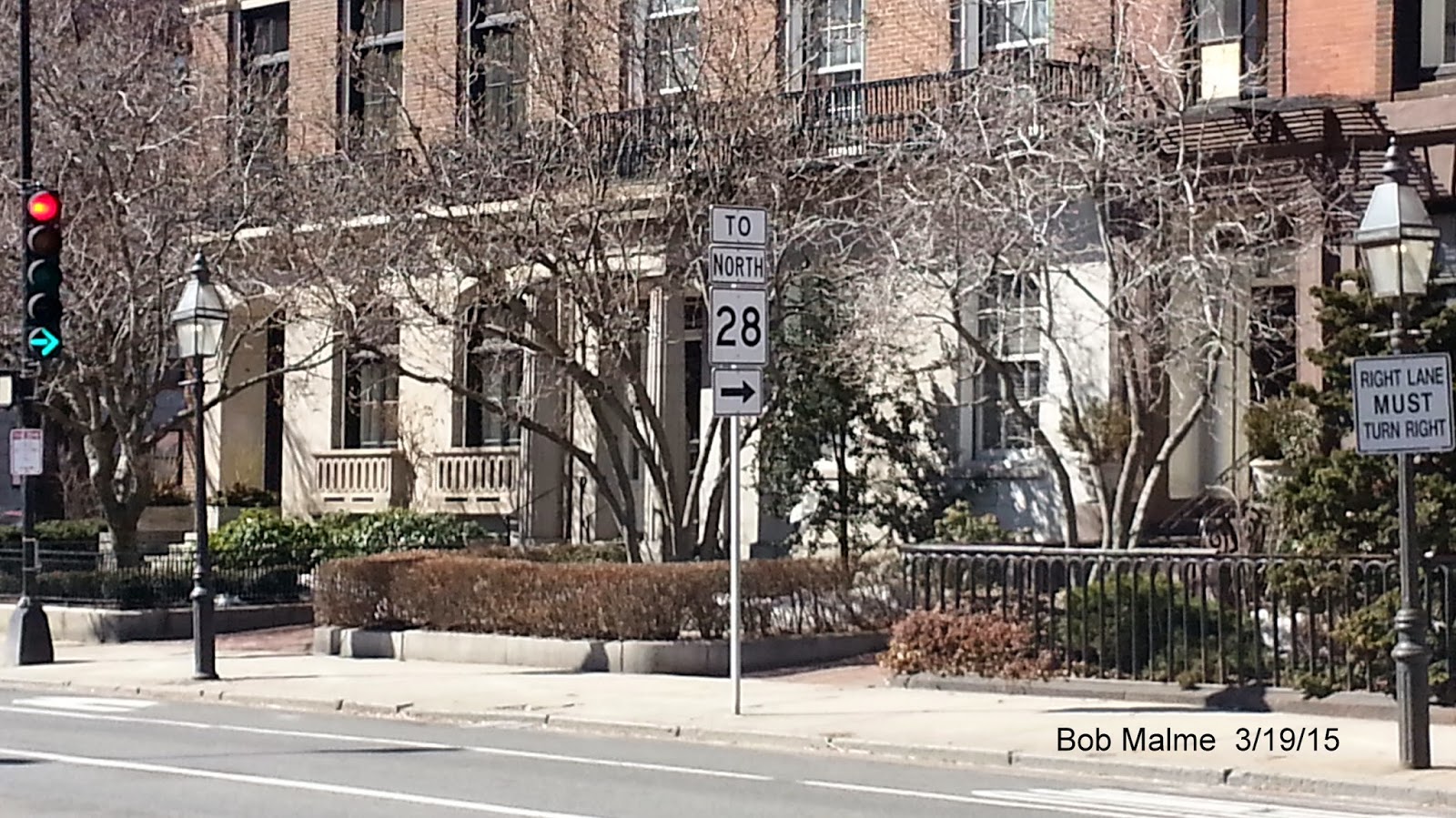 Although, as you can see, the incorrect 'To' banner remains.

However, a tour of city streets taken in March 2015, showed some mistakes still remain. For example, drivers looking for the Mass Pike or I-90 West on Boylston Street still see this sign: 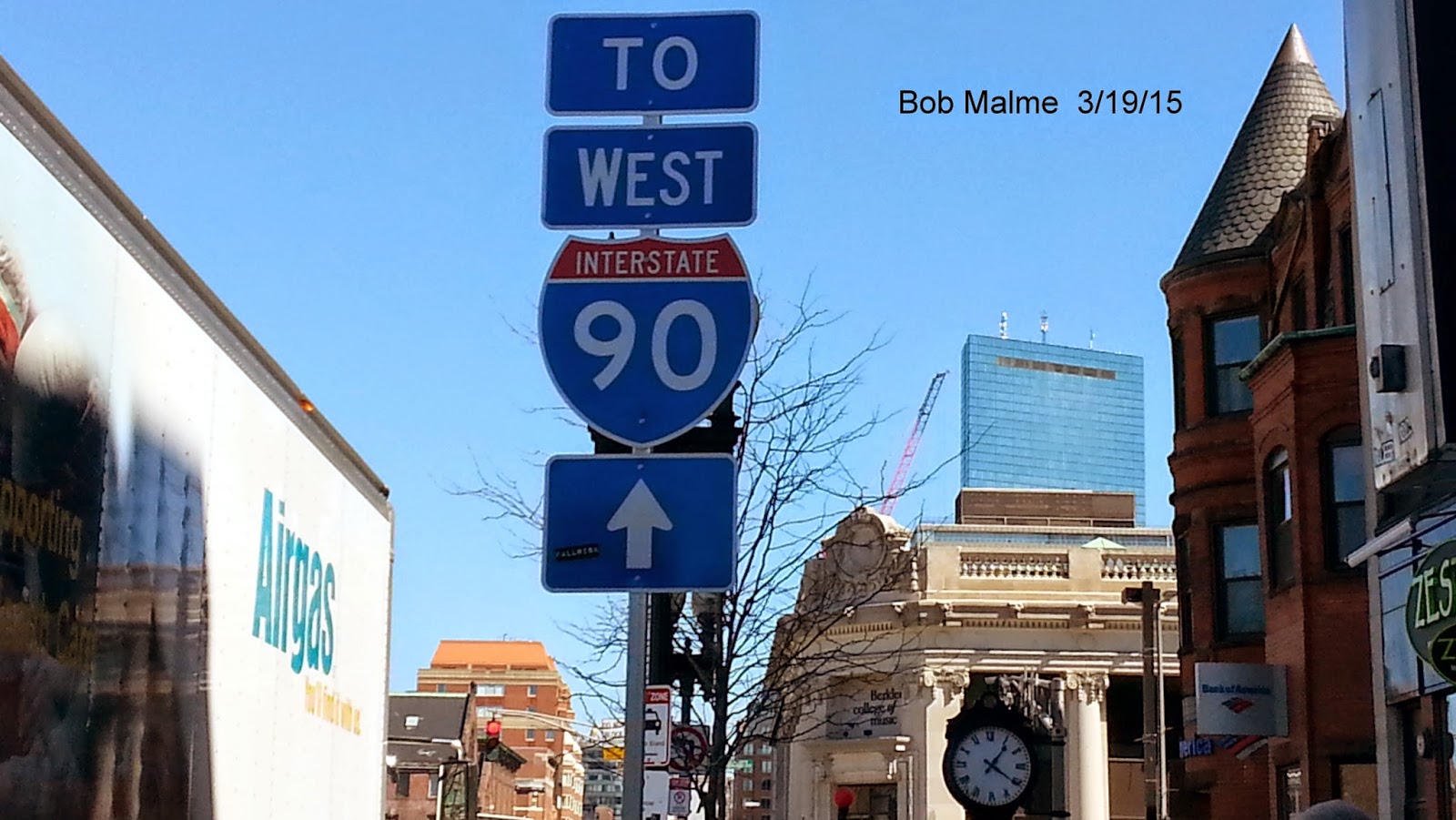 Directing them straight through the intersection with Mass. Ave. You can get to I-90 by going 1/2 mile to Dartmouth Street and taking a right, but it would be much easier to take a left and take the next left onto the on-ramp on the other side of the Mass Ave bridge over the Pike. Drivers on Comm Ave (MA 2) heading west into Kenmore Square still see this sign pairing: 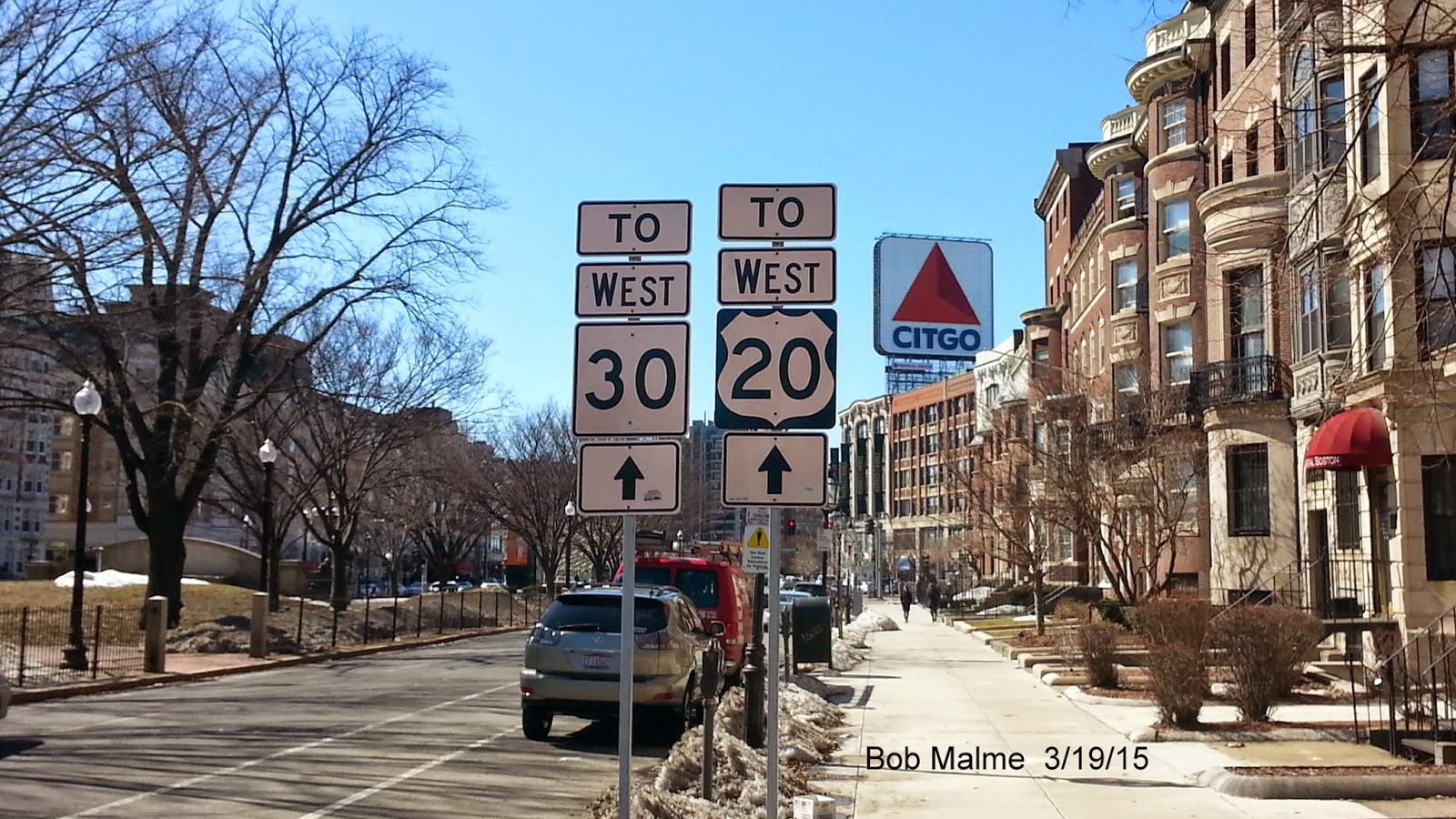 While, again, technically true, Comm Ave becomes US 20 west of Kenmore Square, it does not, as signs placed in 2013 still say, become MA 30 also. MA 30 does not begin until the split of Comm Ave with US 20 in another mile or so from here. 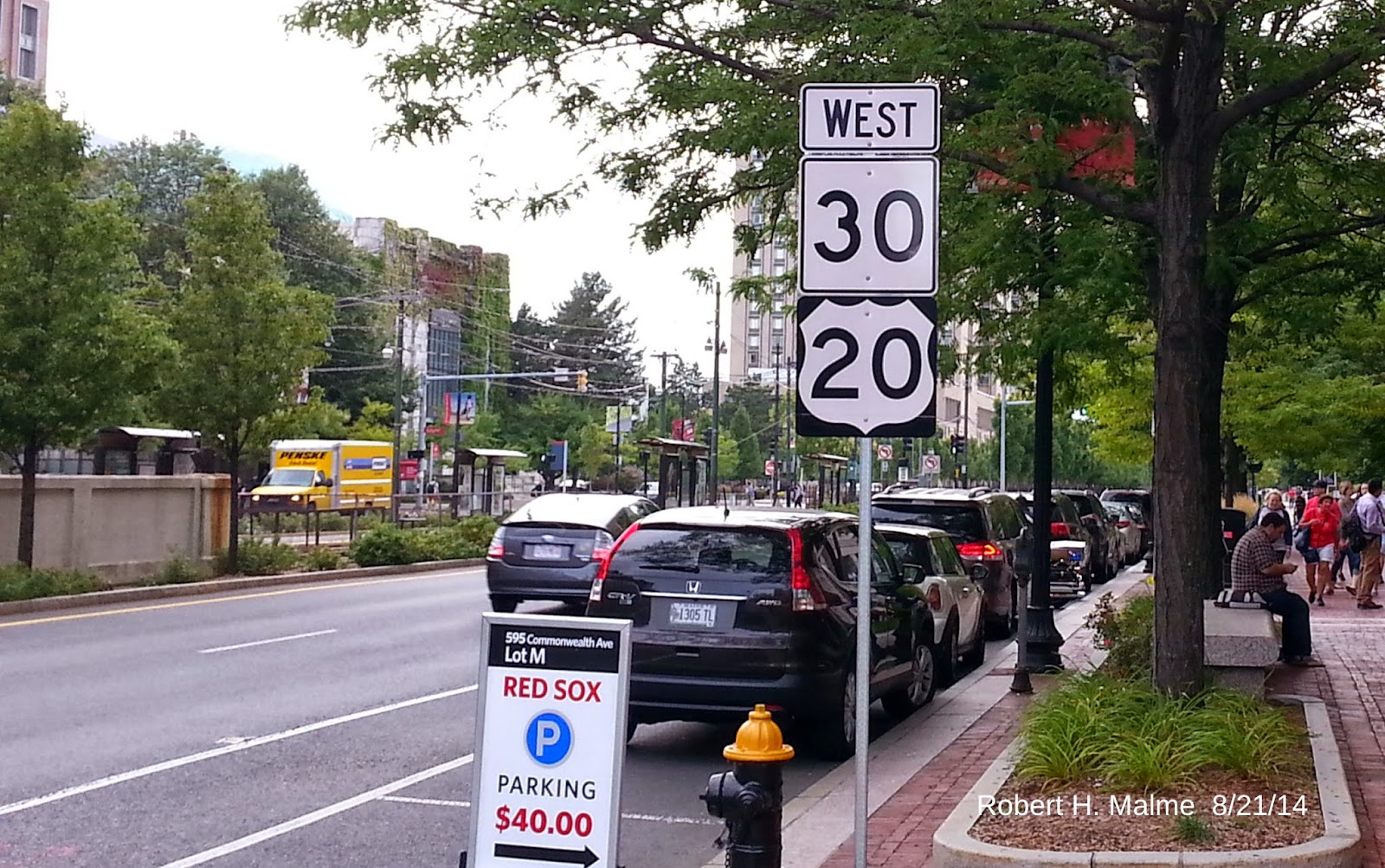 Fortunately, these mistaken MA 30 signs were never placed eastbound near Kenmore Square (and yes, you can park for the Red Sox game for only $40).

Despite the increase in route signage, the city still has a strange habit of not marking the beginning of routes. For example, MA 9 West begins at MA 28/Charles Street by the Park Plaza Hotel. There's no signage though: 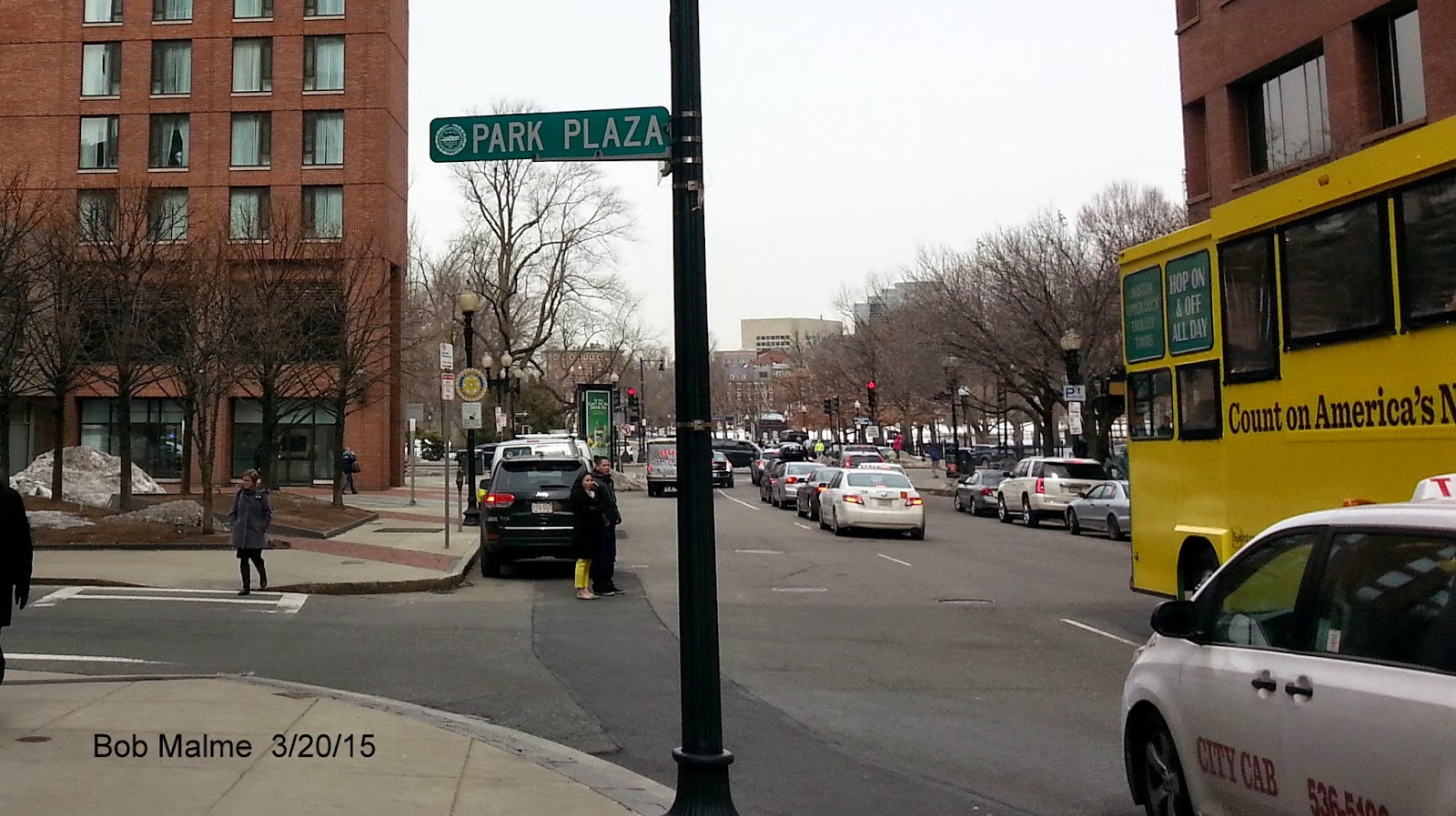 Go a block west though, and you see your first West MA 9 trailblazer: 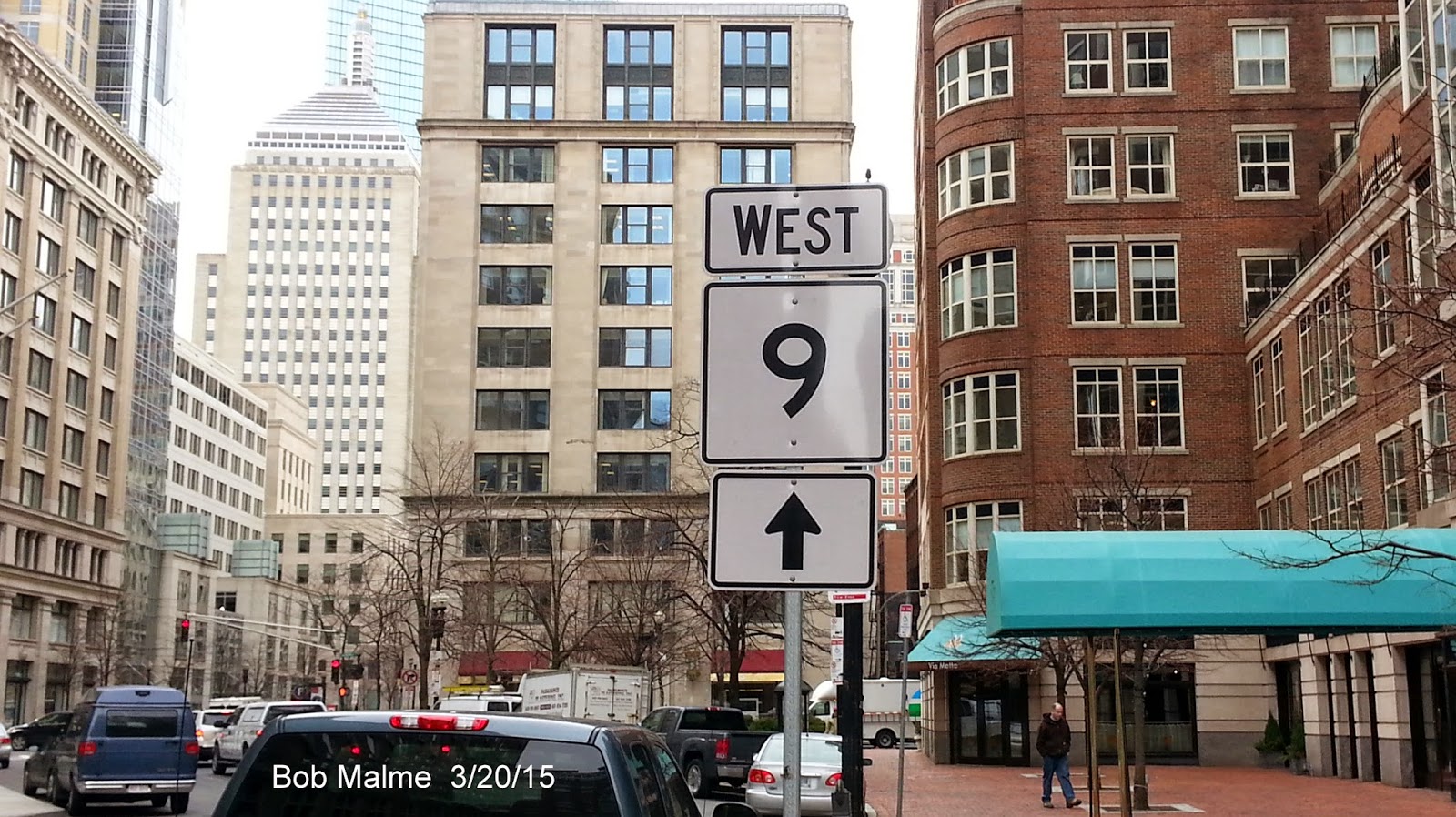 MA 2 West Begins (and MA 2 East Ends) at the corner of Boylston Street and Charles Street / MA 28 North. No sign of Route 2 here though: 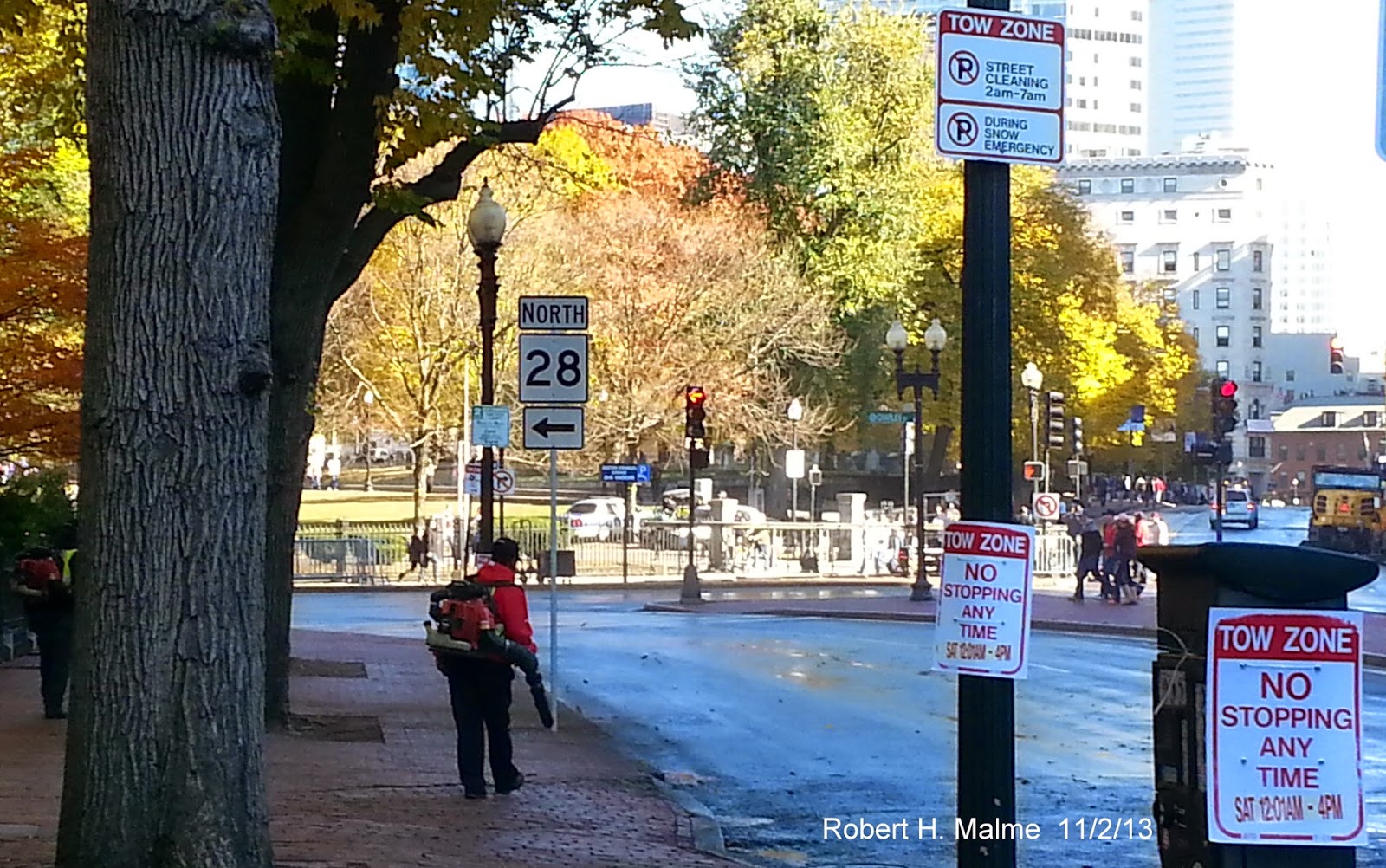 You have to go to the other side of the Public Garden to see the first West 2 reassurance sign:
(behind the MA 28 trailblazer): 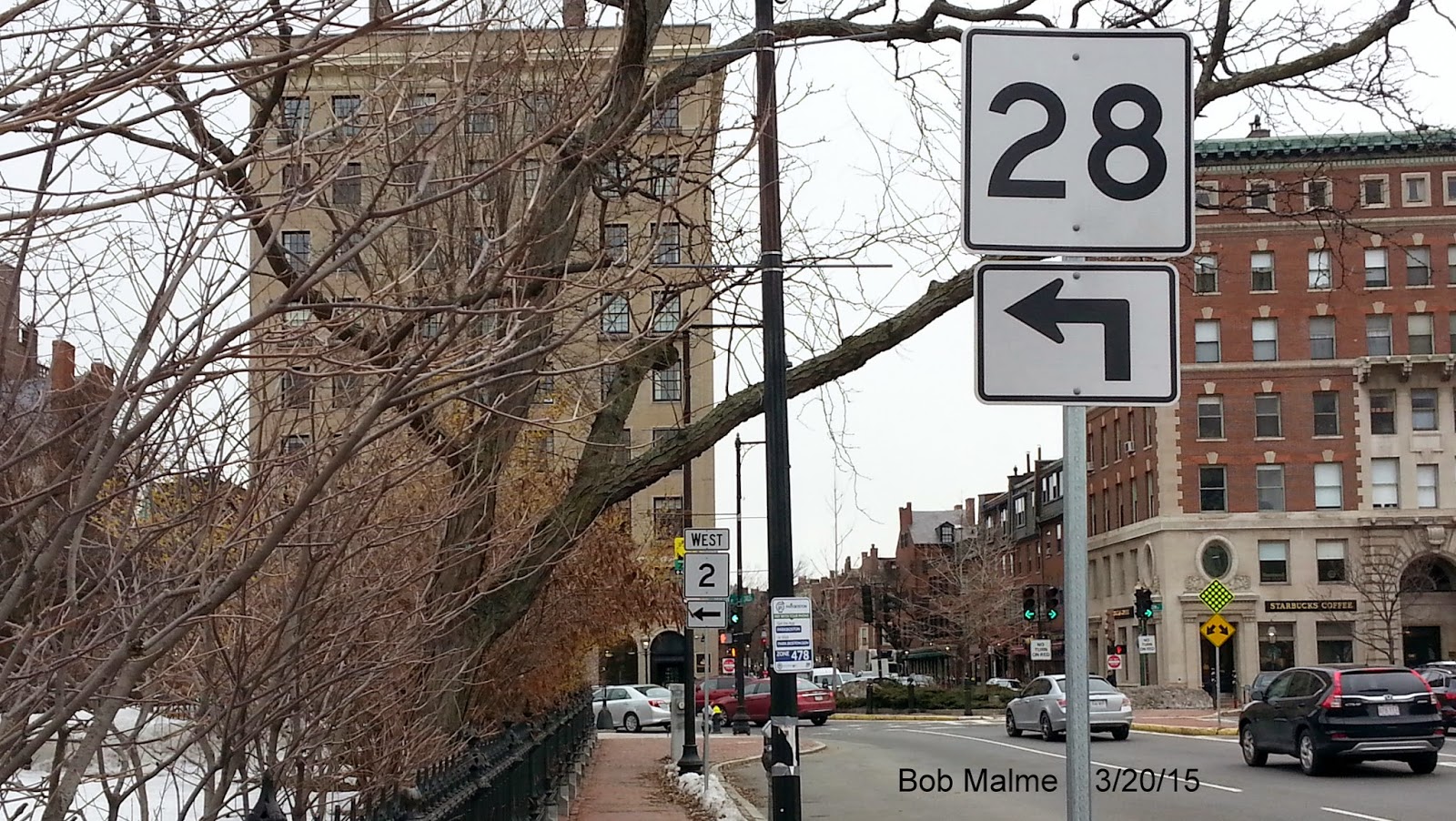 Another MA 28 sign like the one above would be useful at the corner of Stuart and Tremont Streets where the route goes left, but, only if you see the reassurance marker on Charles Street would you know it turns there: 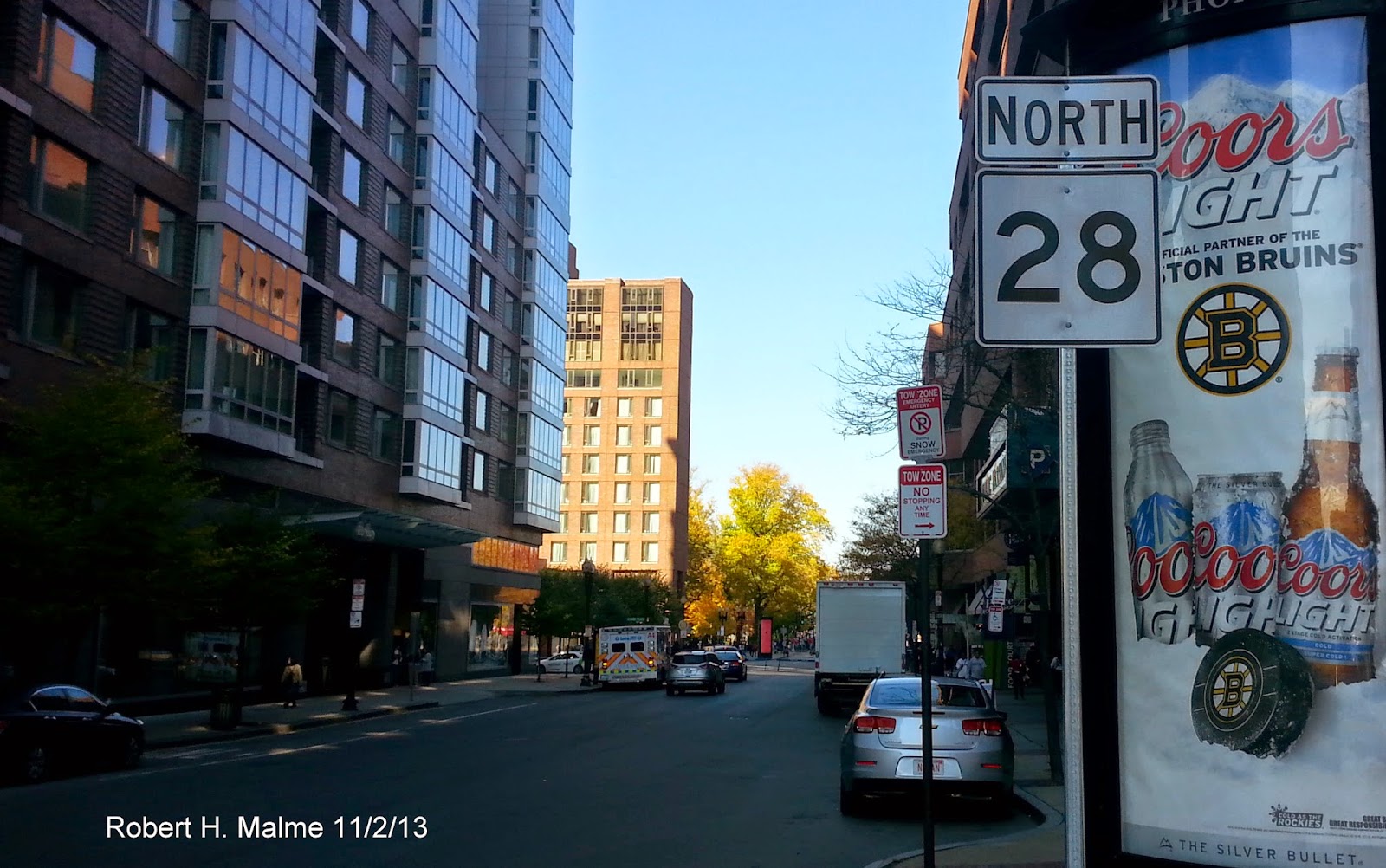 And don't get me started about MA 2 west of Kenmore Square. While there are several new MA 2 markers along the route back to Comm Ave: 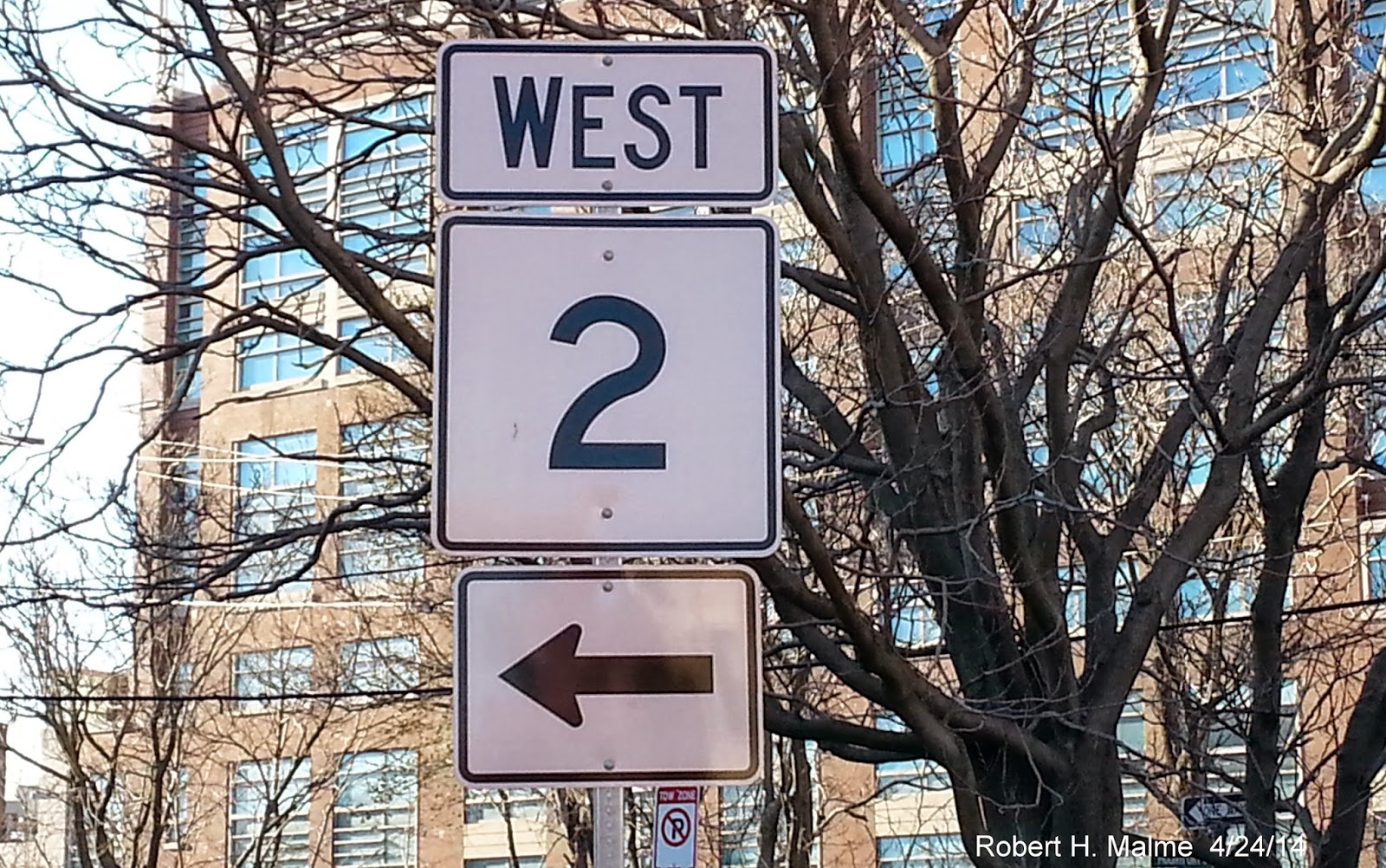 This is one of the few trailblazers that were placed on the roads between Beacon and Comm Ave. You will not find any MA 2 shields telling you where the route west leaves Beacon or that to go East you have to turn left on Beacon. Another habit is not putting up the most important sign. Approaching the intersection of Arlington Street and Columbus Avenue you see these signs for I-93 and MA 28: 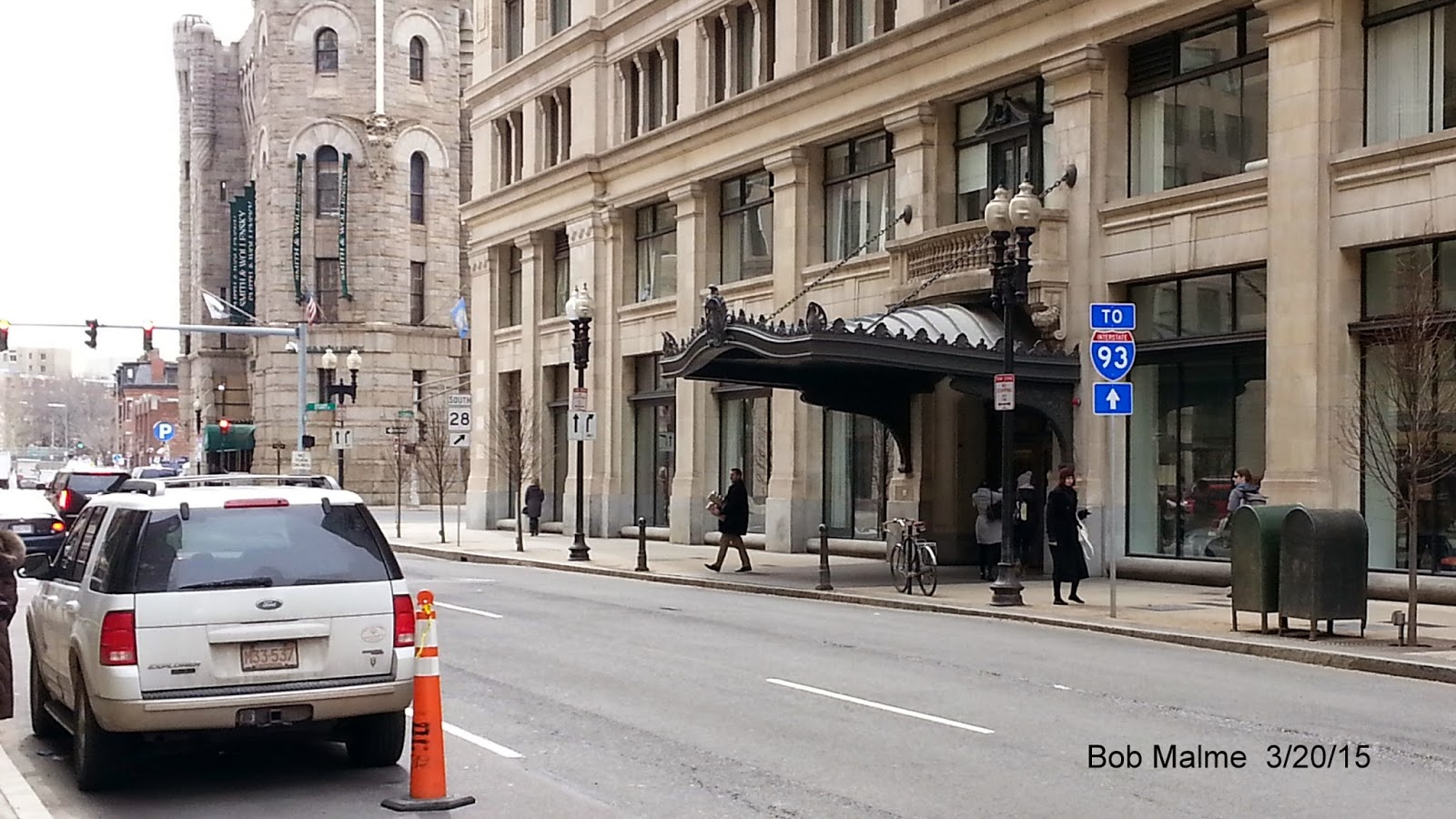 However, there is an entrance to the Mass Pike West two blocks south of Columbus Ave. You guessed it, there's no trailblazer for West I-90.

Part of the problem with signing MA Routes within the city of Boston is due to some of the convoluted paths many routes take. If I were in charge of MassDOT I would make, at least, the following changes:
1. MA 2 would revert to its old route through Cambridge (current MA 2A) and continue in Boston beyond Comm Ave. down Mass Ave. to the interchange with I-93 at Melnea Cass Blvd.
2. US 20 would be extended east from Kenmore Square to re-take its original route to Arlington Street.
3. MA 109 which currently ends at the former US 1 at the VFW Parkway, would be extended along the old US alignment to MA 9 / Huntington Avenue.
4. US 3 could end at I-95/128 in Burlington, or its path could be changed so it follows I-95 South to MA 2 East to Cambridge, then follow what was MA 2's route onto Memorial Drive. It would also replace all of MA 3 to Cape Cod, until the MA 3 / Pilgrims Highway could be designated an I-93 spur route, then US 3 could end at Leverett Circle.

If anyone has any comments, or suggestions, feel free to post them.