By Bob Malme December 30, 2014
Here's another end-of-the-year summary of the progress made in completing I-73 and I-74 in North Carolina. While 2014 did not see the amount of projects completed as was the case in 2013, there was a significant milestone for I-74 and the start of additional projects for both routes which shall add to their total mileage in the years ahead.

A. I-73
It was hard to top the increase in mileage the completion of signage projects in 2013 did for I-73. The route went from being signed as an interstate for 46 miles at the end of 2012 to 77 miles at the end of 2013, an increase of 40%. The route was now officially signed from I-40 in Greensboro to south of Ellerbe. Here's the Begin signage in the background of a photo of the new signage for the US 220 interchange, Exit 25, courtesy of Mark Clifton: 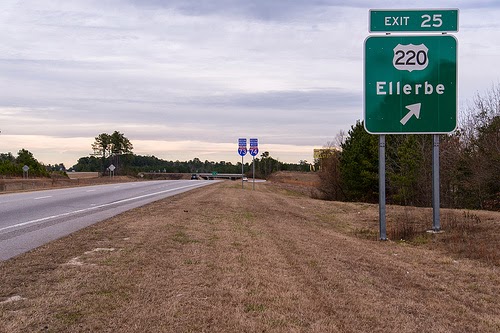 And here's a closer view of the Begin signage itself: 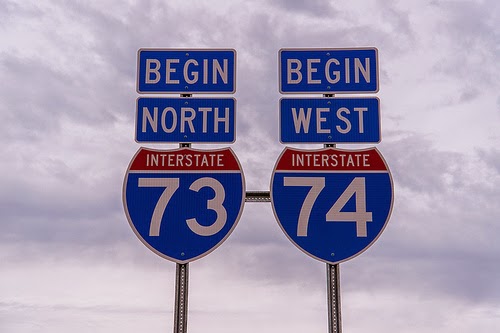 On the other side there is the End signage, photo courtesy of Chris Curley: 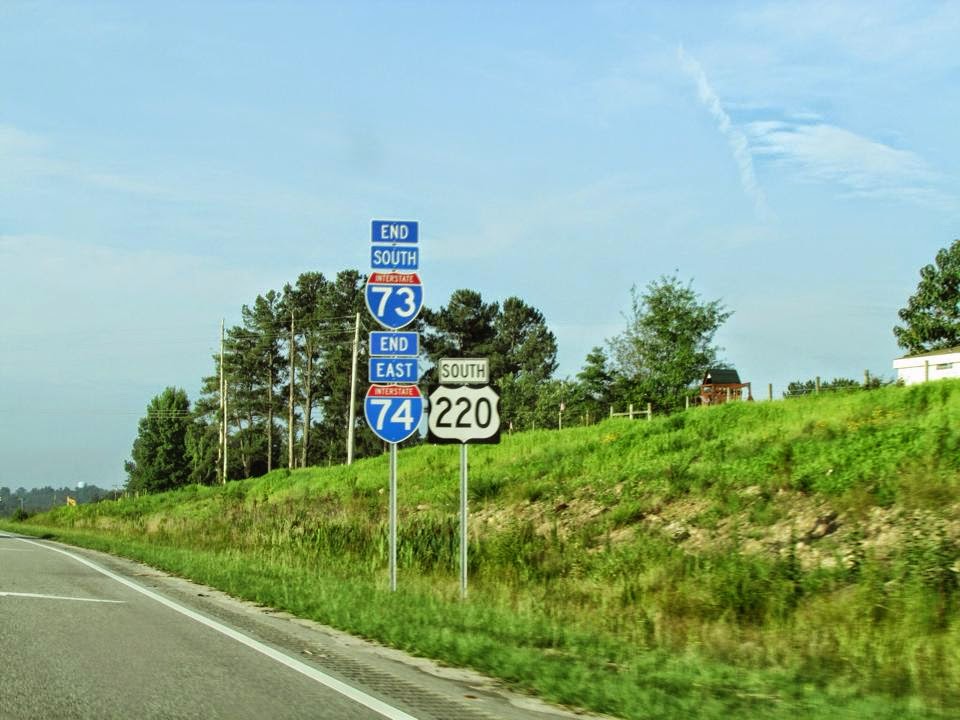 There were no projects completed for I-73 in 2014. There were, though, two new projects started at both ends of the current route. At the southern end, at the end of February, work started on the first project of 3 projects to build an I-73/I-74 bypass of Rockingham. The first phase is the $49.8 million upgrading of current US 220 from Exit 25 in Ellerbe 3.7 miles south to where the new Bypass will be built. As of the end of November, the project was about 20% complete, with an estimated completion date of October 2017. The next two projects were to start in 2019, however, under the new NCDOT process of determining which construction projects are to be financed over the next 10 years, starting in July 2015, the remainder of the Bypass did not receive high enough scores to be included. Therefore, at the current time, it does not appear construction to complete the Bypass will start until at least 2026.

At the northern end, work started in May on the $176.6 million project to extend I-73 from the PTI Airport interchange on Bryan Blvd. west to NC 68 then north 9.4 miles to US 220 near the Haw River. This is a design-build contract awarded to a joint venture of Flat Iron Contractors and Blythe Development Co., partially on the assurance the work could be completed by April 2017. As of the end of November, this project is about 15% complete. The northern end will tie into US 220 currently being upgraded to interstate standards north for about 4 miles from the Haw River to NC 68. This project has been ongoing since May 2012, and has fallen significantly behind, partly due to the decision by NCDOT to revise its plans for the northern interchange with NC 68 from one with traffic signals to one with a flyover ramp for I-73 South traffic. Despite it being, as of December 15, only 43% complete (vs. a projected 68%), the estimated completion date for the project is still listed as December 2016. Though I do not have any photos of these projects, you can view what the US 220 construction looked like back in April by accessing Google's Street View images starting at the construction of the future US 220/I-73 interchange. According to AARoads Forum member Strider, as of last week, drivers were now using the newly completed US 220 South flyover to cross over the future I-73 roadbed still under construction. He said most of the progress was at the southern end of the project.

B. I-74
Unlike I-73, I-74 saw the completion of a project in 2014 that extended it westward about 10 miles into Forsyth County, though this turned out to be the result of mistake communication. During the summer, new I-74 signs were put up along US 311 between High Point (Exit 65) and I-40 reflecting the approval of the route by the FHWA in the fall of 2013. Plus new overhead signs touting the new I-74/US 311 designation were put up along I-40, plus, temporarily before the overheads went up, a lone East I-74 trailblazer at the US 311 exit eastbound in June, photo courtesy of J. Austin Carter: 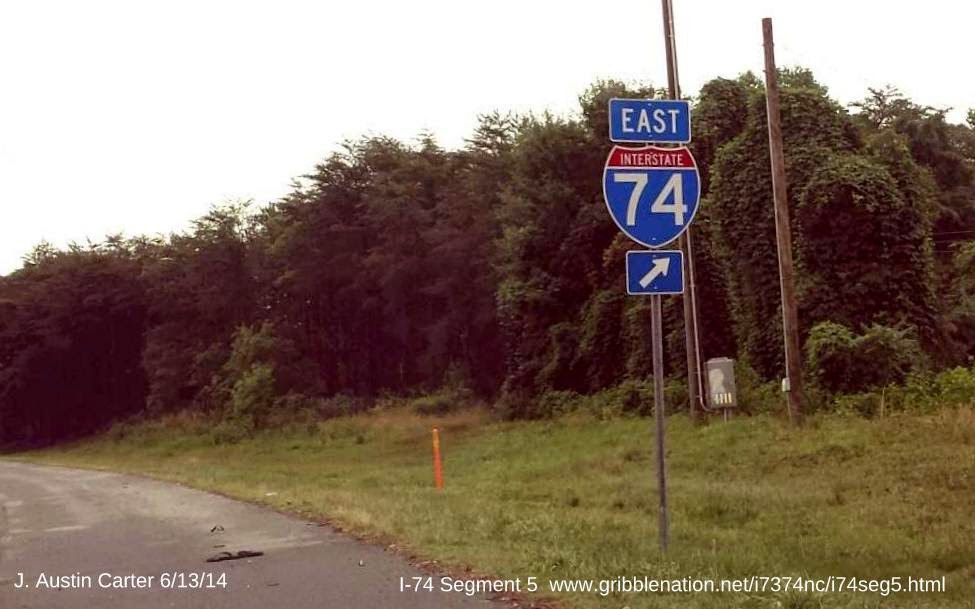 The signage upgrade was largely completed by August. A month later, the Winston-Salem news media reported the signing of I-74 was a mistake caused by a mix up between NCDOT and the FHWA over language in the correspondence between the two agencies as to whether the US 311 freeway was up to interstate standards. Even though US 311 was substandard and shouldn't have been allowed to be signed as I-74, the FHWA admitted it made the mistake, and so the I-74 signage could remain, though NCDOT had to promise to upgrade the freeway to interstate standards in the future.

The other major news surrounding I-74 in 2014 was the start of construction on the long planned, and long delayed, Winston-Salem Northern Beltway. Not only did construction start on the first segment, 4 miles from Business 40/US 421/NC 150 to US 158, in December, with a total cost of $154 million, to be completed in April 2019, but NCDOT approved moneys from three other segments that will extend I-74 from the US 311 freeway across I-40 and northwest to US 311 /Walkertown Road by 2025. Here's some of the planned signage for the Beltway on Business 40: 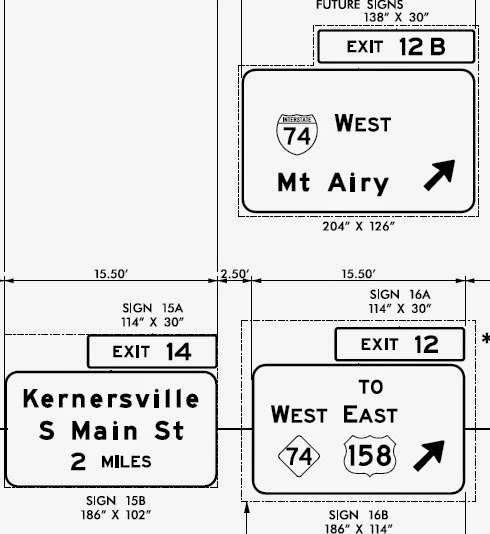 As can be seen, NCDOT will sign the Loop as NC 74 until the Loop at least ties into the existing I-74/US 311 freeway. Here's some signage plans for the Loop itself: 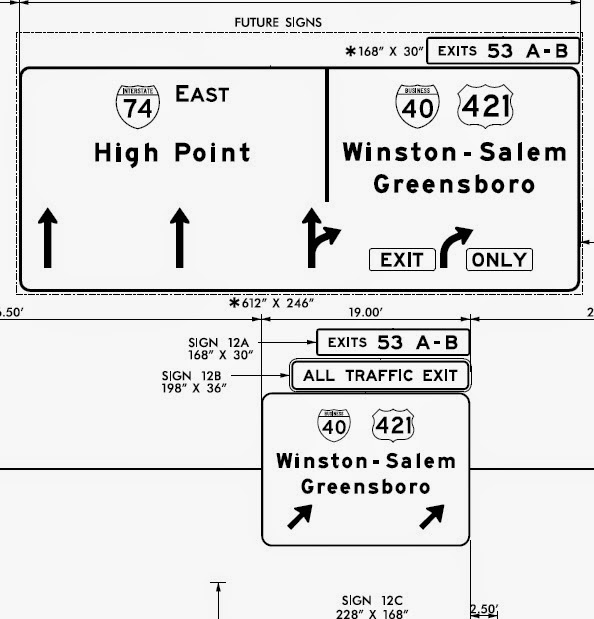 Again, future signage on top is for when the Loop is completed back to I-74/US 311. As for the remaining segments needed to take I-74 to US 52, these are not funded at this time, and so construction cannot start until after 2025. The other I-74 project under construction is the Rockingham Bypass discussed earlier.

C. What's Ahead for 2015
Next year will be the first in several years which will see no I-73 or I-74 project starts or completions. The Draft STIP with the projects funded and not funded discussed above is due out in final form in July. There, perhaps, may be changes in the fortunes of some of the unfunded projects. NCDOT has a feasibility study underway on whether to upgrade US 74 between the current end of I-74 at NC 41 near Lumberton to the US 74-76 Bypass Freeway around Whiteville. Also, they are studying, at the behest of officials in Charlotte and cities further western along the US 74 corridor, the feasibility of upgrading all of US 74 east of I-26 to Wilmington to interstate standards. If either of these projects get a green light, there may be more resources available to complete some of the I-73 and I-74 projects in the southeastern part of the state in the years ahead.

I will post any news and updates to my I-73/I-74 in NC Progress page, and, perhaps, I will be able to take a trip down to North Carolina to check things out in person. As always, feel free to forward any photos or news you may hear to me, it's greatly appreciated.

Chris Miller said…
thanks for the update!
11:07 AM

kdub1 said…
I've thought that for the longest time that NCDOT should have placed "Temporary 74" shields on the stretch of 311/40/52 between each end of the Northern Beltway like it did with 85 until the Interstate could be built between Exits 87 & 118.
10:42 PM