September I-93 Signage Update (Plus a Mass. Route Signage Mystery)

By Bob Malme September 08, 2013
Got my first chance in nearly a month to check out progress in the sign update project going on along I-93 from Boston south. There are some new things to report, especially if you are a fan of overhead sign supports. If you are a fan of overhead signage itself, not so much. However, you may now have something to look forward to in the not so distant future. 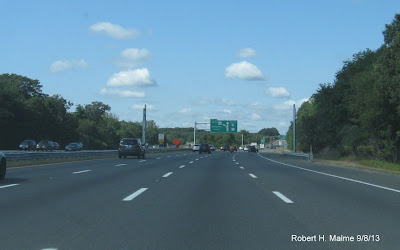 Between these overheads and those at the interchange itself is the future left-hand support for the MA 24 interchange, Exit 4: 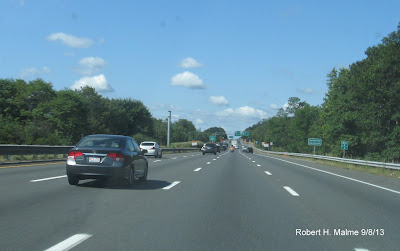 The new sign is right over the Randolph town line. Apparently, there are no plans for an additional 2-mile advance sign for MA 24 in this direction. The supports at the MA 28 exit itself are awaiting their new signs as well behind the existing overheads: 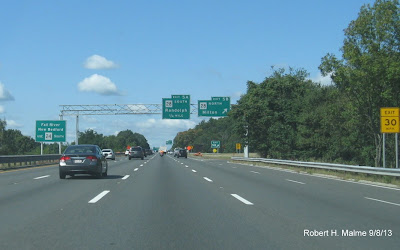 The MA 24 sign support installation appears complete as well. Here are the posts for the new overhead immediately following the on-ramp from MA 28 South: 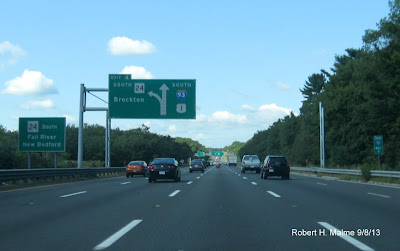 While the installed pair of posts at the MA 24 interchange await their signs as well: 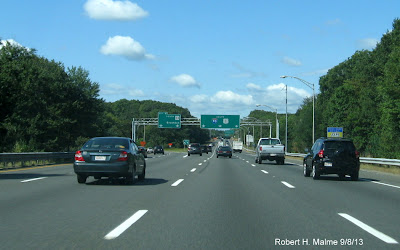 There has been no activity seen to replace the first advance sign for the next exit on I-93 South (Ponkapaug Rd), however this is probably under the domain of the I-93 Add-A-Lane contractors than the folks responsible for sign replacements down to Exit 4.

B. I-93/US 1 Northbound between MA 24 and MA 3
Speaking of the Add-A-Lane project, it appears final paving is taking place along I-93 from MA 24 to I-95. The additional lane project northbound from the I-95 North ramp to the MA 138 interchange, also appear to be closer to completion as well. Here's what the area looked like this morning: 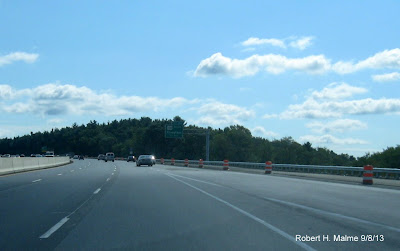 Heading back towards Braintree, the first exit sign for MA 28 still does not have a sign support for its foundation, however, the second one after the MA 24 South off-ramp, for the new 1/2 mile advance for MA 28 South, does: 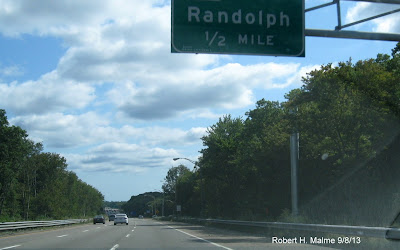 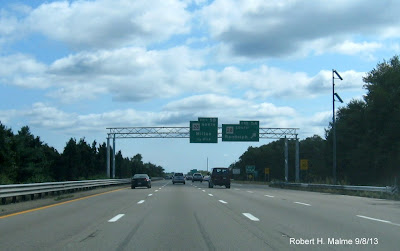 They still need a new support for the future MA 28 North right-side cantilever at the off-ramp beyond signs seen above. As for the rest of the '128' portion of I-93 North, it appears set with new left-hand supports having all been placed for the MA 3 South, Exit 7, interchange. Here is the first one before the MA 37 off-ramp, Exit 6: 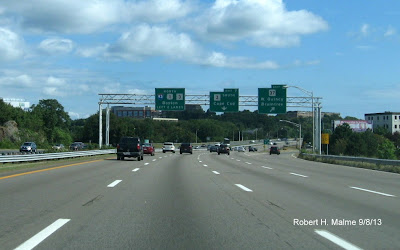 The new supports being behind the existing signage. Here's the posts for the 1/2 mile advance overheads approaching Exit 7: 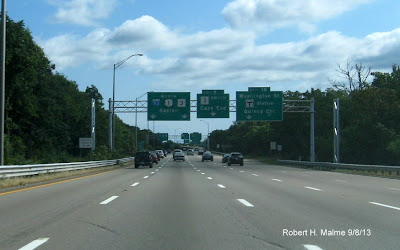 These supports are in front of the existing signs. Finally, here are those at the 'split' itself: 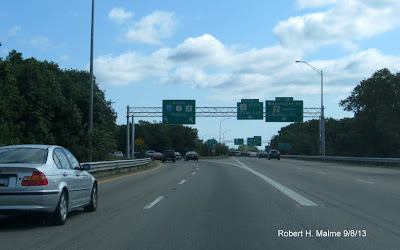 The right-hand one partially hidden by the light pole. There is also an updated photo of the future signage for Exit 8 before I-93/US 1 merges with MA 3. The post now has been attached to the new foundation, behind the exiting sign, and just over the Quincy city line: 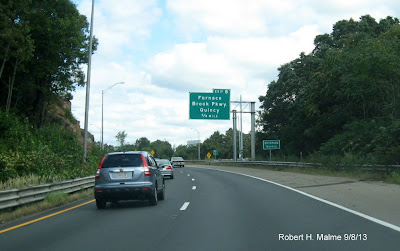 C. Southeast Expressway Portion
There is some progress to report here too. One new sign support and some new foundations have been set. Here's the first new support for this section of I-93. For the future new HOV lane restriction sign, on the left: 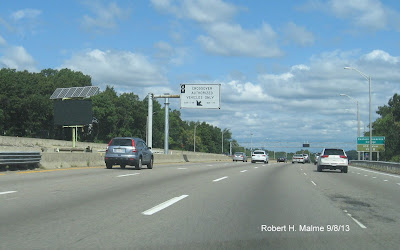 I spotted at least 3 new foundations which have been poured southbound between Exits 11 and 8. The best photo I could get of one of them southbound in Milton is below: 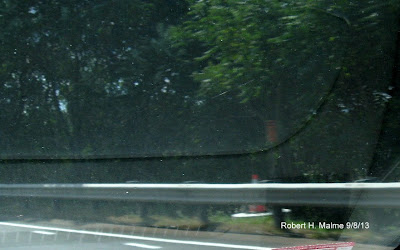 Meanwhile, they have continued to replace more of the Exit Gore Signage. Here's the New Exit 11 sign heading northbound in Milton: 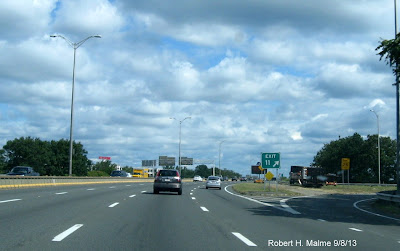 While only one new one has been placed, for Exit 11A, headed south: 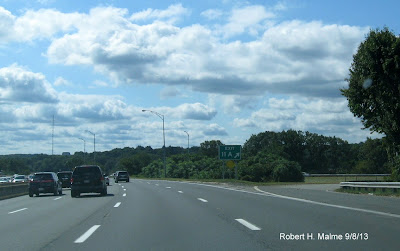 The I-93 reassurance marker placed without a banner beyond Exit 11 Southbound is still there. It has not been joined by any other new route shields either north or south. Hopefully, there will be more progress to report along this stretch in the next month or so,

D. MA 2A Sign 'Mystery'
And now for something somewhat slightly different...
For those not on AARoads Forum, about a month ago there was a big water main break near the intersection of Tremont St and Mass Ave in Boston's South End. Seen in many of the media videos, or photos from the scene, were at least a couple MA 2A shields on Tremont approaching Mass Ave from the north. MA 2A does run along Mass Ave from Arlington through Cambridge into Boston where its official eastern terminus has been at MA 2/Commonwealth Ave. These signs though were about 1/2 mile further east down Mass Ave. When I posted links to these photos/videos and thoughts whether this meant 2A had been extended, and what this might mean for MA 2 as well, to online forums, most respondents thought this was simply a mistake. Searches of the MassDOT Road Inventory, Google Maps, and other sources showed no evidence of an extended MA 2A.

I finally was able to take a long enough lunch break from my job in Boston to walk Mass Ave between Tremont St and just north of Huntington Ave (MA 9) last Thursday. Evidence I've gathered is mixed as to whether the mistake hypothesis can be confirmed. Here is a closeup of the shields first spotted in the news reports: 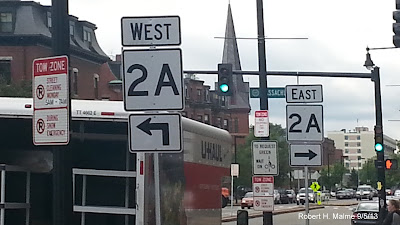 These signs appear to be quite legitimate with one big flaw, however. The directional banners are wrong. This is looking south along Tremont toward Mass Ave. To go west to Cambridge one would need to turn right onto 'East' MA 2A. To head east toward I-93 and Melnea Cass Blvd, you would turn left onto 'West' MA 2A.

There are many more MA 2A signs in the area suggesting legitimacy. Both on Columbus Ave (MA 28) approaching Mass Ave, one block to the west and at least three reassurance markers along Mass Ave, like this one beyond Columbus Ave heading west: 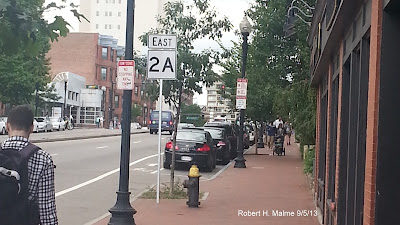 But again, the directional banner is wrong. As it is a few blocks further west up Mass Ave near the Christian Science Plaza: 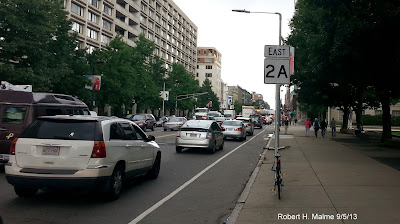 Not that there are no West MA 2A signs, they just appear heading eastbound on Mass Ave, like here after Tremont St: 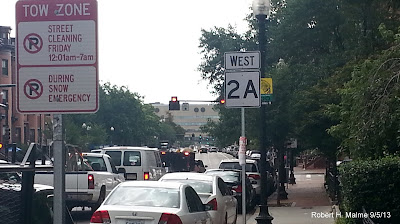 So massive MassDOT or contractor error or legitimate signage that is just headed in the wrong direction? I have e-mailed the Starts & Stops blogger at the Boston Globe with this question. Perhaps an answer will come soon. If not an error, what is the new eastern terminus for MA 2A, and what, if any, changes does this mean for its parent, MA 2?

Rich said…
I agree with you. These backwards 2A signs drive me crazy. There are also signs in that neighborhood which make mistakes for route 28 (for example, indicating "West 28"). Also, in Neponset Circle, there is now a sign indicating "To 203 Gallivan Blvd." That is route 203 & the sign should read "203 West."
12:47 AM