I-93 Signage, South of Boston Update

By Bob Malme November 12, 2012
Had a chance this past weekend to drive the southern end of I-93 from Braintree to Canton and back. With the opening of the new fourth lane northbound between I-95 and MA 24 on Wednesday (11/14), this portion of the '128-Add-a-Lane' project is almost complete. (For a list of upcoming opening dates for '128 South' between MA 109 and MA 24, see this blog post, a response to a question I had after taking this road trip). The signage along this stretch of I-93 has now, with an exception or two, been completely replaced.

1. New signage southbound from MA 24 to I-95
Two of the final signs to go in southbound have been the advance overhead signs for Exit 3, Houghton's Pond. Signs 1/2 mile before the exit have been placed both on the MA 24 on-ramp and here, along I-93: 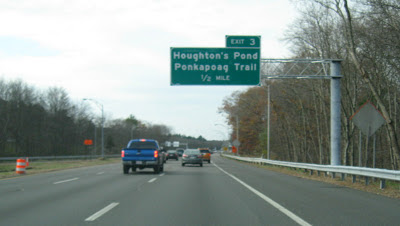 One of the signs not updated yet is the 1 mile advance sign, which may not be the responsibility of this project. After the MA 24 ramp merge they have added a pair of I-93/US 1 reassurance markers on each side of the highway. Here's the assembly along the right side: 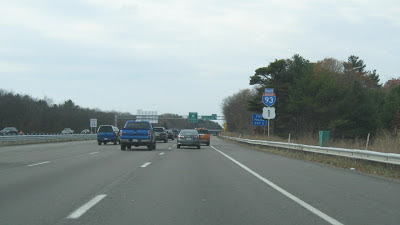 The only other new sign on I-93 South since my last trip was an 'End I-93' sign after the MA 138 exit, I spotted it too late to get a photo this time. Though technically a sign for I-95, they have also put in a new center posted overhead for Exit 13 just before the merge with I-95 North: 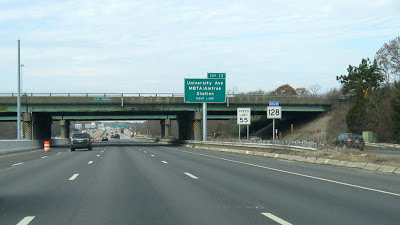 This replaced two separate signs for the exit that were placed on the bridge above both the mainline and the off-ramp, you may also notice a new 'Begin MA 128' sign assembly. Guess they didn't have any MA state Begin banners, or, as some people suggest, they are preparing for Interstate 128.

2. New signage northbound
The final signs northbound appear to be in place (with the possible exception of another Exit 2 assembly at the on-ramp from I-95 North). Here's a look at the new Exit signage and a new 'Begin I-93' assembly: 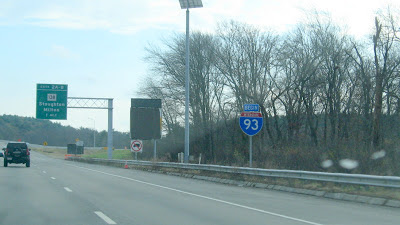 The covered sign was an indicator on whether the breakdown lane was open for travel. I assume it will be removed after the new 4th lane opens this week. There is still some remaining construction at the I-95 on-ramp: 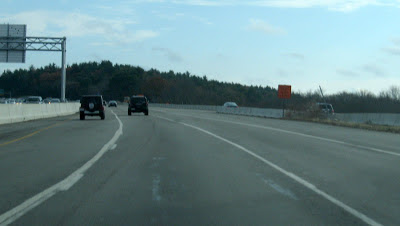 The concrete barriers are for continued construction of a 5th travel lane from I-95 to MA 138. This may, or may not open at the same time as the 4th lane. The first North I-93/US 1 reassurance marker is currently also being protected behind the barrier: 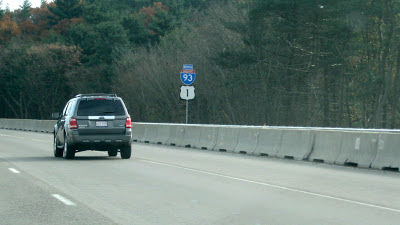 The last two new overhead signs in this direction have to do with current Exit 4, MA 24: 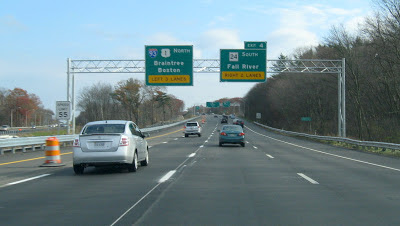 These new signs forgo a diagrammatic display or arrows for text, the left 3 lanes currently restricted to two. There's also a new separate auxiliary surface sign after the Exit 3 on-ramp that lists MA 24 also goes to Brockton and New Bedford. The final new signage at the off-ramp is a little different: 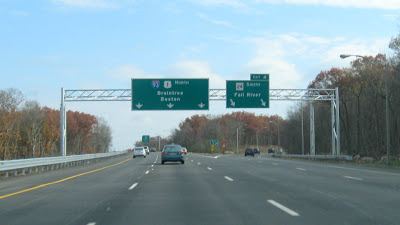 Here the arrows return. The roadway between the MA 24 on and off-ramps will soon be the only 3-lane stretch of  '128' south of I-93 in Reading.

3. Notes on the I-93 Signage Project, Randolph to Boston
There has been continued slow progress on this contract. The latest MassDOT listing says the project is now 7% complete as of the end of October. There are new Series 'E' aka blue signage for services running from before the MA 28 exit northbound to MA 37. A couple of these, however, were already replaced before the original contract was stopped in 2009 and re-advertised. I did not notice any new 'green' signage, either on the mainline or at the interchanges. Hopefully, 2013 will see more rapid progress on sign replacement, both along the '128' stretch and the Southeast Expressway.