By Bob Malme February 22, 2012
Hoping not to bring winter back, and hoping spring stays around, I took a trip over to find some new walking shoes for the season. Decided to do a little roadgeeking along the way by checking out progress on the widening of I-93 between MA 24 and its terminus at I-95. Along the way I took a photo of this unique MA (or is it NJ?) sign assembly: 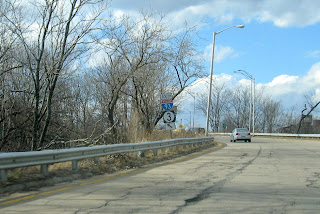 Since this portion of I-93 is to undergo a sign update project soon, thought it may be the last time I may get to take a photo (hey, it's only been up for 10-20 years). This is at the Furnace Brook Parkway (Exit 8) interchange in Quincy. Heading toward the northbound on-ramp is a newer sign: 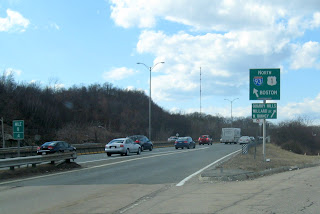 This sign was put in as a replacement in the past year for the previous North I-93/MA 3 Mass. Green Sign that was knocked down. Though not part of the sign replacement project, can I say it is a 'sign' of things to come(?) as this should be the typical signage at on-ramps along the section of I-93 south of Boston. MA 3 signs may appear on the roadway itself and tacked on to sign supports at major interchanges. Speaking of signs, there is now a new diagrammatic sign for the I-95 interchange on I-93/US 1 South: 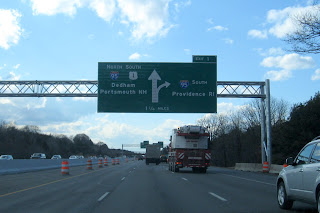 Notice the space for a letter next to '1' on the right-side exit tab. Notice also that, unlike the opposite-directions signs along I-95/US 3 in Burlington where there are no control cities listed, and the new signs for I-93/US 1 North the other way that only list Boston, this has two destinations listed, and hopefully no one confused as to why US 1 South goes to Portsmouth, NH. They are preparing two put up more overhead signs between MA 138 and the I-95 South on- ramp. These can be seen heading the opposite direction at the beginning of I-93 North: 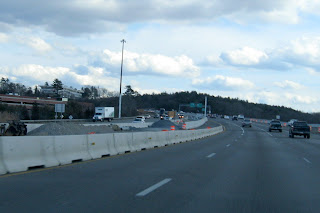 Seen in the distance is one of the 2 remaining old overhead sign assemblies between I-95 and MA 24. They are making progress in replacing the other one at the MA 138 interchange: 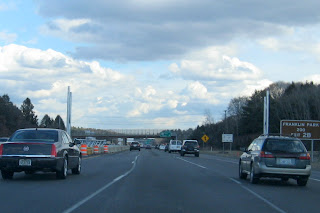 Meanwhile, the last new sign for Exit 3 Northbound has been put up using the support for the new I-95 sign seen above: 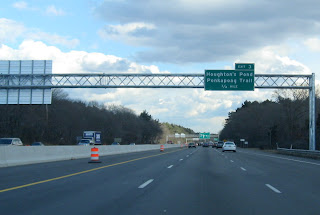 The widening has been completed along this stretch, as can be seen approaching the MA 24 interchange: 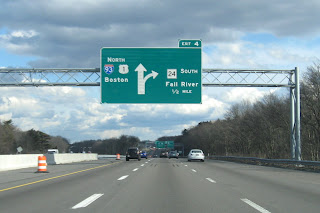 Don't know if they plan to replace the next two overheads, the four-lane roadway comes to an end at the exit: 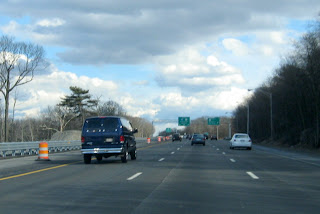 Apparently between the on and off-ramps from MA 24 the road will remain 3 lanes in both directions. The only part of '128' south of I-93 in Woburn that will have not have 4 lanes.

Status of I-93 signing projects: As of last Wednesday, 2/15, the two projects north of Boston were still scheduled to end this July. This despite the contract for I-93 from MA 129 (Exit 38) to the NH border only being 35% complete, and the section south of 129 to MA 28/38 (Exit 29) in Somerville being 50% complete. Both contractors are still pouring the foundations for the new overhead sign supports. The project south of Boston, as seen above, shows little, if any work so far. But, it's only been an 'active' contract for about 6 months. The contractors have until March 2014 to complete the work and it appears they are taking their time. More posts as new signs warrant.