By Bob Malme September 06, 2010
With others in the blog crew busy, or away for Labor Day, I decided to see what progress has been made on the Durham section of the Triangle Expressway, the Triangle Parkway since July. I'll wait for when others from the Wake County contingent are interested to explore progress on the part to the south, the Western Wake Freeway. The tour starts from the northern end of the parkway at I-40 and works down to the end at NC 540. The following of note was seen: 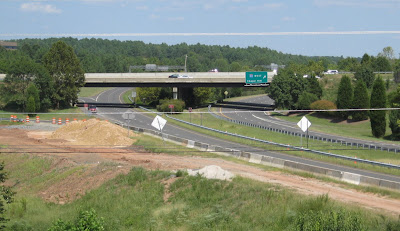 Some progress has been made in building a more high-speed off ramp from I-40 East. The ramp roadbed continues along the jersey barrier to the south, which I assume will become a merging third lane. Notice the I-40 overhead exit sign. It is one of the new 'highly reflective', needs no lighting, signs that have gone up along the Durham Freeway. The new sign, however, does not have an exit number.

2. NC 54 Bridge
From the previous visit, the impression of the construction was that it was simply going to be a slight movement of the existing bridge to the north. The latest photos, though: 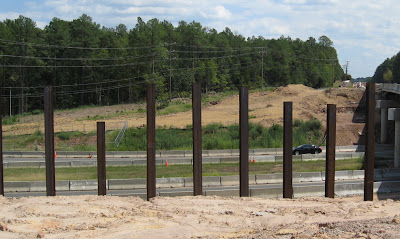 Imply a totally new bridge to the north, possible using some of the existing bridge. Support girders seen above are similar to those at other permanent bridges. Clearing of the other side of the highway is proceeding, so support structures can be placed there as well. The photo below: 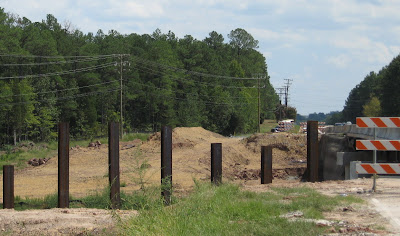 Shows how the new bridge may tie in to the old one. Perhaps this is being done so the existing freeway can be slightly re-aligned to the south of the bridge to better join the new parkway.

3. The New Parkway Connection
More progress has been made on the connection from the existing NC 147 to the new parkway as seen in this view from NC 54: 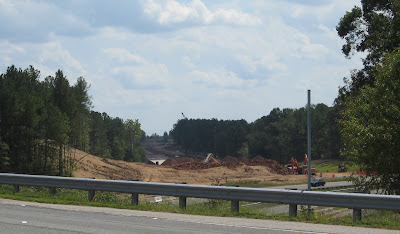 From this view one can see how the route of the Parkway curves around the EPA's property to the right of the Parkway on the way toward Hopson Road. This is the view from 147 South: 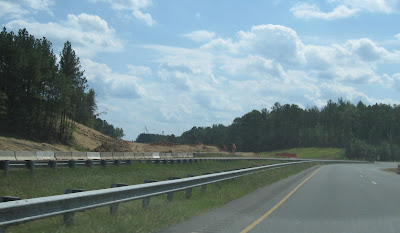 There are no signs that the closing of the connection to Alexander Drive will happen in the immediate future.

4. Hopson Road Bridge/Interchange
More clearing has been completed in this area, but no bridge construction has started, as can be seen in this view approaching the site from the west: 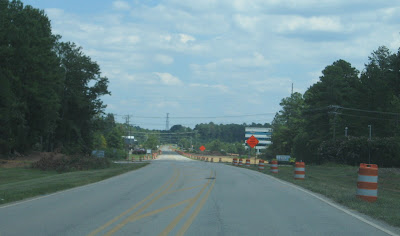 Looking south one can see the other end of the interchange area at Davis Drive and beyond: 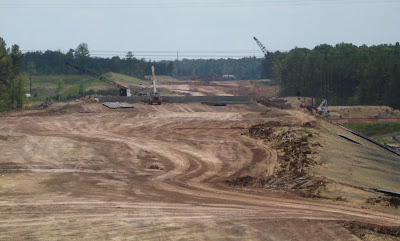 You are looking down the Parkway mainline. The cranes in the distance are working on the Davis Drive bridge (more details below), to the middle right you can also see bridge construction for the southbound C/D ramp that will run between Hopson and Davis. Looking to the north: 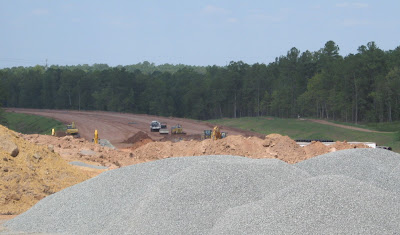 One can see great progress on the road bed beyond the bridge, but that they are still in the first phases of constructing the north side of the bridge itself. They may also still have to deal with utility lines to the south of Hopson Road: 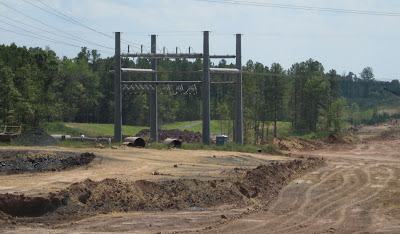 There's also unfortunate news for our favorite place to park to observe progress here, looks like the temporary relocation of Hopson Road will be cutting through 'our' parking lot: 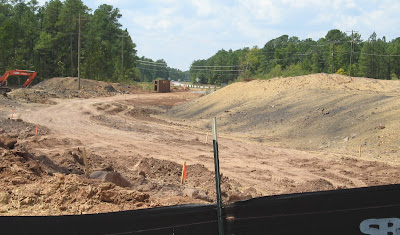 Looking West, with Hopson Road seen below the utility wires. The remote lot is behind the black plastic, the road appears it will use the lot to make it back to Hopson before the building's main parking lot driveway.

5. Davis Drive Bridge and Interchange
The most complete bridge construction on the Parkway can be seen at Davis Drive: 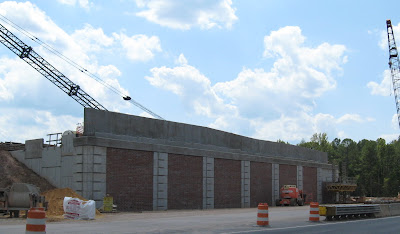 This is to the south of the road, note the 'extras' in the bridge supporting structure, it will include bricks as well as fancy pre-cast cement pieces. They haven't quite finished the brickwork: 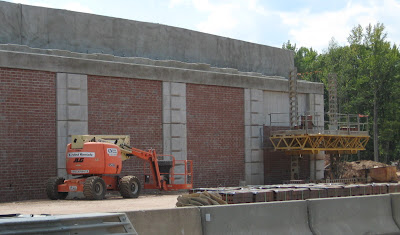 Having completed about 2/3 of the work on the far right of the bridge. As a comparison: 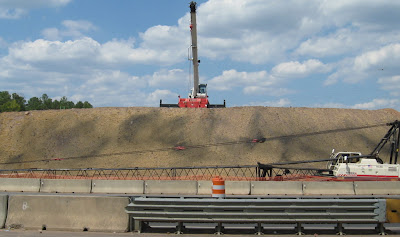 The view across Davis is disappointing, with only the bridge landscape work completed. They are also though working on the bridge for the southbound C/D lanes to cross Davis west of the main bridge: 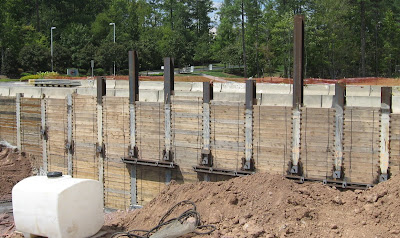 It will be smaller, but I assume will have the same alternating cement and brick design. Since there was a truck ramp to the top of the bridge, I decided to climb it to see the view: 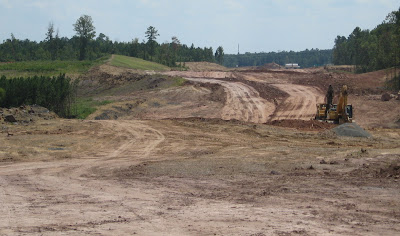 The view to the south takes you almost to Kit Creek Parkway, or what's left of it.
While the view north of the back of the bridge structure is not as interesting as the front: 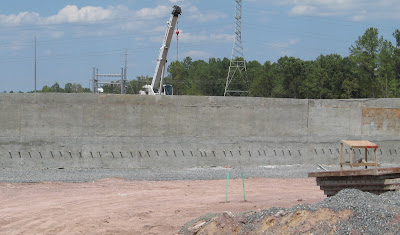 7. Kit Creek Parkway Bridge and NC 540 Interchange
As RTP travelers know, the Davis Drive exit from NC 540 was closed at the start of Parkway construction. There were two reasons, the need to extend Kit Creek Parkway across the Triangle Parkway via a new bridge and to recreate the existing Davis Drive interchange into the start of the Triangle Parkway. Here's a view of progress so far on the Kit Creek Bridge: 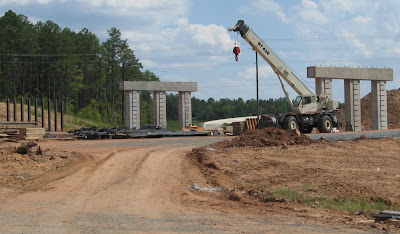 As can be seen, two of the three support structures for the bridge have received their concrete coverings. Here's a view of progress on the bridge structure to the west: 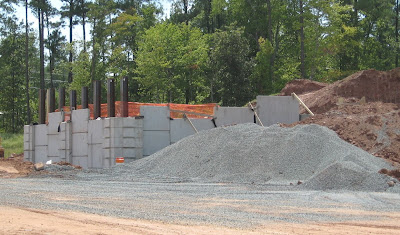 The metal girders have been installed, but not all the precast cement structures have been placed, several are piled up in the construction area: 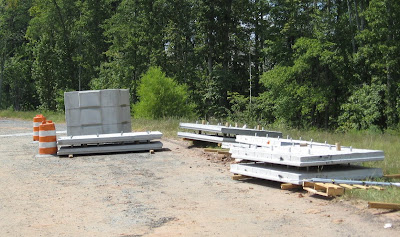 As for Kit Creek Parkway, it will be put on a new alignment to the south of the existing road to take it over the bridge: 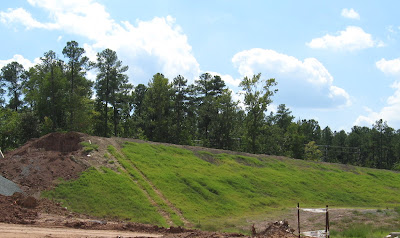 It appears the road will be narrower than the existing road, with perhaps separate entrances to the company to the right: 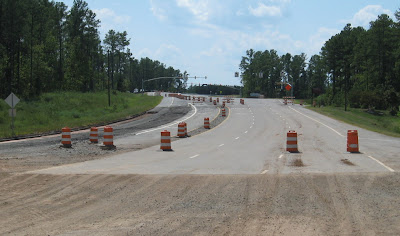 The view to the north of the future bridge back toward Davis Drive shows progress on grading and an impressive collection of large earth moving equipment: 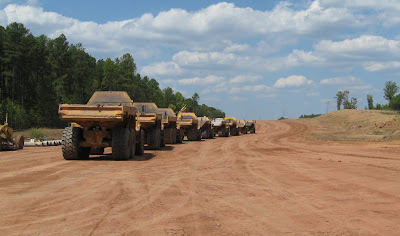 As for the NC 540 interchange. The photo below is looking south on the Parkway in the direction of NC 540, which cannot be seen due to a sloping hill and piles of construction materials: 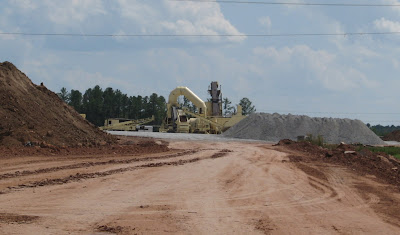 They appear to be starting to work on connecting the new Parkway to the existing 'Davis Drive' ramp from NC 540. It appears the roadway from the existing ramp will have to be moved slightly to the left to connect with the new roadway, the east supports of the Kit Creek Bridge are on the left: 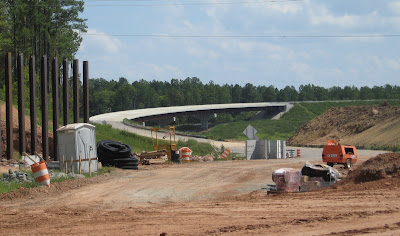 I hope to be able to take a longer road trip to view the Wake County portion of the Triangle Expressway sometime in September.