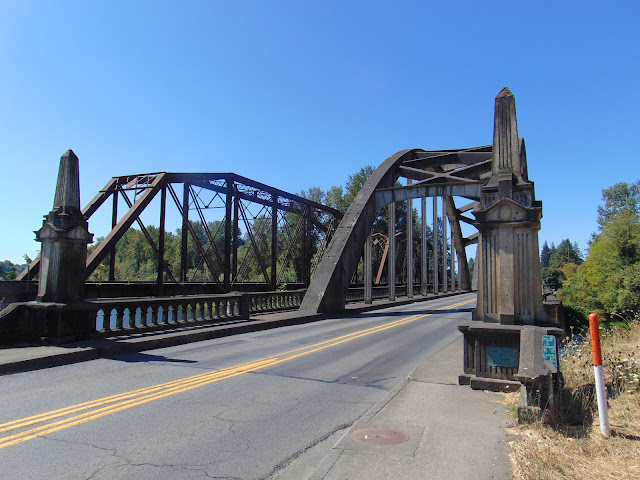 Along old US 99E (modern day OR 164) as it crosses the Santiam River in Jefferson, Oregon is the Jacob Conser Bridge. Designed by famed bridge engineer Conde McCullough and built in 1933 by Arthur Jordan and the Clackamas Construction Company, the Jacob Conser Bridge is the third crossing at this location. The bridge is 801 feet long and 24 feet wide, with 200 foot long spans. There is a railroad bridge paralleling the Jacob Conser Bridge just to the south, and there was an earlier bridge just to the north of the modern day bridge. The cost to build the bridge was about $100,000. The money for construction came from the United States government, granted by the Public Works Administration under the National Industrial Recovery Act of 1933.

The previous steel bridge over the Santiam River on the Pacific Highway was in rough shape. The old bridge was also damaged by two car accidents blamed on its width, a mere 16 feet. With trying to find a solution with the old bridge, Conde McCullough decided that rather than fixing the bridge, they would build a new bridge with more modern design elements. In 1932, they designed a concrete through-arch span as a replacement. The Clackamas Construction Company of Oregon City, Oregon was awarded the contract for construction, and in 1933 the new bridge was constructed.
You may be asking who was Jacob Conser and why is this bridge named for him. Conser was a native of Pennsylvania who emigrated to Oregon in 1848. Trained in millwork, Conser had built a millrace about two miles upstream from Jefferson, diverting river water to help build the town. Conser  established an important ferry crossing of the Santiam River. He was also involved in politics, as he served in the legislature for Linn and Marion Counties, and stood as Marion County commissioner from 1850 to 1853. He later became mayor of Jefferson, Oregon. Conser was also an incorporator of the Oregon Central Railroad Company in 1867 as well.
The Jacob Conser Bridge is an enduring symbol of his legacy and importance in the early development of this slice of the Pacific Northwest wonderland. Today, you can explore the bridge by foot or by car.