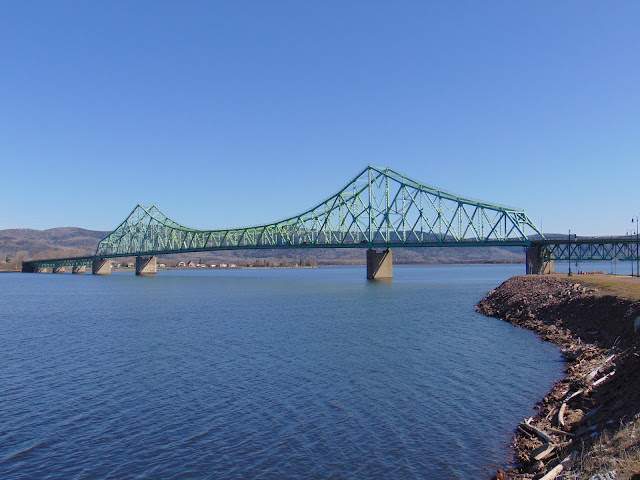 Serving as a vital link between northern New Brunswick and the Gaspe Peninsula of Quebec, the J.C. Van Horne Bridge is a cantilever through truss bridge. Crossing the Restigouche River between Campbellton, New Brunswick, and the communities of Listuguj and Pointe-à-la-Croix in Quebec, the bridge is 804 meters (2,637 feet) long. The bridge consists of 4 deck truss approach spans on each side of the bridge and joined in the middle by a significant cantilever through truss structure. The cantilever through truss structure provides a clear span over the navigational channel of the Restigouche River below. The bridge carries an average of 12,500 vehicles daily, but there are not many roads or bridges that cross between this area of Quebec and New Brunswick. The next closest crossing of the Restigouche River is at the Matapedia Interprovincial Bridge, about 12 miles or 20 kilometers to the west near where NB 11 crosses into Quebec to meet QC 132.

Built between 1958 and 1961 and named for a New Brunswick politician by the name of Joseph Charles Van Horne, the J.C. Van Horne Bridge replaced a ferry service that ran across the Restigouche River between Campbellton and Pointe-à-la-Croix. The first ferry service between the two communities was established in 1855, taking passengers only. Later improvements to the ferry service allowed horses and buggies, and eventually, motorized vehicles, to cross. During the winters, the ferry was not in service, but there was an ice road in place across the Restigouche River to allow for crossing, with trees placed on either side of the ice road.

But by the 1950s, vehicular traffic began to increase for the ferry and a member of the Canadian Parliament representing New Brunswick, J.C. Van Horne, was tapped to make the case for a bridge to be constructed. Van Horne invited members of the federal and provincial governments to spend the day examining the traffic snarls and the length of time it took to get on a ferry. Van Horne selected July 26, 1957, for this day of observation, which happened to be the day of the St. Anne's Feast. People from all over the province came to attend the festival for the St. Anne's Day feast, so when the dignitaries arrived at the ferry crossing, there were long lines waiting at the slip. Legend has it that when the politicians asked "Is it always this busy"?,  Van Horne answered, "You should see it on Sundays"!

As a result of this visit, construction and funding for the J.C. Van Horne Bridge was authorized. The bridge was finally opened to traffic on October 15, 1961. Crossing back and forth between the provinces of New Brunswick and Quebec is much simpler and makes a world of difference for local residents and commerce. The bridge blends in well with the local scenery, I'd say. It's certainly a welcome sight in this otherwise quiet corner of eastern Canada and the North American continent.