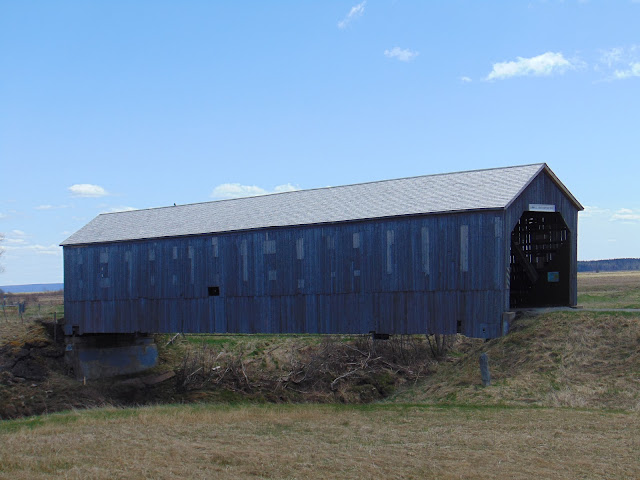 In my research, I've found two competing dates of the Sawmill Creek Covered Bridge, 1905 and 1908. But the bridge's history precedes either of those years. On October 4, 1869, the Saxby Gale was a powerful storm where the combined forces of wind and high tides destroyed homes and killed people and livestock along the Bay of Fundy in both New Brunswick and neighboring Nova Scotia. As a result of the Saxby Gale, the old bridge over Sawmill Creek fell apart.
The bridge was rebuilt as a covered bridge and was for years part of the highway now known as NB 114. Historical records point towards the current Sawmill Creek Covered Bridge to have been built in 1908 by A.E. Smye of Alma, New Brunswick. The contract for the bridge's construction was signed on September 25, 1907 for a sum of over $3,000 and construction went underway at once. The bridge was built quickly, as the flooring for the bridge was completed on New Year's Day 1908 and the bridge opened up for traffic. However, the roof of the covered bridge was not completed until the spring of 1908.
When a concrete bridge was planned to replace the covered bridge in 1975 to accommodate increased traffic and weight loads, Albert County Heritage Trust persuaded the government not to demolish the covered bridge. Instead, the bridge was saved and moved slightly downstream, allowing both the new parallel bridge and the covered bridge to peacefully coexist. Today, the bridge serves as a reminder of the history of Albert County. The Sawmill Creek Covered Bridge is part of the Trans-Canada Trail as well, allowing people to enjoy recreational activities across Canada. My visit to the bridge was in early May 2022, soon after repairs were made to the bridge in 2021.