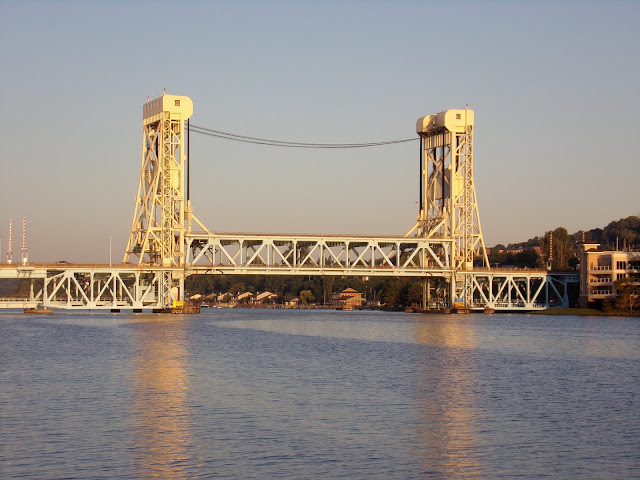 During my visit to the Upper Peninsula of Michigan, I had the opportunity to see the Portage Lake Lift Bridge, or the Houghton-Hancock Bridge as it is officially known. The Portage Lake Lift Bridge is the world's heaviest vertical lift bridge and carries the highways US 41 and M-26 across the bridge. The bridge connects the cities of Houghton and Hancock over the Portage Lake section of the Keweenaw Waterway, but more broadly, it is the one bridge that connects the communities of the beautiful Keweenaw Peninsula with the rest of the Midwest.

Replacing a swing bridge that was built in 1905, the 1,310 foot long Portage Lake Lift Bridge opened to automobile traffic at the tail end of 1959 and was not officially completed until 1960. When the bridge was officially completed and dedicated, it was with much fanfare, but with some technical difficulties as well. While there were marching bands and jets that flew overhead during the grand opening, but telephone service was cut the day before to over 1000 customers in Hancock due to a ship having dropped anchor on underwater telephone cables a quarter mile away from the bridge the night before.

The vertical lift bridge generally works as intended with little problems, but in 1989, a wedding party  was trapped atop the lift span. A former bridge operator and his new bride decided to get married on the raised bridge, but a broken hydraulic line stranded them there for a few hours. Talk about a way to start a marriage.

The bridge design had to accommodate automobile traffic, but railroad and ship traffic also had to be considered, due to its proximity to both Lake Superior and nearby copper mines. As a result, the vertical lift design was deemed the most appropriate design for this bridge. Suspended between two towers, the entire main span of the bridge can rise vertically between them to provide 100 feet of clearance for ships. As long as the towers were built high enough, a vertical lift bridge accommodates just about any size ship that needs to pass beneath it. From the beginning, bridge planners stressed the importance on minimizing interruption of traffic flow across the bridge. That problem was solved by designing a railroad deck that could also accommodate motor vehicles. When raised to the highway level, the railroad deck allowed automobile traffic to continue across the bridge while small and medium sized boat traffic passed underneath, thus adequately addressing the traffic flow issue.

While the last train crossed the Portage Lake Lift Bridge in the summer of 1982, which officially ended over one hundred years of railroad service across the channel, the double deck design is still used in various ways. The vertical lift span sits in its intermediate level during the spring, summer and fall months, allowing small and medium boat access to either side of the bridge. As a result, automobile traffic crosses on the railroad deck. In the winter, the bridge is lowered and made accessible to snowmobiles and skiers, while automobiles cross on the upper deck. This is great for the snowmobile riders and cross country skiers, especially considering the heavy lake effect snow that the Keweenaw Peninsula receives each winter. Big freighters do pass under the bridge, but rarely do they three or four a year. That number has slowly declined over the years, considering that during the first three days of November 1961, 22 bulk carriers went through the lift bridge.

Today, the Portage Lake Lift Bridge is a centerpiece between the two communities of Houghton and Hancock, as well as the Keweenaw Peninsula at large. With the downtowns of the two cities being so close, the bridge is a lifeline for the people who live, work and visit the area. I think that it makes for a nice scenic view of the Keweenaw Waterway and I look forward to the opportunity to cross that bridge again someday.