By Doug August 05, 2019
When someone thinks of incline railways, you might think of a place like Pittsburgh, Pennsylvania, Johnstown, Pennsylvania or Chattanooga, Tennessee. A bluff in Dubuque, Iowa may not be the first place you think of finding an incline railway, but that is where you will find the Fenelon Place Elevator Company's incline railway. 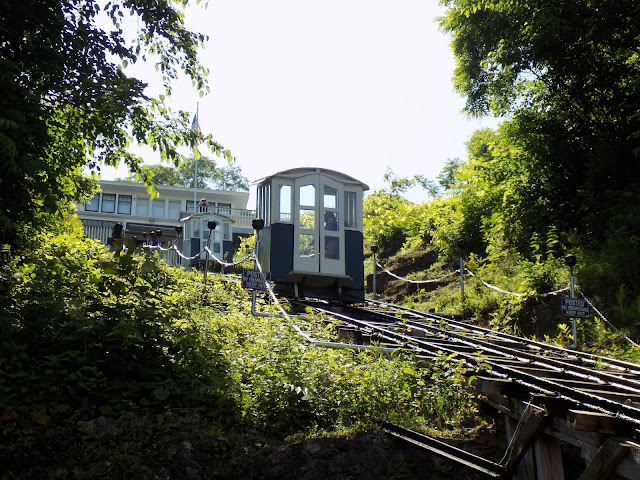 The Fenelon Place Elevator is described as the world’s shortest, steepest scenic railway. It is 296 feet in length and elevates passengers 189 feet from Fourth Street near downtown Dubuque up the hill to Fenelon Place. At the top, you will find a magnificent view of the business district in historic Dubuque, fantastic bridges and the Mississippi River along with views of the Driftless Area of neighboring Illinois and Wisconsin.

The story of how the Fenelon Place Elevator came to be is an ode to the famous meme where Dave Chappelle implies that modern problems require modern solutions, except the beginnings of the Fenelon Place Elevator goes back to 1882. At that time, everything shut down at noon in Dubuque for an hour and a half while everyone went home to dinner. Mr. J.K. Graves, a former mayor and former State Senator, also promoter of mines and a banker, lived on top of the bluffs and worked at the bottom of the bluffs in town. However, because of where the bluffs were located in town, he had to spend half an hour driving his horse and buggy to get to the top of the bluff to his home and another half an hour to return downtown, even though his bank was only two and a half blocks away from home. J.K. Graves liked to take half an hour for his dinner, then a half an hour nap before going back to work, but this was impossible because of the long buggy ride.

Based on the travels Graves had taken around Europe, he had seen incline railways in use and decided that a cable car would solve his problem. He petitioned the city for the right to build an incline railway and the franchise was granted on June 5, 1882. John Bell, a local engineer, was hired to design and to build a one car cable modeled after those in the Alps. The original cable car, which was built for Graves’ private use, consisted of a plain wood building that housed a coal-fired steam engine boiler and winch. A wooden Swiss style car was hauled up and down on two rails by a hemp rope. J.K. Graves’ cable car operated for the first time on July 25, 1882. After that, he had his gardener let him down the bluff in the morning, bring him back up the bluff at noon, back down after dinner and nap, and back up again at the end of the work day. Before long, neighbors began meeting him at the elevator asking for rides up and down the bluff.

As a result, ten neighbors banded together and formed the Fenelon Place Elevator Company. Mr. Graves gave them the franchise for the right of way for the track. This group of neighbors traveled to the 1893 Columbian Exposition in Chicago, Illinois, to look for new ideas on how to operate the incline railway. They brought back a streetcar motor to run the elevator, a turnstile, and a steel cable for the cars. They had remembered that each time the elevator house burned, the fire also burned through the hemp rope that held the car and sent it crashing down the hill destroying it and the little house at the bottom. Trying to assure that didn't happen, they switched to a modern steel cable to bring the cars up and down the hill. Then, they installed three rails with a fourth bypass in the middle to allow for the operation of two funicular, or counterbalanced cars.

By 1912, C.B. Trewin, who had built a house next door in 1897, became the sole stockholder of the Fenelon Place Elevation Company, as he had bought up the stock from the original ten stockholders since they either passed away or moved on. Mr. Trewin modernized the incline railway, by adding garages to the north and south sides of the operator’s house in 1916. He also added a second floor apartment, which the neighborhood men used for a meeting room where they could smoke and play cards without the wives interfering.

There was another fire in 1962. That time around, it was an electrical fire between the ceiling of the operator’s room and the apartment upstairs that brought the realization that the price had to go up. which it did to ten cents a ride. Even in 2019, riding the Fenelon Place Elevator is a nice bargain at a $1.50 ride each way. The cable cars today fit eight passengers, and as one car goes up, the other goes down the hill at the same time. At the top, there is a viewing area where you can see the Julien Dubuque Bridge, Dubuque's golden domed courthouse, a riverboat and possibly even the famed Dubuque Shot Tower.