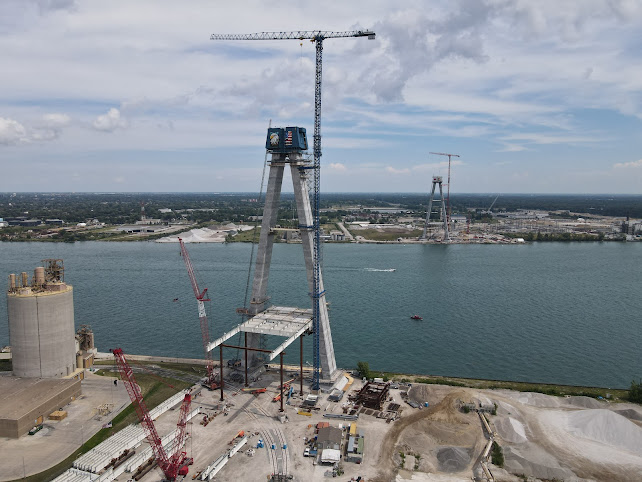 On the south side of Detroit, MI, a new engineering landmark is steadily rising from the ground that will take its place among the great North American engineering achievements of the last 100 years upon completion.

Under construction for the last couple years, the Gordie Howe International Bridge is a massive cable-stayed bridge intended to span the Detroit River between Detroit, MI, USA and Windsor, ON, Canada. It will become the largest such bridge in North America and the world upon its completion and will feature A-shaped pylons that will stand over 700 ft tall, plus a center span of about 2,800 ft. First proposed in 2004 as a means of supplementing the already-existing Detroit River crossings in the area (the Ambassador Bridge and Detroit-Windsor Tunnel), the project has gone through years of legal challenges and environmental review. The existing Ambassador Bridge carries approximately 25% of all commercial merchandise trade between the USA and Canada, and the need for a new crossing in the area to relieve the pressure on the bridge has been apparent for several decades.

Under the guidance and ownership of the Windsor-Detroit Bridge Authority, a joint venture contracting team was selected for the project in 2018. Titled “Bridging North America”, this team consists of world-renowned engineering and construction firms such as AECOM (lead design firm), Dragados, Fluor, and Aecon (not to be confused with the above "AECOM") (construction contracting companies). The more than $4 billion USD project got underway in 2019 with significant land clearing for the Ports of Entry and bridge approach roadways and is expected to open to traffic in late 2024. 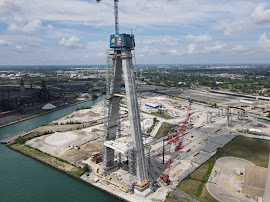 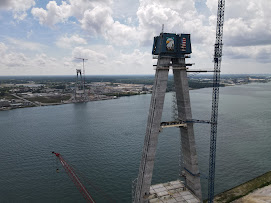 Above: The American tower of the new Gordie Howe International Bridge takes shape in these August 2022 aerial photos

Among the perks of this project are new and more modern Port of Entry facilities on both sides of the Detroit River, plus direct freeway-to-freeway access between Interstate 75 in Detroit and Highway 401 in Windsor. The existing crossings between the two countries currently rely on tedious local street connections in order to make the connection to the regional freeway networks on both sides of the border. By locating the new bridge where they have, officials on both sides of the border are aiming to increase the efficiency of this international crossing and remove excess commercial traffic from the local street grids of the two cities involved. Having said all of this, it is the strong opinion of the author of this article that both existing crossings should be kept open and maintained following the completion of the new bridge. The need for cross-border redundancy is necessary now more than ever, and the Ambassador Bridge especially is more than capable of serving admirably as a sort of “back-up” facility in the years ahead. (A recent deck replacement project was completed for this bridge in 2021 and the bridge is in otherwise very good condition.)

The new bridge being built here is named for long-time National Hockey League (NHL) star forward Gordie Howe, who’s illustrious Hall of Fame career included 25 years as a player for the local Detroit Red Wings. Howe led the Wings to four Stanley Cup championships during his tenure in Detroit and was a 23-time NHL All Star across a career that lasted an unequaled 32 seasons (interrupted by a brief retirement following the 1970-71 season). This, combined with his legendary career statistics and stature within North American professional hockey, earned him the nickname of “Mr. Hockey” throughout the continent. It is perhaps only fitting that a bridge of such towering dimensions be named for such a towering figure in his sport on both sides of the border.

As a civil engineer who has worked on large-scale bridge projects over the course of his career, this project in Detroit is one I’ve taken a strong interest in ever since its proposal and contract award. It’s a project that will be continued to be followed in the Dan household over the coming years and its one I look forward to see completed in due course. The following pictures of the construction were taken in August 2022 from ground level from the American side of the project. Click on each image to see a larger version. 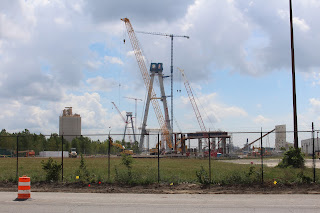 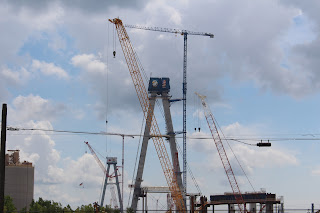 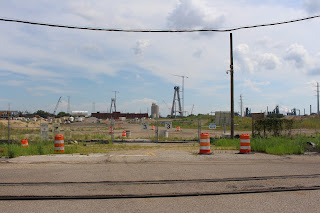 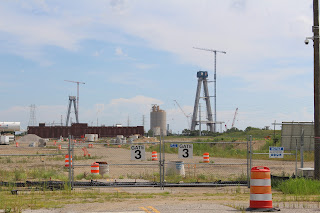 The following pictures of the construction were taken in August 2022 from the air from the American side of the project. A DJI quadcopter drone was utilized for these images. This area of South Detroit offers ample opportunity to take in the scale of this project from the air, but please remember to do so safely and within the means of your experience and equipment level. Click on each image to see a larger version. 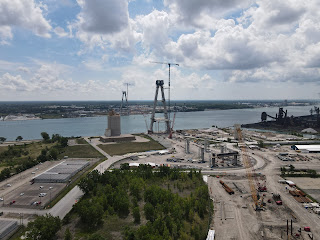 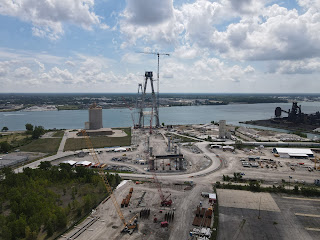 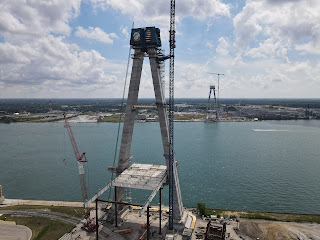 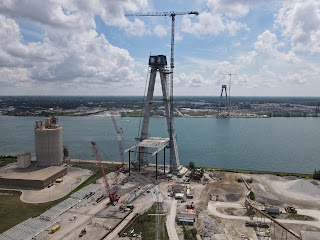 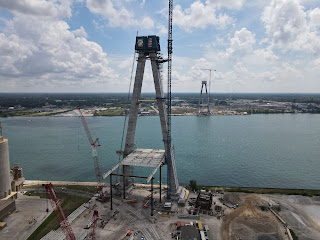 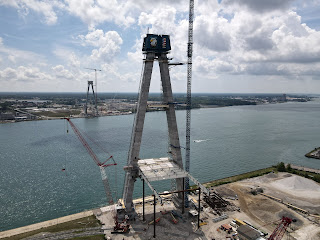 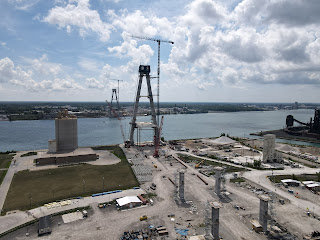 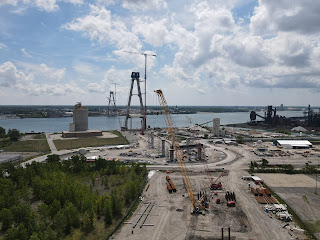 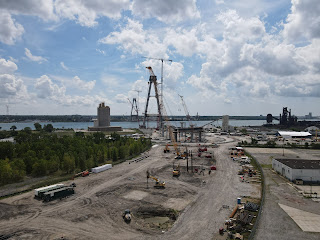 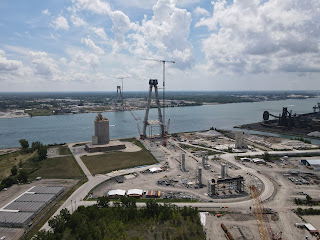 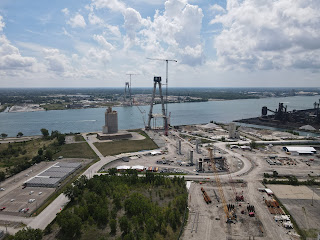 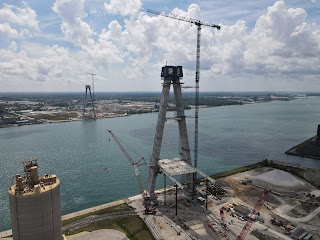 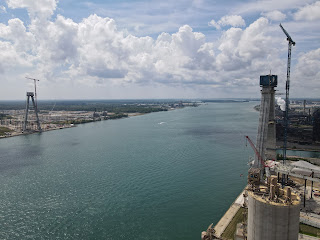 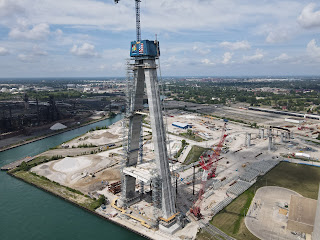 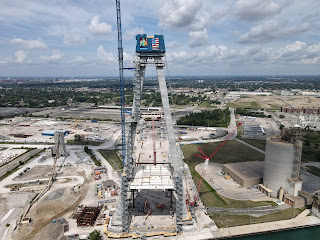 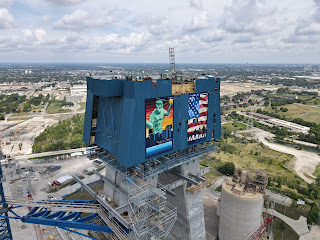 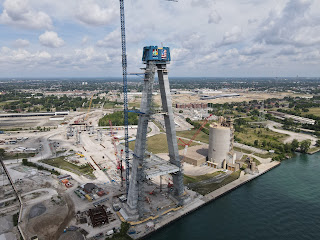 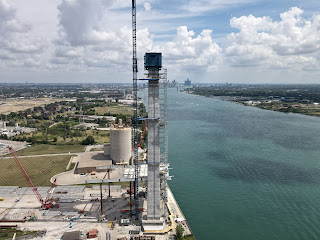 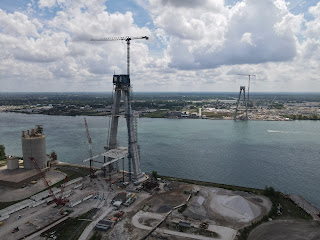 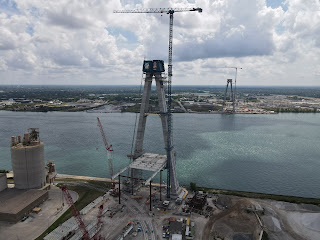 Information about the Windsor-Detroit Bridge Authority, courtesy of Wikipedia
Main Project website for the Gordie Howe International Bridge
How to Get There: