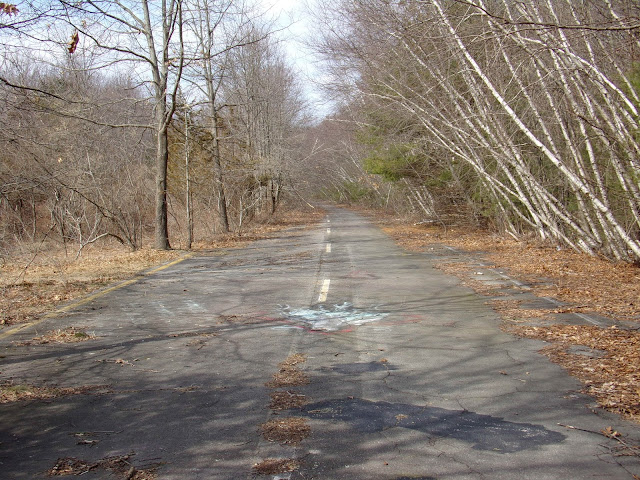 What is now a popular recreational trail in the northeastern Massachusetts city of Newburyport was once a northbound alignment of Interstate 95, and before that, part of a relocated US 1. A trip down this 1.1 mile long abandoned section of highway shows a road that was left mostly intact, complete with the original pavement, curb cuts and pavement markings. But there is a story about how this highway became a trail...

Originally conceived to be part of a relocated US 1, the stretch of road that is now the abandoned section of I-95 in Newburyport was part of a highway that was constructed between 1951 and 1954 from modern day US 1 in Danvers, Massachusetts and ended just south of the state border between Massachusetts and New Hampshire in Salisbury, Massachusetts. The highway was originally constructed with three 12-foot wide lanes in each direction, although the rightmost lane eventually became a hard shoulder for the road. The highway was not Relocated US 1 for long, as it became I-95 in 1956 once the Interstate Highway System came into existence.

The highway stayed in this manner for a number of years. However, from 1973 to 1977, the Massachusetts Department of Public Works had reconstructed I-95 to provide four lanes of traffic in each direction from just to the north at the nearby Whittier Bridge over the Merrimack River south to US 1 in Danvers. As it pertains to Newburyport, between MA 113 (Storey Avenue) and Hale Street, I-95 was constructed on a new alignment just to the west of the existing I-95 alignment, which meant that the old northbound lanes had become abandoned and allowed to lay fallow. Outside of some pavement striping testing performed by MassHighway (the successor to Mass DPW and the forerunner to MassDOT), along with proposals to build an access road to a nearby industrial park as well as a sewer line, the old road lay dormant.

Then in 1995, the Commonwealth of Massachusetts came into an agreement with the City of Newburyport where the land that included the abandoned I-95 was to be transferred to the City of Newburyport, at no cost. The stipulations for the land transfer agreement were that the land had to be perpetually left as open space, and if the land ever needed to go back into state control, it could be taken back by the Massachusetts state government. The end result was the recreational bike and walking path that is part of the Little River Trail System, named after the Little River that has its headwaters and wetlands along the southern stretches of the abandoned I-95. This became a recreational trail in 2001, when the Parker River Clean Water Association received permission to construct a bike trail along abandoned I-95 and the trail was named after Gloria Braunhardt, a local resident who led citizen's efforts to preserve the wetlands around abandoned I-95 from other development.

Because the old road was well built, the original pavement and grading was kept mainly intact, with access points at both the MA 113 (Storey Avenue) and Hale Street entrances having been built. A viewing platform was built at the wetlands near the southern entrance at Hale Street as well. I also understand that there are some geocaches that can found around abandoned I-95 as well. There is parking for about five vehicles at Hale Street and for about three cars at the northern entrance at MA 113. There is also a park and ride on the opposite side of MA 113, which can also be used to access the William Lloyd Garrison Trail, which is another recreational path, one which actually crosses the Merrimack River at the Whittier Bridge with I-95. In all, the trail is a great way to have a firsthand and fun look at the history of I-95 and an earlier era of transportation history.