By Adam May 13, 2017
The National Road travels through and plays a large part in Southwestern Pennsylvania History.  Entering the state on Route 40 from Maryland at the State Line, a remnant of Pennsylvania's automobile past can be seen.  It is an old state line marker made of concrete and was most likely at the time over 50 years old. When I took these photos in 2000 or 2001 the marker was mainly intact.  Today, the marker it appears that the marker is no longer there.  There is also a stone marker for the Mason-Dixon Line where the National Road crosses the state line.  I had never noticed it, but Pete Zapadka has. 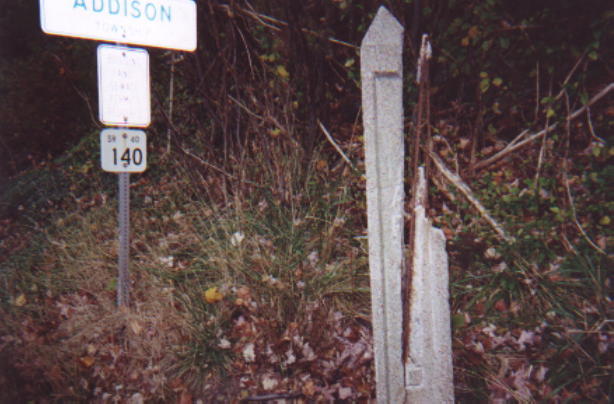 The first town in Pennsylvania, Addison, sits a few miles west of the Dixie Motel.  Here, along an old alignment of US 40, sits an original piece of the early National Road.  The Petersburg Toll House, built in 1835, still stands today.  The toll house which collected tolls until 1906 is owned and preserved by the Great Crossings Chapter of the Daughters of the American Revolution.  The state of Pennsylvania donated the building to the chapter in 1949.

The Petersburg Toll House was one of six Pennsylvania Toll Houses along the National Road.  Of the six, Petersburg and the Searights Toll House (to the west of Uniontown) are the only two toll houses still standing.  A third, the LaValle Toll House, is located in Maryland. The tollkeeper lived at the toll house rent free and was paid an annual salary.

The Petersburg Toll House is constructed of native stone.  It was added to the National Register of Historic Places in 1979.  The Toll House is open to visitors by appointment only.