By Adam September 09, 2009
Over the Labor Day Holiday, I had the opportunity to go up to Michigan. I explored a heck of a lot of new territory for me, and I will have photos of that up on the blog later this month. But one of the real highlights of the trip was taking part of the 52nd Mackinac Bridge Walk on Labor Day.

Our party left got to Mackinaw City at about 7:15. There was a long back up at Exit 337 so we went down the highway one mile and got off at Ext 338. There was a parking lot right across the end of the exit ramp - and we saved plenty of time (which would really come in handy not that long after).

The walk from the parking lot to the shuttle bus was just as the sun rose...and there were some great shots of the sun rise over the harbor. 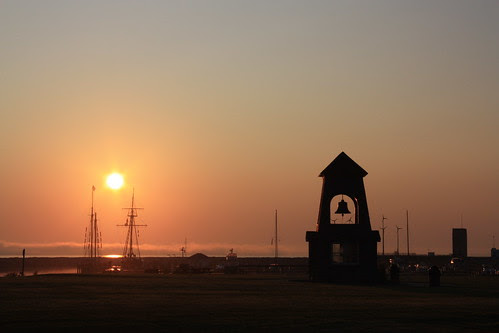 We were able to load onto to the shuttle bus to take us over to the St. Ignace side of the bridge at just before 8 am. That's when the delays started. On the southbound lanes of the bridge - two pick up trucks either got in a fender bender or stalled out. (There were various stories on what happened.) And it took us nearly an hour and a half to cross the bridge. I did manage to see the two trucks being hauled out on flatbed - it did look like they may have wrecked.

We started the walk at 9:20...and the one thing we noticed was the fog was starting to roll in from Lake Huron and the East...made for a dramatic sight!

Here I am at just about the start of the walk - you can see the fog behind me. 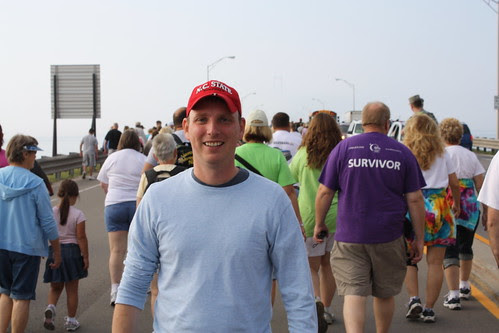 This shot probably was taken when the fog was at its thickest. 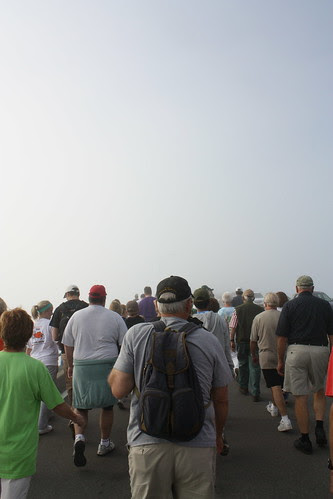 One of my favorite shots of the sun trying to burn through the fog over Lake Huron. 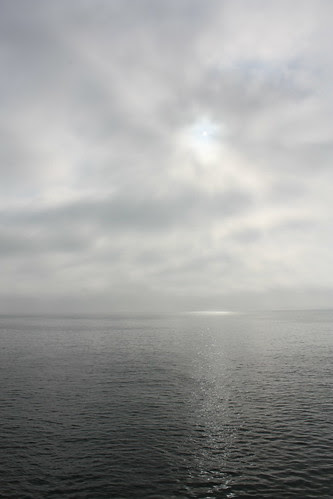 You can really see how the fog came through in this photo. 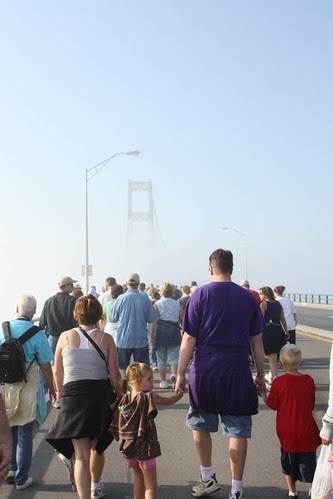 The fog slowly began to lift -but the mist from the fog was a great way to keep cool during the walk. And the impressive height and size of the bridge's towers really came into view.

While walking the main span of the bridge...there was a father carrying his daughter sleeping almost perfectly still in his arms. To me - it was the best shot of the walk. 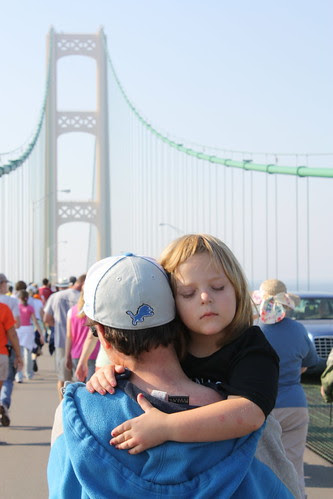 Near the end of the walk, the fog had mostly lifted and a clear view of the bridge could be seen. 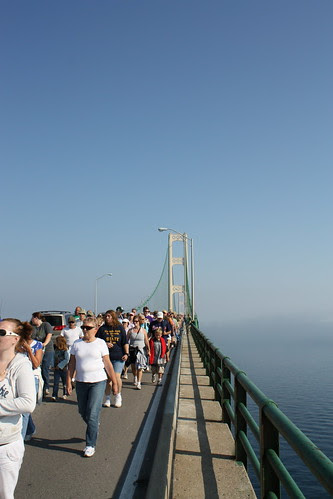 And here it is - five miles later - the 'Finish Line' - a welcomed sight to all. 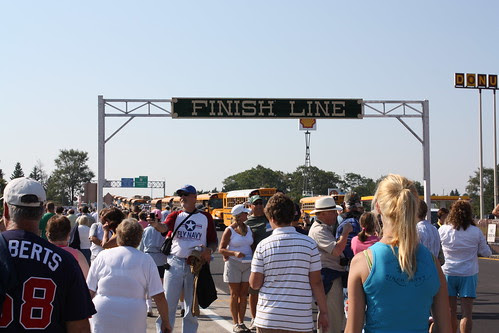 At the end of the walk - there are a ton of souvenir stands selling T-Shirts and Patches and also everyone gets a completed walk certificate. One of the unique things is for the cost of a postage stamp you can get the official postal cancellation stamp with stamp on your certificate. It's a nice and inexpensive way to commemorate your experience .

However, there was one other item of note. For $20 a copy of "Mighty Mac - The Official Picture History of the Mackinac Bridge

" by Lawrence A. Rubin could be purchased. The book shows the construction of the bridge and was first published not long after the bridge's completion. It's a great look at how the bridge was built. 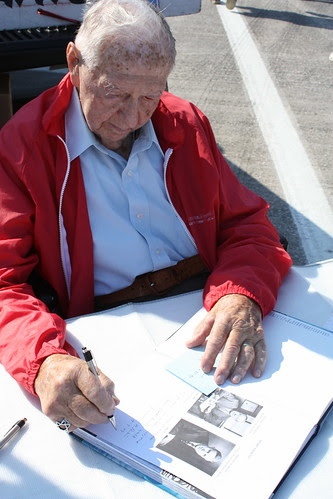 Mr. Rubin, pictured above, is still with us and was signing copies of his book - and I did indeed purchase one. You were able to ask for a simple inscription for him to write in addition to his signature. Mine reads, "To Adam, Congratulations on your first bridge walk."

Hopefully, I'll be able to make it up for a second some day.

Steve A said…
Time for a vote: Does that photogenic girl have chicken pox or measles? I vote measles.
6:39 PM