Before the Dirt Flies on the Triangle Expressway

By Bob Malme September 07, 2009
A recent news report indicated that there has been a delay in starting construction of the Triangle Expressway, the future toll portion of the 540 loop around Raleigh and connector between I-40 in Research Triangle park and 540. They blamed it on some permitting issues (maybe there now too close to NCDOT and inheriting their working traits). This gave me some time to take some 'before' photos at least along the corridor of the future Triangle Parkway that will run between I-40 and what is now the Davis Drive exit on NC 540. Starting at the northern end, or beginning: 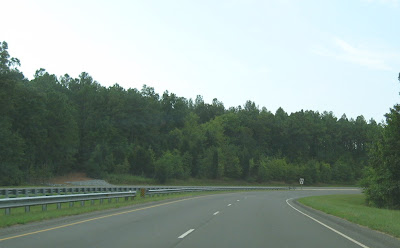 This is current NC 147 South before it takes the curve to end at Alexander Drive. The Parkway will go straight and the connection to Alexander will be eliminated. If you see the gravel on the left, this was the only sign of construction I saw along the corridor. The following photos show the ending of NC 147 at Alexander that will be removed: 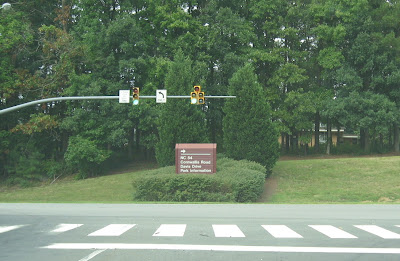 The stoplight at Alexander with signage common in Research Triangle Park. You can reach NC 54 and Davis Drive going to the right. 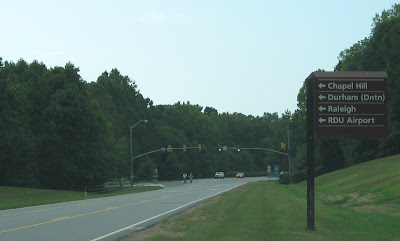 The soon to be late connection to the Durham freeway as it appears heading SW on Alexander.

Another look at the only new Parkway related construction I saw heading North on NC 147: 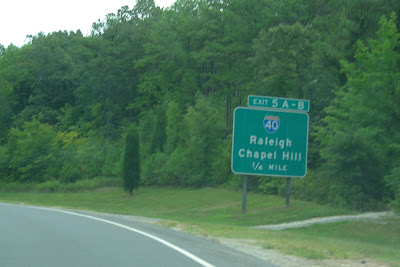 This may have been dug up to aide survey teams. The Parkway will cut across the photo probably starting near the I-40 sign and to its rear.

Heading on NC 540 West, the only signs of impending construction are new orange signs: 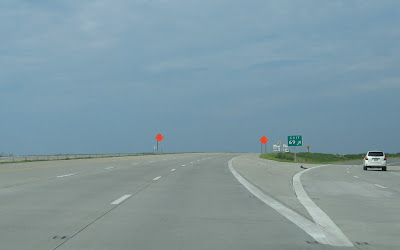 These signs are just beyond the exit ramp for the Exit 69, NC 54. 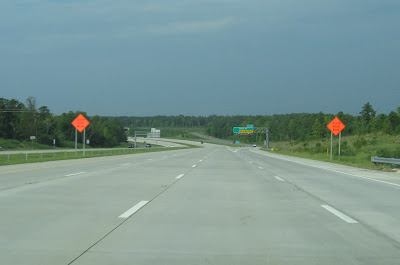 According to these signs the construction zone will begin just before the current Davis Drive exit ramp. The current access to Davis Drive will be changed and access will become part of the Triangle Parkway interchange built between the current off- and on-ramps. 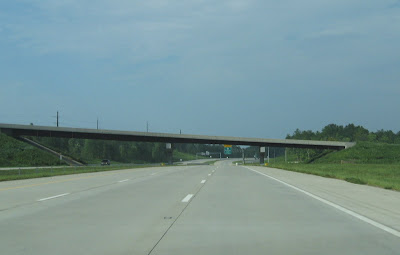 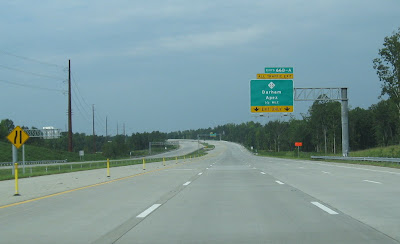 From the 'End Construction' sign you can see beyond the NC 55 exit sign, it appears, for now anyway, construction on this end anyway will concentrate on building the Triangle Parkway and not the Western Wake Freeway, the extension of NC 540.

As if there's any more evidence no construction has started: 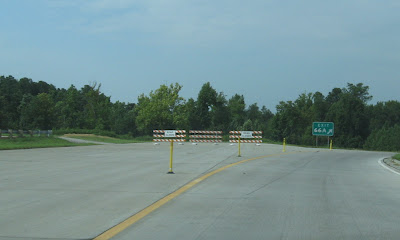 This is the western end of NC 540. The site of the August groundbreaking can be seen on the left side. The access road and the ceremonial dirt put up next to where the stage was built still sitting there.

Finally here's where traffic on NC 55 will access the toll route west, then south toward Apex: 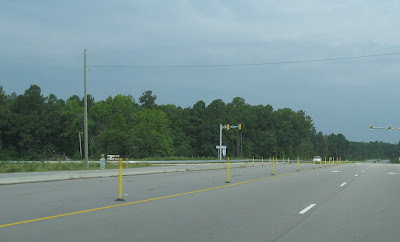 I will be back to this area, once the constant Turnpike Authority phrase "Construction could start in the next couple weeks" rings true.

brett said…
i've seen several times that the current end of 147 at alexander dr will be closed when the freeway is extended. but what if they did this instead: 1) close the northbound lanes entirely; 2) leave the southbound lanes open as an exit from 147 south to alexander dr.; 3) construct an entrance ramp from alexander dr. to 147 south at the current intersection; 4) construct an exit/entrance pair (entrance being a long loop) to and from northbound 147 to 54, maybe with the ramps ending at the intersection with park circle dr. 1/4 mile east of where 54 passes over 147. the latter may be too close to i-40 to be safe but the former shouldn't be a problem, eh? has anyone thought of this idea before? it could help mobility around not only south durham but also that section of rtp and keep maybe a small amount of traffic off of i-40.
11:48 AM

Anonymous said…
Anyone here know whether they're going to reconstruct the exit from South NC 147 to East I-40 to a flyover and right entrance instead of the horrid left entrance? Or would that be in conflict with the nearby Davis Drive exit?
12:11 PM

Anonymous said…
This comment has been removed by a blog administrator.
7:17 AM