By Bob Malme September 19, 2009
I spent a week on vacation in Kentucky (will provide details in a later post). On my way last Saturday (9/12), I decided to check whether NCDOT had followed up on its pledge in its 8/20 news release to complete the I-40 move related re-signing in 'about 3 weeks'. Well, they're close, but no cigar as of yet. The first change noticed is that they finally filled out the first signs for the Loop heading west on I-85South/I-40 West: 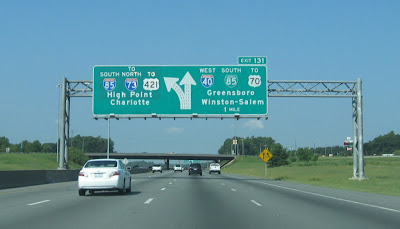 They've added the predicted I-73 shields below what was a blank under 'To North.' Why that had to wait until now, when I-73 was signed on the Loop a few months back, only NCDOT knows. This is the farthest reference to I-73 being about 12 miles from the route itself. 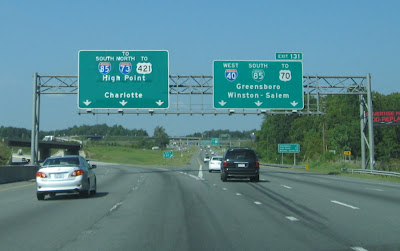 The signage at the split, from looking into the distance, the last old I-85 Business exit numbers have been removed for the next exit on I-40. Notice the promised painted shields on the highway denoting which lanes are I-85's and which are I-40's have yet to make an appearance.

All the small green signs noting the route numbers along the Loop have finally been changed: 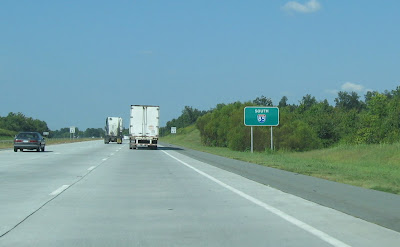 This makes the I-85 signs heading south before US 421 seem a bit too big. While the rest: 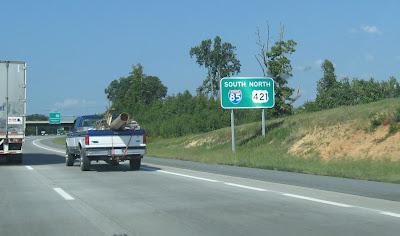 Simply required moving the I-85 shield and direction to the left hand of the sign.

If some people complain that NCDOT sometimes doesn't put up enough signs for following a route accurately, you cannot say that with US 421 North: 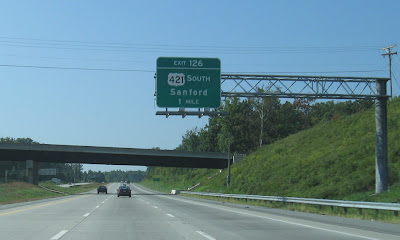 First, they subtly changed the exit sign to make US 421 South to Sanford the primary information. Second, if you couldn't tell where was US 421 North was they added signs prior to the former US 421 North exit: 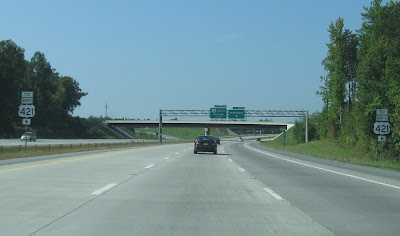 And, if that was not enough... 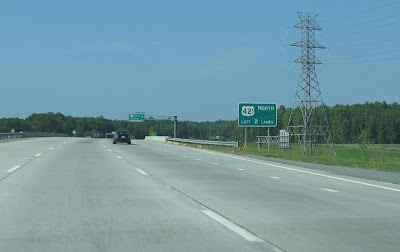 They added another sign past the former North exit to tell you to stay on I-85.

As far as the changes to the I-73 portion are concerned. They finally changed the left-hand sign before Wendover Ave. heading southbound that had the last reference to I-40 (no photo). They previously had updated the smaller green signs removing the I-40 references: 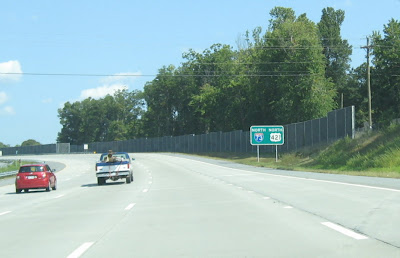 And changed all the exit numbers. There was still one sign, however, not completely changed: 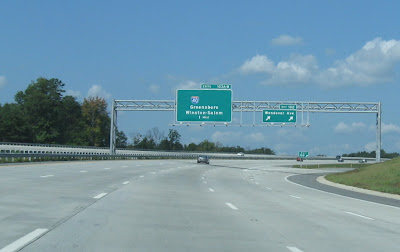 This is the first sign for what should be I-40 and North US 421, the latter hasn't made it up there yet. The remainder of the signage northbound is correct: 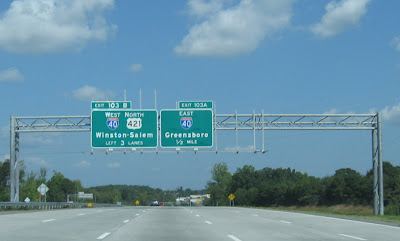 I imagine the blank space to the right on this overhead sign will in the future have the East 40 sign and a reference to I-73 and I-840 will occupy the middle.

Finally, while I've already shown the signs at the split: 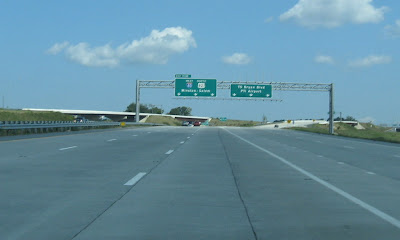 This photo shows it from the perspective of heading onto I-40 instead of continuing on I-73. Notice again no painted shields, nor were there any, as far as I could tell, heading the other way on I-40 before the eastbound split. All of this guarantees, unless someone else wants to do the job, another trip to Greensboro for yours truly to get additional photos.