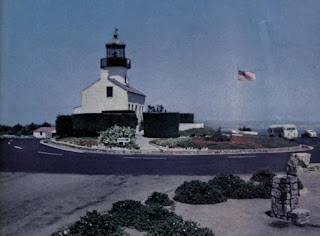 US Route 80 was one of the original US Routes which was designated during November 1926.  The original definition of US Route 80 had its western terminus located in San Diego, California.  US Route 80 originally had a western terminus in downtown San Diego at US Route 101.  Rumors have persisted for years in the road-fan community that US Route 80 was once extended to Point Loma before being truncated out of California during 1966.  Until now, not much substantial evidence has been found pertaining to the possible extension of US Route 80 to Point Loma.  Featured above is the cover photo of the November/December 1958 California Highways & Public Works which depicts the parking area on Point Loma and Cabrillo National Monument.  The cover photo excerpt in the November/December 1958 California Highways & Public Works notes the parking area at end of Legislative Route Number 12 to be the terminus of US Route 80 at Point Loma. 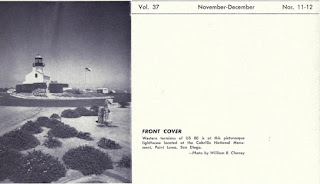 The history of how US Route 80 likely got to Point Loma
Disclaimer: this blog contains far more conjecture than one will normally see in a Gribblenation blog related to a California highway.  The above notation of US Route 80 terminating at Point Loma thus far is the only really credible document to overtly state it was ever extended west of US Route 101 in the San Diego area.  Much of the remaining evidence is largely circumstantial and consists of indirect references to US Route 80 reaching Point Loma.
The initial draft of the US Route System was approved by the Secretary of Agriculture during November of 1925.  The US Route System within California was approved by California Highway Commission with no changes recommended which can be in a document contained in the January 1926 California Highways & Public Works.  US Route 80 is described as terminating at an undisclosed location in San Diego via what was Legislative Route Number 12 (LRN 12) and the Old Spanish Trail.

The US Route System was approved by the American Association of State Highway Officials (AASHO) on November 11, 1926.  The designation of the US Route System in California did not confer much more than general corridor routings.  The Auto Clubs did not begin to sign the US Routes in California until 1928.  Given the State and Division of Highways were not permitted to maintain urban highway mileage until 1933 there was far more discretion by local authorities as to the location of the US Routes in major cities.  The timeframe for the signage of US Route 80 in San Diego is unclear but it is inferred to terminate in downtown to US Route 101/Broadway via 4th Street on the 1930 Division of Highways Map. 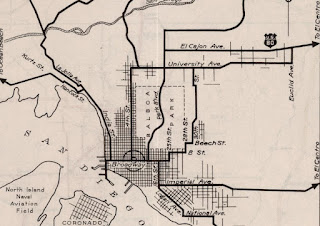 The October 1931 California Highways & Public Works describes a hearing held by the California Highway Commission in San Diego.  During the meeting an advocate for San Diego County expressed a local desire to have US Route 80 extended to Point Loma under the pretense that it would make for a truly coast-to-coast corridor (by then US Route 80 had been extended to Tybee Island in Georgia). 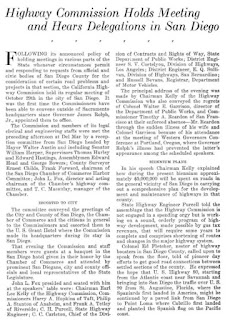 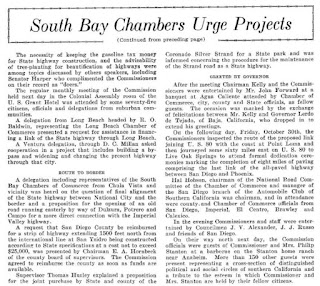 The August 1934 California Highways & Public Works announced the completion of LRN 12 west of US Route 101 to Point Loma and Cabrillo National Monument via a modernized El Camino Cabrillo.  The modernized highway carrying LRN 12 to Point Loma is stated to have been dedicated on July 16, 1934 and ended at the Old Spanish Lighthouse parking area.  The article makes no mention to an extension of US Route 80. 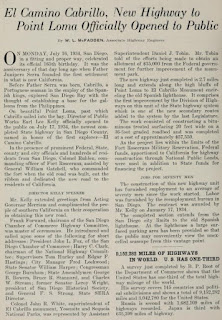 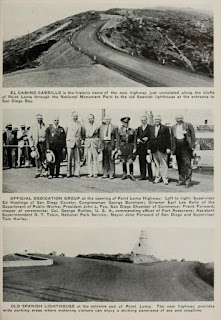 The 1938 Division of Highways Map displays US Route 80 ending in downtown San Diego via multiplex with US Route 395 on Park Boulevard at US Route 101/Broadway. 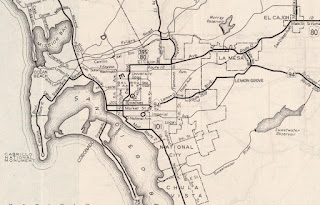 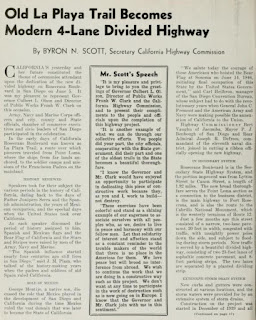 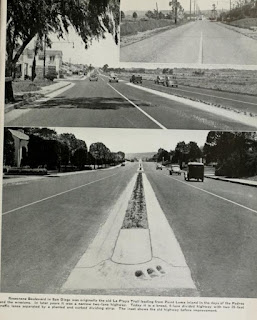 The November/December 1943 California Highways & Public Works features a new interchange on US Route 101 with LRN 12/Rosecrans Boulevard and Mission Valley Boulevard.  Notably the Exit signage to Point Loma does not depict US Route 80. 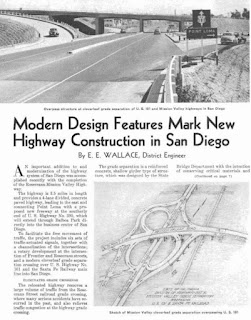 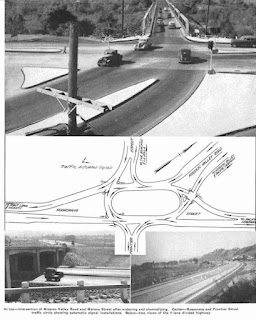 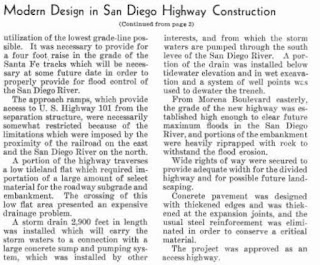 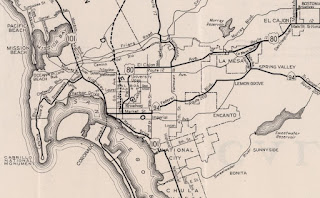 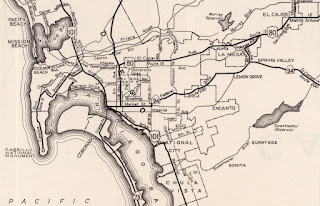 The January/February 1951 California Highways & Public Works provides an update to US Route 101 and the Montgomery Freeway.  The attached article map depicts US Route 80 as ending in downtown San Diego. 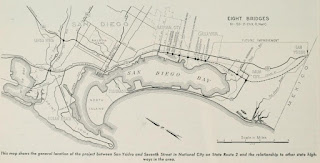 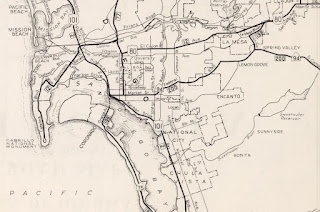 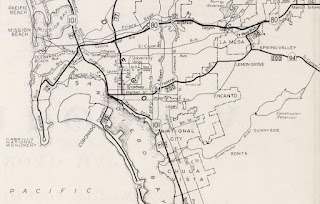 The July/August 1955 California Highways & Public Works refers to Rosecrans Boulevard/LRN 12 between Lytton Street and Pacific Highway as part of US Route 80.  This is the first known instance of US Route 80 being referenced as existing west of US Route 101 towards Point Loma.

As noted in the intro, the November/December 1958 California Highways & Public Works specifically states US Route 80 ended at the Old Spanish Lighthouse at Point Loma.  There is no instance of a documented request by the California Division of Highways to the AASHO to extend or realign US Route 80.  It is likely such a request was not necessary given the movement of US Route 80 was entirely contained to San Diego and did not require a redefinition of the highway. 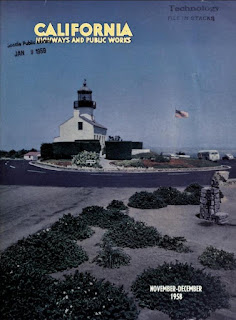 The May/June 1961 California Highways & Public Works describes the freeway corridor of US Route 80 as ending at US Route 101.  The actual endpoint of US Route 80 is not clearly conveyed in the article. 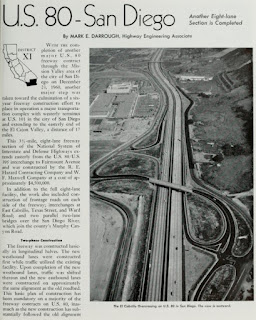 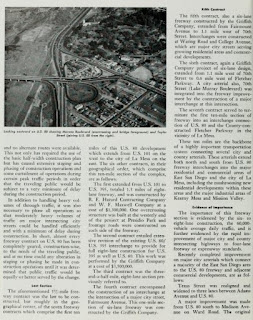 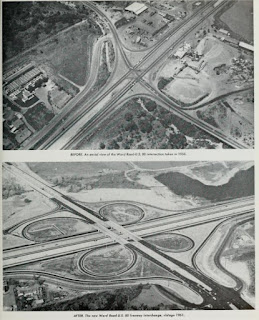 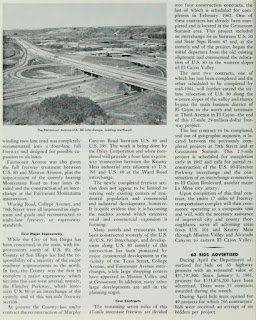 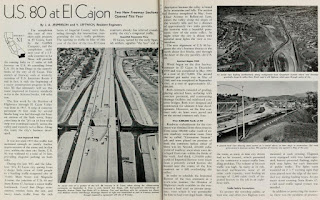 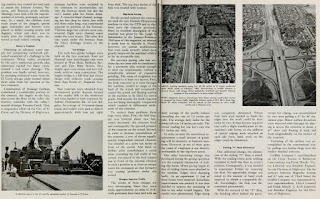 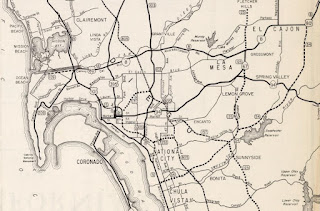 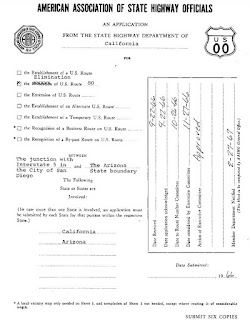 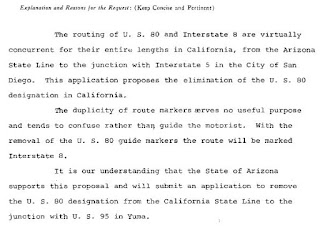