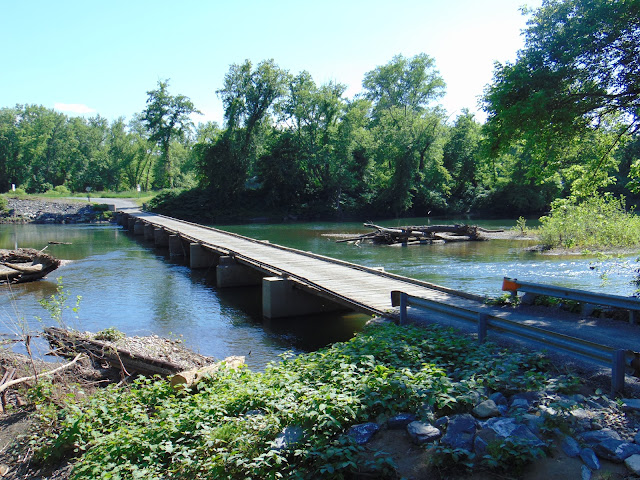 The Oldtown Toll Bridge linking Oldtown, Maryland over the Potomac River with neighboring Green Spring, West Virginia is only one of a few truly privately owned toll bridges located in the United States. It's a simple bridge by design, as the 318 foot long Oldtown Toll Bridge is a low water bridge. Low water bridges are designed to allow water to safely and efficiently flow over the bridge deck. Additionally, a dozen concrete pedestals have been secured in the Potomac River in order to support the bridge and wooden deck.

The bridge was constructed in 1937 when a gentleman by the name of Mr. Carpenter obtained the proper permits to build the Bridge through an Act of Congress. This was a blessing for residents, especially on the West Virginia side of the Potomac River, as it saved motorists commuting to Cumberland an hour in travel time. Using Mr. Carpenter's blueprints, the Army Corp of Engineers and a number of local laborers constructed the bridge and it remained under the same ownership for 34 years until 1971.

Today, the Oldtown Toll Bridge remains as a popular and unique way to travel across the Potomac River. Local businesses and residents depend on the bridge to make travel to such destinations as Cumberland, Maryland a relatively quick jaunt. The bridge's location down the road from Lock 70 of the historic Chesapeake & Ohio Canal makes this a historically interesting area to visit. The Oldtown Toll Bridge also has a number of campsites nearby, and the bridge is also used for recreational purposes along the Potomac River, such as for boating or fishing. I had the opportunity to check out this simple bridge over Memorial Day Weekend in 2022 and had an enjoyable time finding out what the Oldtown Toll Bridge is all about.

Br0kenR0ads said…
CHEcK OUT this video of crossing the old town toll bridge.
7:36 AM