By Doug March 19, 2019
Ontario's oldest surviving bridge is located in the picturesque village of Lyndhurst, in the eastern part of the province. Constructed in 1857 over the Gananoque River, some 10 years prior to Canadian Confederation, the Lyndhurst Bridge is a beautiful and traditionally designed three arch bridge made of local field stone and local Nepean sandstone. The Lyndhurst Bridge was designed and constructed by local residents. While the bridge was built by Miles Fulford and Simon Ransom, the bridge was designed by an employee of a local mill owner, Scottish native John Donald Roddick, who came to Lyndhurst about 1853. It is said that the design of the Lyndhurst Bridge is similar to older bridges that are in Scotland. Using local materials also meant that the bridge was able to use some local touches in the construction of the bridge, such as mill stones from local mill owner Henry Green for decoration. 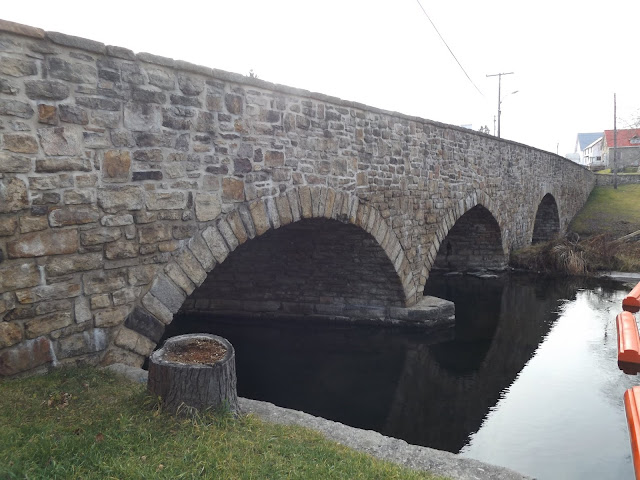 Once the bridge was completed, it became the focal point of the Lyndhurst community, which was once home to five mills at the time the bridge was built. The arches of the bridge also divided the water rights between the mill owners, one of whom was John Donald Roddick. The Lyndhurst Bridge still is a focal point of Lyndhurst, and while traffic only holds one lane at a time, the bridge was strengthened in 1986 by the addition of a load bearing concrete slab inside the deck system. While this retrofitting relieves the bridge from having to bear the loads of traffic, but some engineering historians may not be thrilled that the arch no longer serves a functional purpose. The alteration is not visible to anyone since it is hidden under the deck, and it likely prevented the need for alterations to the stonework, which appears to retain its historic integrity. Today, local residents and curiosity seekers can enjoy the history and uniqueness of the oldest bridge in Ontario by taking a stroll across the bridge or viewing it from nearby Furnace Falls Park.

The surrounding village of Lyndhurst is also worth checking out. If you have some time to poke around town, it is certainly a charming place to visit.