By Challenger Tom March 13, 2019
After descending Harper's Corner Drive through Dinosaur National Monument to US Route 40 I began a southward course towards Grand Junction.  My route south took me over Colorado State Route 64 where I connected to Colorado State Route 139.  CO 139 south was my route over the Book Cliffs via Douglas Pass. 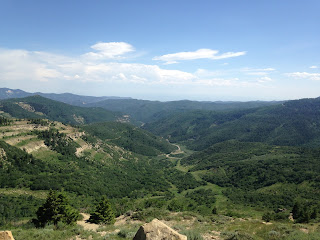 This blog serves as Part 19 of the 2016 Summer Mountain Trip Series, Part 18 can be found below:

CO 139 is an approximately 72 mile north/south state highway connecting from CO 64 in Rangely to I-70 near Loma.  CO 139 through its course travels through rural regions of Rio Blanco County, Garfield County and Mesa County.  CO 139 south of Rangely follows Douglas Creek and the surrounding canyons on a somewhat rugged trek towards Douglas Pass in Garfield County.  Douglas Pass is relatively low by Colorado standards at 8,268 feet above sea level but is one of the few good roads over the Book Cliffs. The Book Cliffs are a long series of desert mountains mostly made of sandstone which lie in western Colorado and eastern Utah.  The actual "cliff" part of the Book Cliffs largely lie at the edge of the Tavaputs Plateau.

Part 20 of the 2016 Summer Mountain Series can be found below: