By Challenger Tom November 30, 2018
In far eastern Citrus County along the Withlacoochee River there is a small ghost town known Pineola along former Florida State Road 39/County Route 39.  Pineola once was a siding of a Atlantic Coast Railroad line which as the sight of the "Great Train Wreck of 1956." 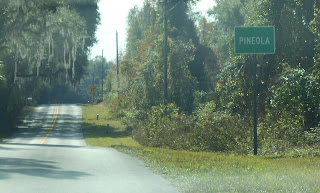 The former Atlantic Coast Railroad line is now part of the Withlacoochee State Trail which details the Great Train Wreck of 1956.  The Great Train Wreck of 1956 was a head-on collision between two trains; one heading south from Dunnellon and the other heading north from Croom.  Both trains were heading towards each other with a full payload of freight at speeds close to 50 MPH.  The wreck was blamed on foggy conditions leading to a failure to notice that both trains on the same track until was too late.  Apparently both trains had just been fitted with radios which the engineered involved refused to use until they were given pay as radio operators.  Apparently one of Croom Station agents attempted in vein to intercept the northbound train along what was FL 39.  The actual historic marker on the Withlacoochee State Trail can be observed:

hmbd.org on the Great Train Wreck of 1956

The site of the Great Train Wreck of 1956 can be observed from CR 39 in Pineola. 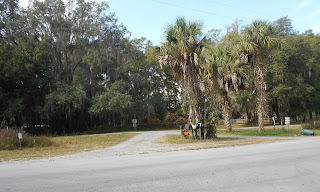 FL 39 originally ran from Hopewell at FL 60 north to FL 48 in Floral City.  FL 39 was a hidden designation of US 98 Zephrhills north to Ridge Manor where it split north along the Withlacoochee River to FL 48.  This 1956 State Highway Map shows the alignment of FL 39 north of US 98 as a Secondary State Road.

Pineola was originally the site of a Limestone Mine in the Pineola Grotto.  The Pineola Grotto apparently hosts various unique plant species and may have hosted more in the past.  Pineola first appears on the 1895 Citrus County Map.

Jim Grey said…
What an incredibly thorough treatment. You put a lot of work in here and it shows.
11:22 PM